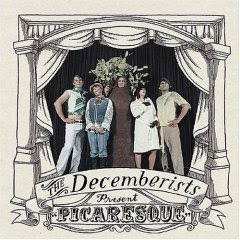 
The few earlier albums I've heard by The Decemberists certainly meet a description I found on amazon.ca --> Pirate folk songs. This 2005 album fits the same mold, but adds a rockier band to the tunes (more electric guitar, organ and increased tempos). There's always a hint of something macabre or perhaps impending doom somewhere in the stories related via the nasally vocals of Colin Meloy. But whether there's violin, accordion or standard rock band instrumentation, the tunes themselves shine through as memorable - not just hummable, but something you actually want bouncing around your cranium.


The Barbara Stanwyck celebration continues...The original full length version of this film recently screened on TCM (complete with an additional 5 minutes that censors removed back in 1933) and it was a revelation. Not just the lurid events of the film (risque in the early thirties, but this was before the production code came into effect), but because of Stanwyck's performance. She's gorgeous obviously, but her sexiness and feminine charms dominate every single man she meets in the movie - and you absolutely believe each and every one of them would fall under her spell. I know I did...


An amusing tale of one woman's frustration with the male gender and her experimentation with the world of same sex dating. And though many hang ups show up on all sides (hetero, homo and bi) as her new relationship begins, it turns out that the same basic stuff shows up in just about any relationship. This commonality across all people as well as the extremely likeable performances by the two main female leads makes this a film that's a step up from your basic "turn your brain off" romantic comedy. You care about these recognizable realistic characters and manage to be entertained without having to roll your eyes or be subjected to a montage backed by classic 60s Motown music.


Ingmar Bergman passed away today. I'm not well versed in Bergman's oeuvre (my favourite film of his - Smiles On A Summer's Night - is his least representative), but anything I've seen by him leaves a lasting impact. Whether it's the highly erotic telling of a beach encounter by the young nurse in Persona or the family shattering events of The Virgin Spring, you can't easily shake a Bergman film afterwards. He doesn't seem to shy away from questioning things...anything (a common target is religion and its worth). The answers you may find in his films likely will depend highly on your own biases coming in, but likely Bergman will make you think about it from a different perspective.


Psychological horror and squeamish toe curling scenes battle it out in this occasionally darkly comedic tale of an awkward young woman named May. Awkward is too kind really - she's almost unable to function in "normal" society. As her relationships don't quite pan out the way she wants, she starts to focus on what she likes best about these people - individual characteristics like hands or ears. And since she can't really find a friend that she can relate to, she decides to make one...Angela Bettis delivers a really creepy yet somehow sympathetic performance as May.
Posted by Bob Turnbull at 14:51