Professor Severus Snape's Sorcerer-Tastic, Muggalicious Mid-Summer Movie Quiz is upon us. Now go take it and post answers before Snape turns you into a 3-headed goat or resets your blog's template changes.

1) Second-favorite Stanley Kubrick film.
At this moment, The Killing is leaning in to the wire to be my fave, so I guess that makes Clockwork Orange the runner-up. Man, the field is in tight behind them though...

2) Most significant/important/interesting trend in movies over the past decade, for good or evil.
Hard to deny the onset of DV and its use by major filmmakers, but I find the most interesting trend is the desire to make films (even comedies) longer than 2 hours - ie. typically way longer than necessary. A huge generalization of course, but I've been surprised at how the studios are allowing these longer films. The previous line of thinking was to keep them shorter to squeeze in additional showings, but I guess they've already given that up since each film is preceded by 15 minutes of commercials and 5 trailers. Perhaps their studies have shown that there's a benefit to the longer film? More snack trips due to the frequent bathroom breaks? 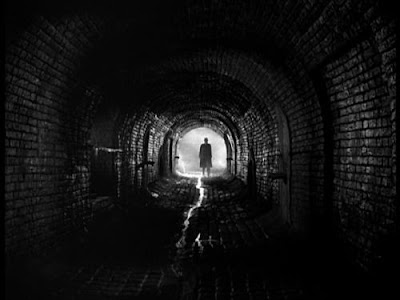 6) Has the hand-held shaky-cam directorial style become a visual cliché?
Only when the director doesn't know how to use it.

7) What was the first foreign-language film you ever saw?
Some strange slapstick French comedy when I was about 8. I'd love to know what it was, it's just that I can't remember a single thing about it. Likely I would hate the thing now. Granted, French was my second language growing up and I was actually going to a French elementary school at that time, so perhaps that doesn't count...

8) Charlie Chan (Warner Oland) or Mr. Moto (Peter Lorre)?
Neither - simply because I haven't seen a single one of their movies. Still, Peter Lorre would be hard to beat. 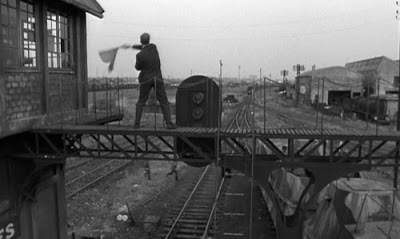 10) Favorite animal movie star.
The dogs who portrayed Quill, the seeing eye dog (as puppy and as the older working dog). Not a great film, but far better than I ever expected it to be.

11) Who or whatever is to blame, name an irresponsible moment in cinema.
The ending of Julio Medem's Chaotic Ana when the heroine...

13) Name the last movie you saw theatrically, and also on DVD or Blu-ray.
Unfortunately, the last theatrical screening I saw was Ice Age 3: Dawn Of The Dinosaurs - not terrible, but just not overly satisfying. On DVD it was the Danish film How To Get Rid Of The Others - pretty much the same reaction for that. Though Louise Mieritz was quite excellent in it. 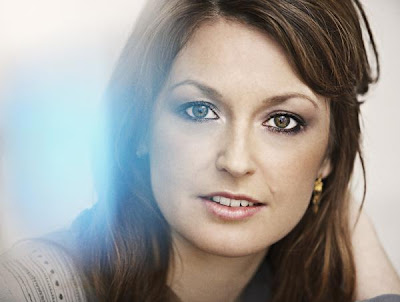 15) What is your favorite independent outlet for reading about movies, either online or in print?
Blogs, blogs, blogs and more blogs. I like blogs.

16) Who wins? Angela Mao or Meiko Kaji? (Thanks, Peter!)
Does it matter who the competition is? Kaji can wipe you out with a stare and a sneer.

17) Mona Lisa Vito (Marisa Tomei) or Olive Neal (Jennifer Tilly)?
I'm quite fond of them both, but Mona Lisa is memorable in every scene she has.

18) Favorite movie that features a carnival setting or sequence.
Carnival Of Souls is the first thing that jumped to mind so I'm sticking with it. 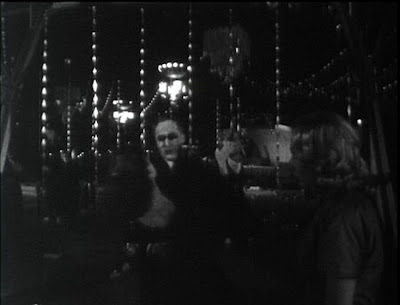 19) Best use of high-definition video on the big screen to date.
Michael Mann was the first name that came to mind and Collateral sure is purty (a good film too), but two others overtook it after some reflection: Helvetica (they made the Helvetica font look good...) and Russian Ark (a single continuous, glorious-looking 90 minute shot).

20) Favorite movie that is equal parts genre film and a deconstruction or consideration of that same genre.
Again, let's go with my first thought: Behind The Mask: The Rise Of Leslie Vernon. It's a mockumentary and a spoof of horror films that becomes its own horror film towards the end.

21) Best Film of 1979.
Monty Python's Life Of Brian makes me laugh like just about no other movie, except perhaps that scene in the same year's The In-Laws where Peter Falk is describing a great chicken sandwich. In the end though, Breaking Away is probably my favourite of that year. I can't help but think that so many of the "indie comedies" of this past decade are simply trying too hard to be this film - and they can't touch it.

22) Most realistic and/or sincere depiction of small-town life in the movies.
A Gentle Breeze In The Village is a beautiful sweet tale of a young girl transitioning from her one room schoolhouse into adulthood. I don't know how realistic this depiction of a small Japanese mountain village is, but it sure is sincere. Directed by Nobuhiro Yamashita (who also did Linda Linda Linda), I desperately hope this gets wider North American release.

24) Second-favorite Francis Ford Coppola film.
Well, if you count The Godfather I and II as a single film, then Apocalypse Now would be my second favourite. If you don't count them as one, then I cannot fulfill the requirements of this question.

25) Name a one-off movie that could have produced a franchise you would have wanted to see.
The Incredibles. How great are those characters?

26) Favorite sequence from a Brian De Palma film.
The car crash in Blow Out is pretty great, but I'd be lying if I said it was anything else but the "Odessa Steps" sequence in The Untouchables.

27) Favorite moment in three-strip Technicolor.
The ballet sequence in The Red Shoes. Wowee. 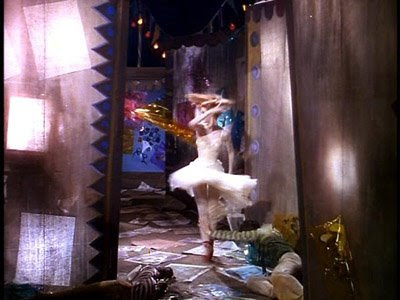 28) Favorite Alan Smithee film. (Thanks, Peter!)
I like the fact that Michael Mann credits the "altered for TV" versions of his films (at least both Heat and The Insider anyway) to Alan Smithee.

30) Best post-Crimes and Misdemeanors Woody Allen film.
I was surprised by how much I really liked Vicky Christina Barcelona - whenever the narrator wasn't talking that is. As a matter of fact, simply due to the narrator, Husbands And Wives takes the top slot.

31) Best Film of 1999.
Helluva year. Mr. Death - The Rise And Fall Of Fred A. Leuchter Jr. is possibly my favourite documentary ever and Being John Malkovich is one of the most original films I've ever seen, but it was the year Magnolia came out and I love every one of its 188 minutes.


32) Favorite movie tag line.
I'm absolutely at a loss for anything except for "In space, no one can hear you scream".

33) Favorite B-movie western.
That Budd Boetticher set was great wasn't it? Any of those would do fine, so I'll pick Decision At Sundown.

34) Overall, the author best served by movie adaptations of her or his work.
I can't quite think of anyone else but Jane Austen right now...Pride And Prejudice, Emma and Sense And Sensibility all have very good versions (some with more than one).

35) Susan Vance (Katharine Hepburn) or Irene Bullock (Carole Lombard)?
Easiest question of the whole set - Carole Lombard. OK, Irene Bullock, but I can't quite separate the two of them. Lombard makes a whiny, spoiled, rich girl endearing and attractive. I still don't quite get Hepburn, but to be fair I'm coming off having recently seen Desk Set so that doesn't help at all.

36) Favorite musical cameo in a non-musical movie.
Jeff Beck and The Yardbirds in Antonioni's Blow-Up.


37) Bruno (the character, if you haven’t seen the movie, or the film, if you have): subversive satire or purveyor of stereotyping?
I'm kinda tired of thinking about it to be honest. I've soured on the whole angle of putting people in awkward positions so that we can feel superior to them. It just lends itself to the wider issue of always looking for failure in others. Having said that, it can also be very funny at times (though I haven't seen Bruno). Therefore I end up feeling kinda hypocritical and that's why I'm tired of the question. 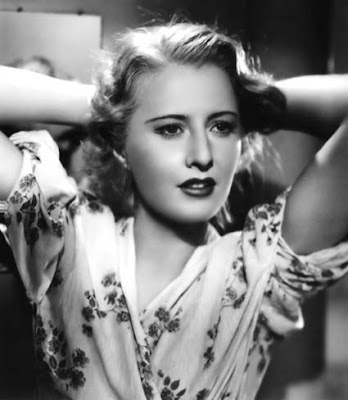 What, you think I'm going to miss an opportunity to post a screenshot of Stanwyck?
Posted by Bob Turnbull at 11:29

Ohhh I love reading these, but never write them (mostly because I could only answer 1/2 the questions!). Love the screen caps. One day I knock Carnival of Souls off my list!

Bob, fantastic list! And "The Third Man" is NOT a boring answer; it's a brilliant film. I'd have to think about it, but "On the Town" would definitely be in the Top Five.

And you know my baseball obsessions...Kevin Costner as Crash Davis is one of my favorite casting/characters of all time. Everyone always cites his "I believe in..." monologue from "Bull Durham," but my favorite scene depicts him telling Nuke, with pure honesty, "You couldn't hit water if you fell out of a f**king boat."

I'm a solid fan of Bull Durham too Jamie - there's some great moments. Unfortunately, I haven't liked any of Shelton's follow ups (that I've seen anyway). Neither Tin Cup nor White Men Can't Jump had characters that were likeable.

He does have something in development called "Our Lady Of The Ballpark" though...