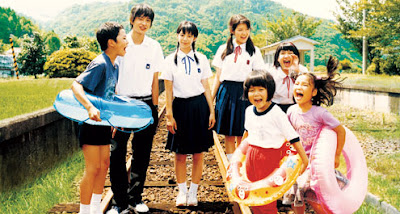 What a lovely, lovely film.

From the first shot of a field of green swaying grass, I don't think a smile left my face for the entire run time of this movie. 6 children of different ages who share the same schoolhouse in a small village in Japan are joined by a seventh - a Grade 8 student from Tokyo who has just moved back with his mother to her old town (after she split with her husband). That's pretty much the plot. We spend a year and a half with these kids and we become familiar with their habits, routines and minor quirks. And it's time well spent.

The film is mostly episodic with the main thread being the budding young romance between new boy Hiromi and Soyo. She had previously been the eldest of the school as the only Grade 8 student and is happy to welcome someone new into the fold; especially someone as cute as Hiromi. Of course there's ups and downs in the course of their relationship, but it flows so naturally - partially due to director Yamashita's use of numerous long takes during some of the scenes between the kids (he also used this very effectively in "Linda Linda Linda"). It allows the viewer to feel like they've really spent a lot of time with these people and got to know them well. It also helps that the performances of all the children are quite exceptional (Yamashita mentioned in the Q&A after the film that the rehearsal period for the film was 6 months). By the way, it's OK if you feel the need to go "awwwwwww" whenever the cute little Grade 1 girl is on screen - most of Thursday night's audience did too.

There's a strong family bond between these kids. They go to the beach together, fret when others are sick or sad and seem to really enjoy each other's company despite the age ranges. Soyo is already feeling concerned about what will happen as the older kids leave and the littlelest is left alone in the school. It's a wider concern for this kind of simple life. In his opening comments, Yamashita stated that his film wasn't a great dramatic production but that he hoped that we could find some joy in the very simple things in life. He succeeds remarkably well as I was brought back several times to my "simpler" days while I watched the group of kids play at the beach or wait for each other to walk to school. It almost feels at times that the film suggests this is the most natural way for us to live - many scenes of nature (a pool of water soaking tomatoes, hovering birds in the sky, long shots of the country side) bridge the different timeframes of the movie.

There are a number of great scenes that really capture what it's like to be an early teenager. When Soyo and Hiromi travel to Tokyo with their teachers, Hiromi is reunited with some of his former friends and starts to act like fourteen year old boys do when they get together: like an idiot. Soyo's expression of confusion and disdain while watching him wrestle with his friends is just perfect...As well, the two of them attempt several kisses during the film and those moments really bring out the awkwardness of kids trying to bridge to a more adult life. But the final kiss of the film is a warm and tender reflection of Soyo's genuine love. It's a wonderful moment in a film filled with them.
Posted by Bob Turnbull at 23:42

sounds like "to be and to have," which i loved. thanks for turning me on to this!

Hi shahn. Thanks for the reminder about Etre et Avoir...It's been on my list to see for awhile, but now I must see it!

Yamashita's "Linda Linda Linda" was released recently on DVD, so I'd recommend that as well. It's equally as good.