A young boy's imagination is a wonderful thing. And all the wild, adventurous and creative parts of it are celebrated in Garth Jennings' crowd pleasing "Son Of Rambow". And I mean crowd pleasing in the best possible sense. My Friday night showing of the film had the best audience response of the fest so far (at least that I've seen). 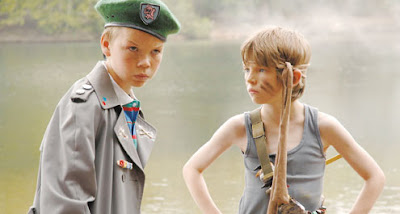 Skinny young Will is part of a strict religious group of Brethren (similar to the Mennonites) and must abide by their customs even when at school. He's not allowed to watch TV, so he must sit in the hall while his class watches educational videos. But Will's imagination is extremely active and he keeps himself busy during solitary moments via little experiments and drawing creative doodles in his notebooks.

It's during one of these hallway solitudes that he meets Carter - a boy from the class next door who spends an equal amount of time out of his classroom, but for wholly different reasons. He's a troublemaker and lives with his much older uncaring brother in their parents' large rambling house. Noting Will's trusting nature, Carter manages to con him into helping with the making of a movie he wants to enter in a contest. While at Carter's house that evening, Will sees a video of "First Blood" starring Sylvester Stallone (the time period of the film is the 80s, so "First Blood" is still new).

Rambo is a revelation to Will...In one of the film's best scenes, Will runs home pretending to be John Rambo and acting out many of his impossible feats. This includes a great sequence with a scarecrow that comes to life in Will's mind along with his own doodles and drawings. It's a terrific representation of a young boy transporting himself into another character. I know I did it and I know my son does it today (I often wonder who he and his friends think they are battling with their light sabers - their strategic planning seems to be quite involved). This new found heroic character spurs Will on to do death defying stunts for Carter's film. The staging of these stunts by the boys is inventive and brings some of the biggest laughs of the movie. 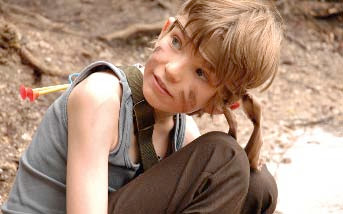 There are plenty of other sources for the humour though: A new wave French exchange student helps with the filming; a flying dog stunt makes a crash landing into a teacher's lab; the retirement home owned by Carter's family; etc. The slapstick humour almost borders on silly at times and there's a few stock conventions that are used for the story arc, but the movie has built up such good will by this point that it's easy to set that aside. The two leads are mainly responsible for this as they are both excellent in their roles. Director Jennings told the audience in the Q&A afterwards that neither had any acting experience whatsoever before making the film.

In the end, the film delivers exactly what you expected and hoped it would. It's the best kind of crown pleasing movie.
Posted by Bob Turnbull at 07:31