The full schedule of 14 feature films (and 2 themed short film screenings) to be presented at this year's Toronto After Dark Film Festival was released today.

I'm gonna try to make as many as possible, but after a quick scan the ones I'm most excited about are: 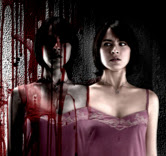 Alone - I'm a sucker for the "Asian" horror films of the last decade and good creepy atmosphere...Though the concept doesn't totally grab me - the conjoined twin who dies during surgery to separate her from her sister makes ghostly reappearances - it still looks like it may be fun with a crowd. From the directors of "Shutter". 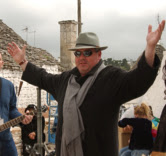 Audience Of One - A documentary about one man's vision to make a Christian version of Star Wars. Strangely enough, everything goes wrong... 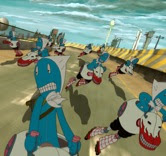 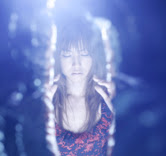 Nightmare Detective - The director of "Tetsuo" subverts the J-horror genre? Sign me up. 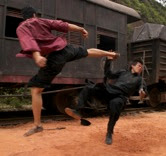 The Rebel - Vietnamese martial arts historical drama. It could be a bit cheesy and outside of the fight scenes there doesn't look to be anything not seen a hundred times before...But did I mention the fight scenes?

Other titles such as "Blood Car", "Simon Says" (with Crispin Glover) and "Murder Party" look like they will be bringing some humour to all the death and mayhem. As for "Poultrygeist - Night Of The Chicken Dead" (dancing zombie chickens!), I think it speaks for itself. 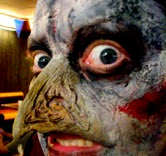 great line-up
when i was in toronto a couple years ago, the "rue morgue" people had a former funeral parlor converted into a movie theatre for horror movies. is that still operating? it'd be a great location for this festival.

I think that's Rue Morgue's House Of Horror where I think they still have screenings. Never been though...

The current festival is playing at Bloor Cinema which is a one of our large revue theatres (~800 people). It was a good 1/2 to 3/4 full for all the screenings I attended last year. They expect even more this year.

A couple o the films look fairly week, but i think we're in for a real treat. See you there!

I'm currently targeting 10 of the 14 screenings, so we'll definitely be in the crowds together somewhere...We should get little blogger tags for our shirts.

I saw Alone in Thailand. While some parts are derivative, I still liked it and find it much better than Shutter. I wrote a review of Alone on my blog.

Thanks for the comment Peter. Your review has made me even more excited to see the film now...

By the way, is there any significance to the Thai name Ploy? I saw Ratanaruang's latest film "Ploy" at TIFF and it also forced the viewer to question whether what they saw was actually happening or not - reality vs. dream vs. perception.