While reading my friend James' blog yesterday (and specifically this post), I was reminded that I've neglected to make much mention of another great Toronto film festival - the upcoming Toronto After Dark Film Festival. 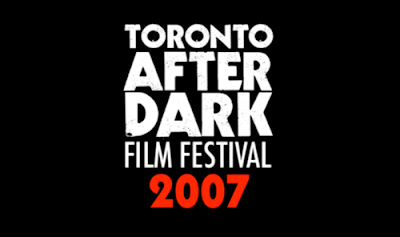 Last year was the inaugural event and it was terrific fun. As you might expect from its title, the festival mostly covers genre cinema or as their web site states "new independent and international horror, sci-fi, fantasy, action, animation, and offbeat works from across North America, Europe and Asia". I had only bought a 4-pack last year, but since the films, crowd and audience were so good (OK, 3 of the 4 films were anyway), I made a last minute decision to go see one of the final night's films as well. And I'm glad I did. This was also where I saw "Funky Forest: The First Contact" (the strangest film I've ever seen and one of the most fun - especially with the audience who came out for it) as well Kiyoshi Kurosawa's "Retribution" (when is this coming to DVD...?). 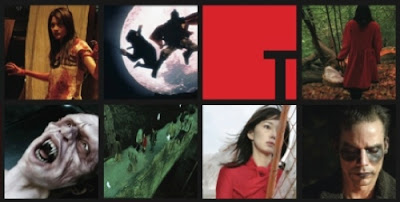 Half of this year's slate has already been announced on the web site and the remaining titles are to follow on September 26th. Tickets go on sale that day as well. Festival director Adam Lopez points out that even though their feature film slate has only grown by one, they have spread the festival out over 7 nights (from 5 last year) and:

The BIG innovation is 2 extra screenings for the first time, to cover the amazing world of international genre shorts and we have two sidebars - one fantasy and one horror themed that will knock your socks off.

And they even have great commercials! Don't believe me? Well it says here that last year's TV spots just won an ICE Advertising Award. All 4 spots can be found at the above link, but I will include one here (just to whet your appetite to give some traffic to the site):