Pen-ek Ratanaruang's "Ploy" has a dreamlike feel for much of its running time. It gives off a feeling of constant sleepwalking as its three main characters go through what may or may not be dream states. By the end, the viewer may feel somewhat like the characters did in the movie... 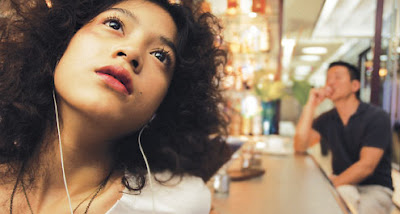 After flying straight from The United States for a funeral in Thailand, exhausted married couple Wit and Dang go to their hotel to attempt to shake off the jet lag. Dang goes to bed, but Wit goes down to the hotel bar and ends up meeting a young girl named Ploy (who the bartender claims is stoned). Since she plans to wait there all night for her mother to pick her up in the morning, Wit invites her back to the hotel room where she can rest. As one might expect, his wife Dang is not overly fond of the idea, but allows it anyway.

As all three characters cope with their altered mind states (drugs, alcohol, sleep deprivation) and seem to drift in and out of sleep, we get glimpses of what are apparently parts of their dreams. The bartender from earlier and a hotel maid show up in a parallel storyline which may or may not be part of the dream fantasies of the young girl. Wit and Dang's arguments and the long extent tension between them seems to also spill over to their dreams. Dang eventually retreats to the hotel lobby (smuggling booze into her drink) and this leads to an unexpected turn of events as she meets an admirer there. She was once an actress in Thailand before moving to the States and her desire for recognition of any kind (given her distant husband), as well as an apparent drinking problem, makes her vulnerable.

At the end of the film one is left wondering what may or may not have actually occurred. Two of the audience members next to me were convinced about one specific plot point having happened because of what they were sure they saw on one of the characters in one of the final scenes. I didn't think it was that clear cut though. I felt Ratanaruang was deliberately allowing the viewer to decide what actually happened during the time since they landed in Thailand.

The whole look of the movie is soft focus and fairly drab, so there is no specific visual clues to indicate when you are watching a dream or not. It's a somewhat frustrating exercise in movie viewing and yet I thought it was also an interesting experiment. We're given a number of building blocks with which to make a story - we choose those we like or feel make sense and the others are relegated to the dream factory.

At least that's how I choose to look at it. 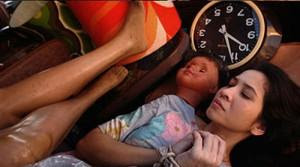 Nice write-up, Bob. I really wanted to like this one, since I was ready to slash my wrists after Invisible Waves; but, looks like I've lost my interest in Pen-Ek.

Thanks Michael...I haven't yet seen "Invisible Waves" and certainly don't feel an overwhelming urge to do so (you aren't the only one to comment about it negatively).

I liked "Ploy", but it certainly was frustrating at times...