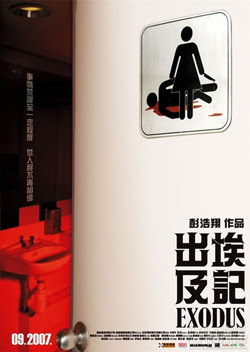 The opening shot of the Hong Kong set "The Exodus" is one long backwards tracking shot - from a zoom in of just the eyes in a portrait of Queen Elizabeth II to the end of a long hallway where the beating of a man in police custody is occurring. That photo of the Queen serves a dual purpose - to set the time period of that opening shot (at least a decade previous to present day 2007) as well as to get across the concept of the ruling female with a watchful eye.

The beating (by police wearing nothing more than bathing suits, flippers and masks/snorkels) is witnessed by Jim Yip - a young cop still not quite in tune with the workings of the police establishment. When we next meet him as a middle age Sergeant, he is somewhat detached from the rest of his unit, his wife and his life. One evening he takes the statement of a Peeping Tom found in a ladies' washroom. The perp claims innocence as he was just trying to get more information on a female conspiracy to slowly kill all the men in the world. Yip, of course, doesn't believe him until he is called back in to retake the statement - the paperwork has gone missing and suddenly the accused is confessing to being a pervert.

It's a somewhat silly premise, but it's handled as a straight up mystery throughout most of the film. And it mostly works as Yip begins to dig deeper and comes to believe in the conspiracy and even wonders if his wife is in league with the plan. The only real false step is a confrontation inside the police station between Yip and a female superior. It's one of those scenes where an authority figure overplays their power with threats when there wasn't any good reason to do so - except that is to further convince the recipient that something is indeed going on...But otherwise the plot moves slowly but surely along without becoming obvious or cringeworthy. 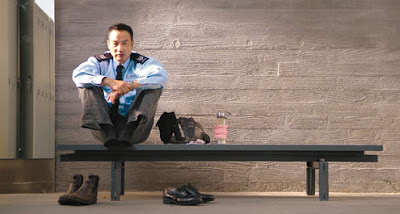 This is helped by some great cinematography. Blues and yellows seem to dominate much of the palette of Yip's life - especially as he becomes involved with the wife of the Peeping Tom. When red enters the film in key spots it signals power and character transitions. The filmmakers have also found some truly beautiful architecture around which to place the story - several members of the audience in the Q&A couldn't believe that it was actually filmed in Hong Kong.

"The Exodus" has some fine subtle performances by the cast, a good set of characters and a story that shifts between mystery and dark humour. It may very well have been more entertaining if the premise was played for more laughs, but it's still a worthy and well constructed film.
Posted by Bob Turnbull at 21:17