My first experience with legendary Hungarian director Bela Tarr was watching his 2000 film "Werckmeister Harmonies" just a month or so ago. It's a truly astonishing film. The various themes of harmony and chaos running through it are enhanced by the brillant cinematography (beautiful black and white photography throughout very long takes). This all combined to create a lasting impression that I'll want to revisit (oh, and the music too!). 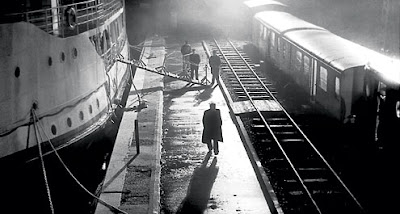 His follow-up film "The Man From London" has taken 7 years to get made and though much of it is exactly what I was hoping for (more beautiful photography via long wandering camera shots), it just didn't reasonate much with me. I fully expect that part of that is due to my expectations being higher than they should've been, but I walked out of the film disappointed. And a bit sleepy too.

I found that this time around, the long slow takes were a detriment to the telling of a much more straightforward tale (a novel by Georges Simenon is the basis for the story)...It's like the slowest noir film you ever saw. Since I didn't feel there was as much to ruminate upon during those lengthy shots, it simply felt somewhat dull. Certainly not bad mind you - there's enough visually to keep you interested and there are definitely moments and scenes that work well. A small scene with two elderly gentlemen dancing (one with a cue ball balanced on his nose, the other holding a chair over the other's head) is actually quite charming. The opening shot, which apparently runs around 12 minutes, is really a marvel to behold.

But overall I never became engaged with the characters or the story (the fact that I was keeping track of how many different shots there were in the movie is probably a sign of this - I counted 29 different shots or an average of over 4 1/2 minutes per take). As the plot wound down, I found I didn't really care that much what happened to anyone in the film. And the music, though "haunting" in many spots, just didn't capture the wonderment of his previous film. I suppose that's not what Tarr was trying to do, but I couldn't help but be disappointed by that.

Having said all of that, I have talked to a few people that liked it a great deal and they have, at the very least, made me curious about seeing it again. Many films have grown on me upon a second viewing and the fact that I'm willing to consider it is a decent sign. However, I'll make sure I have that intravenous caffeine drip set up first... 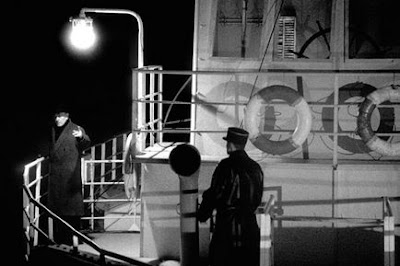 I've always had a great affinity to slow films with really long takes-the works of Kiarostami, Wong Kar-Wai etc. 'The Man from London' sounds very promising from what I see in the pictures. I think the true feel of film noir is really captured only in black and white. Will add this to my must-watch list.

I expect you would like it gautum. I'm still disappointed that I didn't like it more. I love noir and can forgive plot/story issues for images that stay with me. But this just didn't connect with me.

I do hope to revisit it one day though.

You MUST revisit it, I tell you, you simply MUST. Otherwise, you will have to live with the weight of being so terribly, terribly WRONG. Heh.

Michael, I already live with that weight constantly on so many other fronts. B-)

But yeah, I'm still curious to see it again, so I'm not a total write off yet...