Can a great 15 minute sequence make an entire film?

That's what I was asking myself after leaving the Friday night screening of Mark Heller's "The Passage" - the story of two young men whose trip to Morocco takes an unexpected turn once a beautiful local woman enters the picture.

American Luke (Stephen Dorff) and Aussie Adam (Neil Jackson, also the screenwriter) are good friends who have come to Morocco as part of a getaway from a tragedy back home. They have different approaches to the trip - Luke wants to see the country, take pictures and soak up the culture while Adam is the party type. One day, while off persuing their own individual plans, Luke meets the rather stunning Zahara. 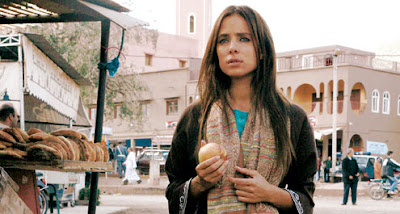 She translates for him the performance of a storyteller on the street and they get to talking. Over tea, she offers to be a guide for him and suggests a particular remote spot that would require an overnight stay. With encouragement from Adam as well as Zahara's sparkling eyes, Luke heads off with her. And though there is some question as to Zahara's intentions and a few indications that maybe not is all what it seems, by the time they get to their overnight accommodations (where Luke discovers "the passage"), you aren't so much bored, but just wondering what the point is...The movie up until then isn't bad, but the combination of Dorff's rather dull performance, the oafish Adam and a very slow moving story just seem to lie there.

The centre of the movie though is the 12-15 minute sequence in the labyrinth of dark hallways that Luke has found. Luke decides to investigate and brings with him a number of candles and his digital camera. This entire portion of the movie is only lit with those items (as the passage is in total darkness) and becomes increasingly tense. In particular when it's just the camera lighting the surroundings - the flash goes off and we see what the camera was pointed at, then we see Luke lit up by the viewscreen, then another flash and the point of view of the camera and back to Luke. The tension builds quite well throughout this whole section of the film and Heller has done a remarkable job in putting it together. If it doesn't quite finish with the climactic bang you are looking for, it provides some solid moments of anticipation and suspense.

Adam re-enters the picture at this point and though there is still a residue of suspense and questions about what exactly has been happening (is Zahara truly the helpful guide she appears to be? what was it that Luke found in those boxes in the passage?), you know you're passed the showpiece of the film. It ends kind of where you think it will, with a small additional scene at the end to possibly appease the tourism board of Morocco, and you leave the theatre with that one sequence in mind.

So I'm happy I saw that 15 minutes, but the rest of the film is quickly slipping away...
Posted by Bob Turnbull at 11:19