Though the French thriller "Chrysalis" is my last TIFF review, it was one of the earlier films I saw this year. Why the long wait? As many people have said, it's pretty easy writing about something you love or hate, but much harder when it's something about which you are totally ambivalent...So, I've been putting it off.

I'll start with a checklist:
But apart from not being overly original, there aren't really any badly done elements in the movie. The acting is fine for the genre. The set designs and almost B/W feeling of the film are quite well executed. And the fights are OK. But it's just not very exciting or intriguing or interesting...

Maybe a glimpse of part of a fight scene will get across more than I can properly express:

Is it me? Or after watching that did you think "Gee, I wonder what I should have for dinner...?"

Hey, I'm all for a colourless bleak future as much as the next guy, but the story here - which involves loss of identity and a person's own view of themselves - just failed to really capture my attention. I'd have to say that part of that is a fault in the telling of the story. One example is a scene in which one of the film's big mysteries is revealed in an almost casual way.

I wouldn't tell anyone not to go see this film. But I wouldn't recommend it either. 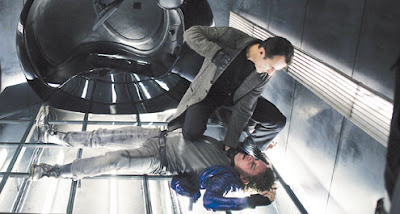