Over the summer I caught up with Julio Medem's "Lovers Of The Arctic Circle" after hearing a great deal of praise. It's a terrific film about coincidence, chance meetings and destiny. It never oversteps its boundaries and turns what could've been an over-convoluted mess into a lovely romantic story. I quickly caught up with another of his features "Sex And Lucia" which I remember getting some raves when it was released a number of years ago. It too dealt with a similar theme and though it didn't reach the heights of its sister film, it was still an excellent experience. And sexy as hell.

So you can imagine that I was excited when I saw his latest film "Chaotic Ana" was to be at TIFF this year. I had great expectations when I read that it was similarly tackling circular storylines and repeated experiences (its lead character Ana - played by Manuela Velles - begins having flashbacks of her past lives; all of whom died violently at the age of 22). 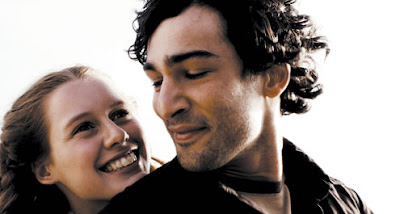 I rarely get angry at a movie (at least fictional ones). If it's art, it's all interpretation; if it's commerce, well, we already know the drill there. But by the end of the 2 hours spent inside Ryerson Theatre, I had reached my limit. I almost walked out (which I never do), but gritted my teeth hoping for a possible final saving grace. Nothing showed up, so I bailed the second the credits rolled.

I guess I should've been somewhat curious to hear Medem try to explain himself in the after film Q&A, but I just couldn't abide sitting there any longer (I'll explain in a bit). Looking back, I suppose I should've...Even if I didn't like the film (huge understatement), I could've potentially learned a different way of looking at it or perhaps better understood the intent. Since I didn't stay, I can continue to hate the damn thing.

It starts reasonably well...Young and beautiful Ana is an artist who lives with her father in a cave. She paints and seems to live life day by day. Her art captures the attention of the wealthy Justine (played by Charlotte Rampling) - a patron of the arts who offers to bring her to Madrid to live in a house with other artists to study and concentrate on her work. Once there she begins having episodes and visions. These end up being flashbacks to the previous lives she has led and they are brought out by a young hypnotist.

Though there's the kernel of an interesting story here and I liked Medem's idea of slowly counting down from ten (like a hypnotist would) over the length of the film, everything goes horribly wrong. As the hypnosis sessions uncover more lives, Ana's character becomes less and less interesting. Velles is reduced to looking all crazy like when she goes into the trances or relives a past life. Medem even uses odd close-ups of Ana at these points which I can only assume was done to give an impression of her slipping into her other life (all it did was make me think "3-D House of Ana!"). It gets tiring and dull and just a little embarrassing...And then it gets bad.

Spoilers follow. This can only improve the experience if you choose to watch this film.

After she stows away on her friend's father's boat to sail across the Atlantic (don't ask), she ends up in New York City - by way of the desert (I said don't ask). All this (and a reconnection with a former lover who explains why he left her - during one of her hynoptic trances he realizes that one of her past lives was his mother) just to set up an encounter with one of the evil, an oh-so-completely-unsubtle-evil, U.S. government men who is responsible for the Iraq War.

To keep it short (and I do apologize for what I'm about to write here), she flirts with him, gets him to invite her back to his room, comes on to him and as they are about to have sex...she shits on his face. Now could Medem really have made his political commentary any more juvenile, lame and uninteresting than that? Regardless of your political position, that's a sign that he simply has nothing to contribute. Even more disturbing for me was that there were some members of the audience who laughed and applauded at that point. I was embarrassed.

And I'm done talking about it. Perhaps Medem needs his own patron of the arts to get him back to focusing on what he does best. That or he should really snap out of that trance he's in.
Posted by Bob Turnbull at 23:25