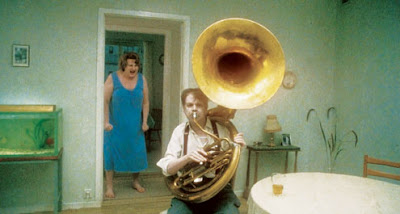 There's a moment in this film...It occurs just after a lengthy joyous dream a young woman has of marrying the guitarist she has recently met in a bar. The dream ends and the joy is brought back to the reality that the woman will not be making this far fetched dream come true. We cut to a woman casually sitting in a bathtub and she begins to sing. And she's singing this song we had heard not 10 minutes previously at a funeral. But now, there's this haunting beauty to it...

And at that moment I almost burst into tears.

I'm not quite sure why actually. Likely it was mostly due to the music (I'm a big fan of Scandinavian folk music believe it or not) which was simply gorgeous. And it wasn't because I was emotionally torn up by any specific event in the film. But after the stark images that director Roy Andersson had supplied us with so far, the nightmares recounted and the dreams dashed, the happiness that seemed so far out of reach of the characters - this simple song seemed to capture everything that these people were missing.

Or maybe I was just really tired.

Whatever the reason, it's one of the most incredible moments I've had viewing a film this year.

Be pleased then, you the living, in your delightfully warmed bed, before Lethe’s ice-cold wave will lick your escaping foot.

Through the many half-dead looking characters and short static washed out scenes, that above quote from the beginning of the film seems to say "find enjoyment in life where you can and make the most of it - because time is ticking...". The people in this film are just completely unable to do that. And yet the film is still very funny - much more so than 2000's "Songs From The Second Floor" (though it retains much of that film's style).

Everything about this film - it's deadpan humour, the perfectly composed shots, the music, the strangely sympathetic characters - made me want to stay right in my seat and watch it all over again immediately. But I couldn't. Nor will I be able to attend its second showing at TIFF. So now I'm faced with the likelihood of waiting for a long off DVD release. I want to cry out and let everyone know how unfair this is! I feel I should demand that it be released in theatres across the country!

Or perhaps, I will be pleased at my good luck at having had the privilege to see it in the first place.

These images alone make me want to see the film. Your review helps, too!

Wow Bob, you seem really moved by this film. I remember going through the same thing when watching Kusturica's 'Arizona Dream' on cable TV. I had missed the first few minutes and I wanted to catch the re-run the following afternoon but I had to goto class! I was never able find a DVD or any other trace of that film. I just hope I get to see it again someday.

James, it's a beautiful film to look at...Many people comment on the washed out colours, etc. but Andersson's compositions are just superb and the restricted colour palette is used effectively.

Gautam, thanks for the comment...It's funny how you just never know when something is going to hit you emotionally. A big part was the setup before the song - having just come off the beautiful dream sequence.

I've only seen Kusturica's "Underground" which I liked, but felt was unfocused. I'll certainly keep an eye out for "Arizona Dream" though (have you checked for DVDs in other regions?).

I did do an extensive DVD search a few months ago and managed to find a VHS listing on amazon uk I think- but I'd rather wait for the DVD. Hopefully Criterion or Artificial Eye might take it up someday.

Bob- I'm hosting a Double Bill blogathon at my blog in October. Would you be interested in joining in?

Put me down for a 'Yes' on the Double Bill blog-a-thon gautam. I already had it up on my sidebar as an upcoming blog-a-thon (I can't remember which site I saw it listed on).

I haven't a clue what to write about, but I always love trying...

Bob: Just as my comments on The Man From London has given you thought to reconsider, yours on You, the Living have done the same for me. It was such a pleasure to meet you in Toronto at The Ethiopian House.

Whereas exhaustion may have induced rapture for you, it caused me to walk out on this film. Only one of two in which I did that. I really hope I have an opportunity to watch this when I'm better prepared.

Thank you Michael...It was indeed a pleasure for me as well. I love the passion you bring to film discussion.

I certainly liked Man From London more than you liked You, The Living. I'd love to hear your thoughts if you happen to squeeze a viewing in at some point. I'll be sure to share mine about Man From London if I get to see it again (hopefully Cinematheque might give it a screening).

I somehow missed this post the first time around. Probably because I saw a name I didn't recognize in the rss feed and thought, meh, whatever - I'm shallow that way. But this is yet another proof that I shouldn't be.

I wasn't quite as powerfully affected as you were, but I did enjoy this film immensely. It should feel disjointed and episodic, really, due to its structure, but because of the emotional resonances and the consistent style it feels more like 1 immutable whole than a lot of more 'traditional' narrative movies often do.

On another note, I'm going to see The Man From London at the festival. Since I've heard very different responses to it, I'm very curious what I'll think.

Thanks for the comment Hedwig...Yeah, I certainly don't expect everyone to have the reaction I did - it's strange how some films just hit you like a ton of bricks.

"The Man From London" is definitely something I want to see again. There's some stunning gorgeous images in the film, but I didn't feel the long takes really added much and the film dragged for me. I respect the views of a number of people who love the film though, so I'm curious how another viewing may stack up (hopefully on the big screen, but that might be tough).