A most appropriate title for 33 separate short works based around what each filmmaker feels about cinema as evoked by movie theatres. It also applies to each viewer who will walk away with their own favourites and thoughts as to which were total misfires. The resulting collection of short pieces was connected together as a single feature film in order to celebrate the 60th anniversary of the Cannes Film Festival where it premiered last May.

Toronto viewers at the Saturday morning screening were given an extra special bonus over those at Cannes - we got to see 34 short films. The David Lynch film that wasn't ready back in May was assembled and tacked on to the beginning of the film. Had we not been told this (and since it was shown with no additional titles), I expect that most still would have figured out it was a Lynch film. It was just so...Lynchian. 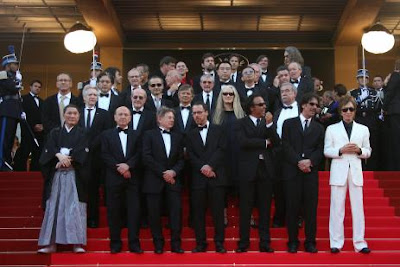 That's part of the fun of these omnibus type films - playing guess the director. I managed to guess 4 or 5 right away simply on style and another couple just because of location. Takeshi Kitano, Wong Kar-Wai and Zhang Yimou were the easiest for me and the Coens were also pretty obvious once the dialog started to flow. Each film ends with director credits, so you aren't left hanging.

Of course, most of the films use a movie theatre as the central location, but approaches are radically different from there on. Some are nostalgic, some bittersweet, some cynical, some funny, some dramatic and some downright confounding (Jane Campion, what the hell were you thinking?). What does show through most is an absolute love of film though...And apparently Robert Bresson is a big favourite as no less than three separate pieces made reference to his work either by sound or film clip.

You can't really discuss this kind of movie without resorting to playing favourites. So here's some of mine:

Lars Von Trier's "Occupations" - This one got the biggest laughs of the day...Most would agree that Lars was in his rights to, um, silence his fellow moviegoer:

Nanni Moretti's "Diary Of A Spectator" - Funny and warm recollections of Moretti as he bounces from one cinema to another.

Ken Loach's "Happy Ending" - The final short of the film ends on a smile as a father and his son try to figure out what to see at the local multiplex.

Walter Salles' "8944 km From Cannes" - This short received probably the best reaction of the day...The entire piece is done outside a movie house (showing "The 400 Blows") where 2 Brazilian singers are bantering back and forth in song about Cannes. While one sings, the other plays tambourine and they are funny, crude, extraordinarily talented and obviously having a great time. At the end of their song (but before the piece ended) there was a spontaneous and rather thunderous round of applause from the audience. The version below only has French subtitles, but you can't mistake the exuberance.