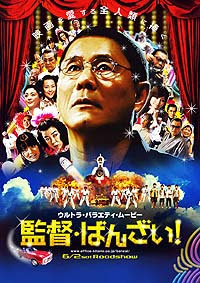 Let me be honest right up front...I was really tired during the Saturday night 9:00PM screening of Takeshi Kitano's latest. So about half an hour in, right around the point where the movie goes full throttle into absurdist comedy, I began to occasionally nod off...And yet, I still enjoyed it a great deal and don't think I would've had a different reaction had I been fully awake. It wasn't exactly what you would call a straight narrative, so even if I missed something during one of my minor head bobs, I can't imagine I could've been any more confused than anyone else in the audience.

Of course, total comprehension of the surreal events in the last hour of the film is hardly the point. "Glory To The Filmmaker!" is the second installment in what is apparently a trilogy of Kitano's deconstruction of cinema. His previous film "Takeshis'" had Kitano's alter ego Beat Takeshi (the actor/comedian side of him) meeting his doppelganger and then intertwining their lives in dreamlike scenes referencing his previous films. His latest work takes it a step further - at the beginning of the film, Kitano's new doppelganger (now a lifeless dummy) is sent to the doctor in place of himself. The replacement goes through a battery of medical tests and we see catscan and other medical reports (each having patient names of classic Japanese directors - Kurosawa, Ozu, Fukasaku, Imamura) before the doctor finally says "I wish he would just come in himself". 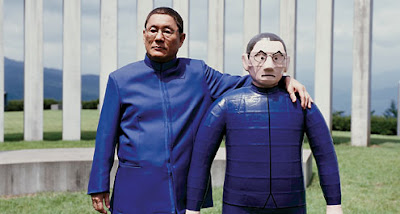 This is followed by a series of false starts at a new Kitano film. A narrator describes a possible genre for his next film and then we see a few minutes of what it might look like. The narrator explains what went wrong and we move to another clip. This section is quite amusing and the audience I was with ate it up. From Ozu to rom-com to samurai, Kitano's team just can't seem to find something that works. And then it becomes sketch comedy - as if put together by that guy with short term memory loss in "Memento".

I guess I'm predisposed to like Kitano's style and sense of humour, so I'm not sure I can be fully objective (nor do I really want to be). It's not pretentious, but it certainly is self-indulgent. It's Kitano working out what film means to him and how it can be used visually and comedically in different ways than he has used it before. It's kind of a glimpse into the thought process of an artist searching for inspiration - while allowing insanity to prevail all around him.

That may not sound exciting or even interesting for many people. So be it. But what if I mentioned the big red balloon male appendages? Would that help?