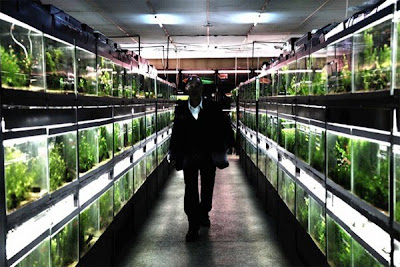 Fearless. Absolutely fearless filmmaking. Sion Sono takes no quarter, doesn't deal with compromises and doesn't hold anything back. He goes by feeling, sets no boundaries and won't second guess himself. His latest film "Cold Fish" (along with his previous 4 hour epic "Love Exposure") feels like an instinctive creation - there's an energy to it that feels like he edited it live in one fell swoop. It picks you up and whips you through the entirety of its 144 minute ride. Even during some of the longer takes and slower sections in this telling of the true story of Japan's most notorious murderer, you can be left breathless.

Early in 2009, a dynamic and outgoing owner of a large tropical fish store was found to be moonlighting as a serial killer - and a very successful one at that since the film states he committed the act 58 times. If that sounds like it might be a slightly exaggerated number, well, it's entirely possible. Apparently this true tale is based on the accounts and book by the killer himself (who now awaits trial in Japan). Since there was never any evidence or physical remains to be found (the bodies were burned or fed to fish in a river), there's really no way to verify his story. If only a small percentage of what this version of the story shows actually happened, it's still exceedingly hard to believe. You simply don't want this to have been possible. 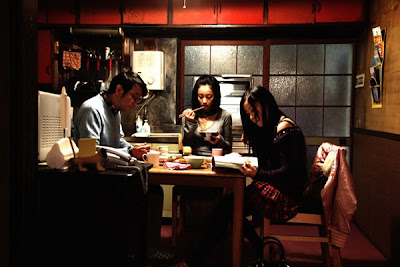 The movie begins with Shamoto (another tropical fish store owner) and his dysfunctional family. He's meek, his daughter hates both him and his second wife, his sex life is non-existent and his own store is quite mediocre. He meets Murata, the owner of a huge glitzy fish outlet called Amazon Gold, and is dazzled by his forceful personality, sensual wife and bright red Ferrari. Before he even realizes it, Shamoto has been pulled into a business deal and has also agreed to turn his delinquent daughter over to Murata and his wife Aiko (she is to live in their dorm and work with the other young girls who provide customer service at the store). Just as suddenly, he becomes an accessory to murder when Murata poisons his business partner after they've completed a financial transaction. Shamoto's unwillingness to confront people is exploited by Murata and his plan is to groom Shamoto to continue his "work" - not just the killings, but the body disposals too. Murata equates them to making someone invisible, but the process is far, far messier than you might think. One of Murata's talents is to be able to read people right away and know how to dominate them. He does this in different ways with the rest of Shamoto's family as well until he firmly has Shamoto under his control - the meek shopkeeper is now in a no win situation that forces him to be a party to further killings and disposals.

Where the story goes from there is best left as a surprise. Even when you know where it's going, though, you still can't quite believe it got there. The manner of the telling is, at times, draining and quite astonishing. Music is a huge part of Sono's toolset as he will use simple repetitious musical melodies and phrases to slowly gradually build up tension in a scene and then restart the same music again a bit later to further ratchet things up. In "Love Exposure", Ravel's Bolero kept resurfacing over and over again, while in this case it's the old ditty "Frere Jacques" (known in English as "Brother John"). It's amazingly effective whenever that theme returns and combined with a natural sense of rhythm to the editing and several scenes with pounding drums as the soundtrack, manages to keep you in an almost constant state of preparedness for the events that unfold. Not that you can really be completely prepared for what happens...The gore is substantial, but doesn't come flying at you - it's almost funny in how it's simply just there. It's an impressive feat that the film manages to disturb its audience while also getting them to laugh and giggle in fits - in particular during a scene where the husband and wife enjoy their methodical method of completely dismantling a human body (joking at one point that now would be a good time to circumcise the victim).

As wonderfully played by character actor Denden, Murata is over-powering in just about every scene. He seems unstoppable, unflappable, invincible and completely insane. Asuka Kurosawa (from Shinya Tsukamoto's "A Snake Of June") is equally convincing in her role as Aiko, a sexual beast purely in it for her own pleasure and love of power. It's hard to sit still during the film - whether it's a disturbing scene turned on its ear by being made "funny" or an improbable seduction scene between Aiko and one of the young girls outside the doors from a tense conversation between Murata and the dead businessman's brother - as you can't help but feel pulled constantly in several different directions. If perhaps not as overall entertaining every moment as "Love Exposure", the entire film is still a wonder. Have no fear. 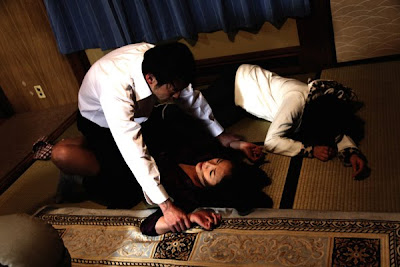 Sorry I couldn't find an email for you so posting here. Just passing along some interesting Bela Lugosi information I hope you'll consider to pass along in your network. Announcing the launch event for BELA LUGOSI'S TALES FROM THE GRAVE horror anthology comic book series from MONSTERVERSE! The Lugosi horror comic will be out in October in time for Halloween! Here are some links below. We're bringing back the most popular horror icon and vampire in the world to comics and far beyond the grave.

AN EVENING WITH BELA LUGOSI at the AMERICAN CINEMATHEQUE.

The Egyptian Theater in Hollywood.

A special preview trailer of the graphic novel, FLESH AND BLOOD, by Robert Tinnell and Neil Vokes. (Halloween 2011)

TRAILERS FROM HELL commentaries on Lugosi by Garris and Dante.
Poster design by artist Charlie Largent of the NEW YORK TIMES and WALL STREET JOURNAL.

See the stunning poster for the event at:
http://twitpic.com/2mxwhx

YouTube TRAILER of BELA LUGOSI'S TALES FROM THE GRAVE. See pages from all the stories and other art! http://monsterverse.com/

Bob, it's Aiko, not Aoki. BTW, love your reviews, please keep it up.

Thanks for the correction! I've fixed it...I must've transposed the letters at some point.

I greatly appreciate the kind words as well.

MANASYt, it was my 2nd fave of last year (since I saw it at TIFF 2010) - "The Illusionist" just bumped it out (not easy to compare those 2 films though). It really is kinda breathtaking...