Though filled with their typical beautiful animation and penchant for including a myriad of little touches and background jokes, Pixar's 2011 summer entry "Cars 2" is easily their least significant piece of work. It's not as horrible as many people expected (and even seemed to want it to be), but it doesn't feel like the same effort has gone into the story and characters as even their lesser films. There's a great deal of creativity here (in the details - particularly when they take their car society to other parts of the world), but for the most part it's flash and brash and gets bogged down with chase after chase after chase. The story isn't propelled by the characters this time around - and everything suffers as a result. There's some fun to be had, but not really a great deal of humour and not a speck of warmth.

The majority of the film is based around a conspiracy to ensure alternative fuel sources are ridiculed, oil and gas remain as the primary source of energy and that cars that were regarded as "lemons" (Gremlins, Yugos, etc.) get more respect. Through a World Grand Prix sponsored by the discoverer of a brand new clean source of fuel, Lightning McQueen and, primarily, his rusty sidekick Tow Mater become wrapped up in spy hijinks to prove that the conspiracy exists. This all provides the backdrop and impetus for a multitude of car chases topped by a barrage of weaponry. As mentioned, Larry The Cable Guy's voice takes centre stage when Tow Mater accidentally and unwittingly becomes involved in the spy efforts to bust open the criminal activities. As two agents try to fit the pieces together (voiced by Michael Caine and Emily Mortimer), they believe Mater to be their American contact. While they bounce through different corners of the globe meeting up with the 3 races of the World Grand Prix (in Japan, Italy and England), the spies close in on the cartel of dud cars who plan to control the world's gas supply and embarrass the top race cars while they're at it. Mater gets the lion's share of the action while Lightning McQueen simply battles an Italian F1 car and considers what his friendship to Mater really means to him. The rest of the "Gang" from Radiator Springs are shuffled to the sidelines and are only occasionally glimpsed throughout the movie.

Therefore, your mileage will depend heavily on how much Larry The Cable Guy you can take in one sitting (when things aren't blowing up that is). Speaking as someone who actually enjoyed the first film and has no major issues with Larry as a voice actor or even as a stand-up comedian, Mater wears thin as a compelling character pretty quickly. The plot gets moved forward by Mater continually doing something stupid or naive and even though he always shows he has a good heart (or should I say pistons?), there's little arc available for any of these characters. Short of a minor fight between McQueen and Mater, there's little to resolve for the denizens of Radiator Springs and so it's all up to the machinations of the spy plot to keep your interest. Each chase is clearly designed with great care and there's always something inventive going on, but there's simply nothing to latch onto except for spotting the details (the references to previous movies, character names, the kaleidoscope of colours, etc.). I smiled and chuckled occasionally, but not once did I laugh out loud. And, more importantly, neither did the two 10 year-olds I brought to the screening. Even after the film, neither of them spoke a single word about it - when asked, they said they liked it but did not proffer up any examples of why or relive any of the moments.

I can't quite get to the point of of accusing Pixar and Disney of being completely cynical by making an hour and fifty minute long toy commercial, but it probably wouldn't take a great deal or persuading since there is a definite lack of effort to build something original this time around. Lasseter obviously likes these creations and still has his boyish sense of fun, but he's lost (at least this time out) his adult radar for character-based humour that pulls you in and provides the deeper pleasure. Or perhaps just blinded by the shiny lure of residuals from the sales of little Tow Maters. Ka-ching! 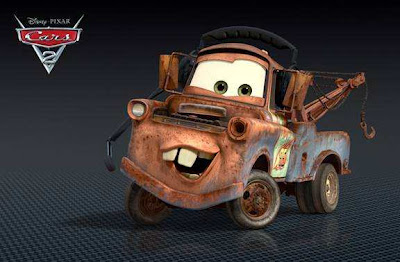