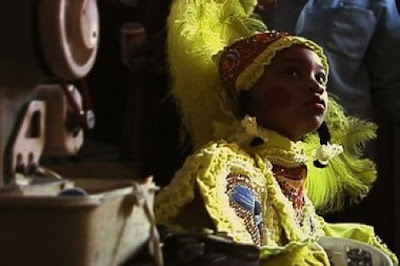 Bury The Hatchet (2011 - Aaron Walker) - I've been to New Orleans twice (though not since Katrina) and love their approach towards ensuring their mix of cultures is less of a bland "melting pot" and more a tasty gumbo. One such example is the Indian Big Chief during Mardi Gras - a tribute to the Native Americans who helped runaway slaves. Over several years, Walker's film follows several tribe leaders through their annual preparations for the big day (mostly via the creation and donning of their wondrous costumes of brilliant coloured feathers and sparkles), their tussles with local police, other leaders and tribes and, of course, Katrina. Even with an Interstate running right over their old parade route, the chiefs maintain their traditions and ensure they get passed down through to the next generation. As the chiefs strut their stuff in these huge costumes, you can't help but be reminded of a peacock proudly displaying its tail. They may seem boastful as they talk of their costume designing, sewing, singing and songwriting skills, but the pride comes from a deep respect of their heritage. If you've ever wondered what a flagboy is, they will be glad to tell you and provide even further education on their living breathing culture. And the music is fantastic. 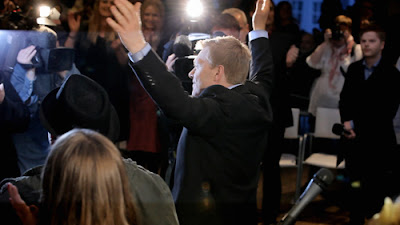 Gnarr (2010 - Gaukur Ulfarsson) - What happens when a comedian starts up his own political party and enters them into an election? In North America, it typically garners some good headlines, a fistful of jokes and a few well-targeted potshots at current policies and leaders. But in Iceland, well, it ends up being a different story...As Jon Gnarr and his "Best Party" (friends and all manner of artists - including a former member of The Sugarcubes) mount their campaign in the mayoral race in Reykjavik they actually start making inroads and begin to gather support. They never waiver from their stated goals (including making sure the zoo gets a polar bear) and it seems to be an effective strategy against the overly serious "professional" politicians. As much fun as some of the film ends up being, it never really explores why the polls start to favour The Best Party nor does it look at the downside of running this kind of race. It's a bit of a frustrating film in that you are continually waiting for it to start, to get at the heart of something...anything. Entertaining to a point - or rather, entertaining without a point. 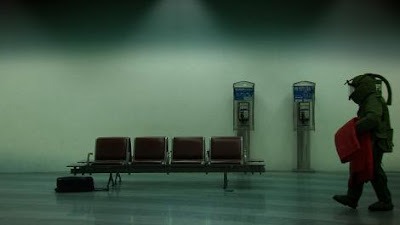 The Castle (2011 - Massimo D'Anolfi, Martina Parenti) - A completely observational film that looks behind the scenes at Milan's International Airport, "The Castle" may occasionally be slow moving, but it's rarely boring. Partially that's due to some lovely cinematography and interesting choices of shots and framing and partially it's because you get to be a fly on the wall as numerous interesting items are examined before being let into the country. Of most interest, though, are the human beings trying to get into the country. The drug smugglers, the refugees and the simple tourists all need to pass through what seems to be a phalanx of experienced customs agents and their probing questions. It's apparent that sometimes people get stuck in the airport as well - as evidenced by the one old lady that appears to cook and clean in the public washroom. Being strictly observational, the film doens't have any narration to lead you from one situation to another or explain what eventually happens to several of these people. It's not really required though - the film easily makes its own statements about why many people take chances to get to another country other than their homeland and the strange and sad stories that lie behind them.
Posted by Bob Turnbull at 23:02

Dude, the old lady ruined that movie for me

Heh, I guess they did spend a wee bit of time with her (did I mention the film was a bit slow?). But I still kinda found it fascinating that she could go about these daily chores in a place like that...