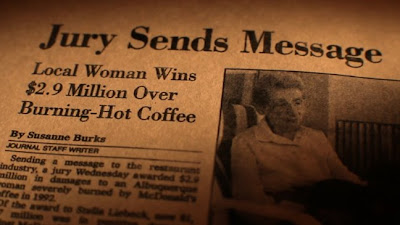 Hot Coffee (2011 - Susan Saladoff) - Remember that "crazy" old lady that sued McDonald's because the hot coffee she spilled in her own lap was too hot? What was the first thing you thought when you heard that she won? Before you answer, did you ever see the actual injuries she sustained? Or really hear the full story? Saladoff's film covers not only the details of this case and horrific damage caused to Stella Liebeck (I've rarely seen so many people turn away from the screen in unison as when they showed photos of her burned and charred flesh), but also shows 3 other stories where the real details of the cases may have been obscured by those who didn't want them coming to light. What resulted from some of these poorly covered cases was an easy time of convincing the American public that the time was right for "Tort Reform" - after all, was it fair that these corporations were getting robbed in court by frivolour cases that were wasting tax dollars? If Saladoff's film leans perhaps a bit heavily to one side of the general argument, it makes some extraordinarily effective points about how big business used (and does to this day) its heft to ensure that it controls the court of public opinion and has it cater to their own whims. 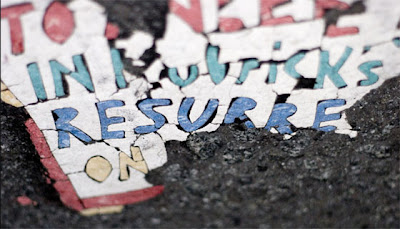 Resurrect Dead: The Mystery Of The Toynbee Tiles (2011 - Jon Foy) - A mystery akin to Fincher's "Zodiac" in the way its twists and turns flow down many different threads and in how its main detective becomes completely immersed and obsessive about his quest, Jon Foy's first film tracks his friend's investigation into the Toynbee Tiles - a set of tiles found throughout the Eastern U.S. (and even South America) spelling out cryptic messages referring to Kubrick's 2001, the dead being resurrected and other seemingly disparate things. As they search via the Internet and follow up leads here, there and everywhere, it's the search that becomes fascinating and not really the mystery itself. The various dead ends and odd theories that arise are far more interesting and fortunately Foy recognizes this and gives each its due. Unlike Zodiac's protagonist, though, there's a point where the sleuths looking for the tiles origins are able to stop and let go - and it's a wonderful and very human moment. 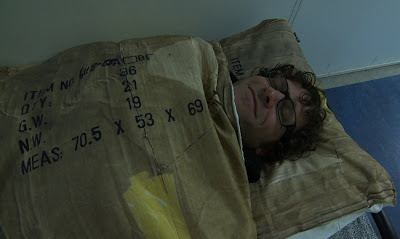 Recessionize For Fun And Profit! (2010 - Jamie Kastner) - The secondary title of Kastner's film states "15 Simple Steps!" and refers to the 15 sections into which his 60 minute Michael Moore-esque jaunt of a doc is broken. And "broken" is a pretty apt description. It's supposed to be a tongue-in-cheek look at the various ways people retool their businesses during tough times to continue to make money (from German hookers offering "green" discounts to classes teaching young children the joys of capitalism), but it comes across as condescending, smug and quite lacking in anything to say. At least it's not dull, though, since it does feature some occasionally interesting people and ideas (some good and some so very not good) and switches gears and stories every 3 to 4 minutes. Unfortunately, Kastner inserts himself into the movie and though he tries, he doesn't even have Moore's sense of humour (which admittedly isn't exactly finely tuned). I've tired of Moore by this point and find him just as bad as the far Right fear-mongers he targets, but at least I get his points (whether I agree or not). Kastner just comes across as thinking he is better than essentially everyone else in the film without showing any just cause.
Posted by Bob Turnbull at 21:17