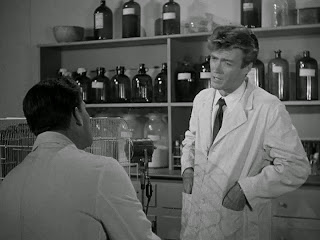 Clint in an early (and I think even first) role in Revenge Of The Creature (1955). It's only a about 20 seconds long and is a throwaway gag that Clint's lab technician has assumed that a cat has devoured one of four mice in a cage (thus proving that there's a built in instinct to attack since the cat had been fed recently) - until he finds it in his coat pocket. Goofy, but it ties in somewhat to the rest of the film.

And that is some damn good hair.
Posted by Bob Turnbull at 12:22