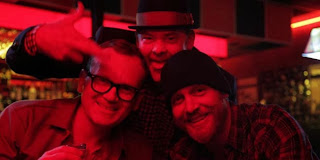 A near perfect title (targeting viewers as well as certain characters within the film) for a near perfect exercise in escalation, Cheap Thrills follows two desperate souls as they dive deeper into a game of cruel one-upmanship (for cash and prizes!). There can only be one possible direction for the game to finally take and the film steps you there in believable (and, fortunately, entertaining) fashion. As our contestants Craig and Vince out-do and under-bid each other at each step, the comedy turns darker and an uncomfortable reality sets in to the viewer - are we just as guilty as the two hosts of this private party?

The party in question is for Violet's birthday (played by Sara Paxton and looking far different than her tom-boyish character in The Innkeepers) and it's being hosted by her husband Colin (David Koechner). The party-hardy Colin chats up Vince at a bar (where he and Craig were catching up on old times) and manages to rope the two of them into celebrating the beautiful Violet's special day (even if she seems totally uninterested in just about everything but her phone). Craig hasn't exactly had the best day - he just got fired from a crappy job on the same day he received a final eviction notice on the apartment he shares with his wife and infant child - and he was just considering bailing on home when Colin and Vince convince him to stay for an additional drink or two. He really has no reason to stay (he had only accidentally ran into his old "friend" Vince at the bar anyway), but Colin's ease with flashing money and willingness to make little side bets (e.g. "I'll give you $20 if that girl slaps your face...") has him intrigued. He's in dire straits and currently has no immediate options for making any money. Since his going-nowhere writing career won't provide for his family any time soon, he decides to stay...

Of course, the bets become more valuable, but also a bit more challenging and slightly dangerous ("$500 if you punch the bouncer first!"). They shift venues and finally end up back at David and Violet's house. By now, a rivalry has been set up between Craig and Vince in order to pit them against each other to win individual bets and contests. Only the winner gets money - second place gets nothing. This leads to moments like Vince punching Craig in the stomach during the who-can-hold-their-breath-the-longest challenge when it looks like his clocking may not hold up. In just about any other plot scenario, you might get a bit frustrated that at no point do Craig and Vince consider working together or giving each other a break - to David and Violet's amusement, the game has turned into a complete selfish drive for each player to make as much money as possible. However, the lead up to the events is handled ever so gradually and in a way that completely makes sense given the circumstances and the characters. Vince has been down the loser path before and has seen the inside of prison, so as he eagerly falls into David's keep-the-party-going ethic you can definitely see his how lack of empathy easily morphs into the need to maximize his returns from the game. Craig is much more thoughtful, but his self-esteem, his family and his failure to achieve his goals as a famous writer (or at least as a paid one) allow him to miss the forest for the individual trees. The events force each guy to think that they need to live up to their "manhood". The film acts somewhat as a warning about buying into the cultural framework of masculinity as defined by: Don't take any shit, act tough, suck it up, be the sole provider, don't ask for help, don't look weak, do it all yourself and for God sake dude "Man up!". Pride sure can be a deadly sin...Craig subjects himself to these games (which become somewhat sadistic trials along the way) for his family's well being, but since he hasn't even considered other options or included his wife in any conversation about what they should do next, there's a strong feeling that he is doing it to regain that loss of his hunter/gatherer role. At what cost though?

Even with the view that the film is a commentary about the consequences of following societal conventions, you still can't help but wonder what you might do in the situations presented. At what point would you tap out? Would you not have even joined the party? Do you leave before entering the home of David and Violet? When the previously disinterested Violet suddenly shows interest in you and offers a, uh, win-win activity (with some additional cash for you too), how hard do your scruples push back? In the case of Craig, he puts up a decent enough fight sometimes, but he's sucked in big time to the temptation of immediate money and a solution to his immediate problem. Pat Healy (Paxton's cohort from The Innkeepers) does a great job in selling Craig's desperation and not for one minute did I ever feel that the plot was making those decisions for him - the characters drive the plot. Koechner too is very good - dialing things down a bit from his better known broader comedic characters, he brings just a shade of menace to the role of Colin that always keeps things tense, but can still deliver a funny line at a moment's notice. The film's ability to drop both big and little surprises throughout while still moving towards an inevitable conclusion is a strength that sets it apart from most genre movies. A film that delivers far more than it promises.
Posted by Bob Turnbull at 22:46