Blindspot - "Mr. Smith Goes To Washington" and "The Grapes Of Wrath" 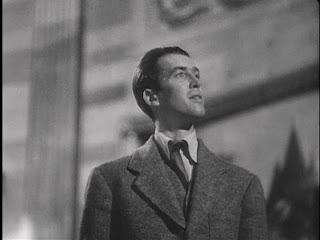 As pre-WWII statements of America, Mr Smith Goes To Washington and The Grapes Of Wrath both warn against allowing the powerful elite control over the little common man - a call to arms often heard on the cinematic landscape and relevant to today's political and economic climate as well. But even though they were filmed within a year of each other (1939 & 1940 respectively), they reach much different conclusions about the country via very different storytelling methods. Their biggest commonality might actually be that each film was a showcase for a blooming star - a 31 year-old Jimmy Stewart looking perfectly young and naive as a hick junior senator in Mr. Smith and Henry Fonda, still with boyish good looks at 35 and piercing eyes that illuminate the black and white landscapes of Grapes, bringing some more mature depth to the strength of Tom Joad. They had each been in the business for about 5 years, had each recently come off star-making lead roles for the first time (Stewart in It's A Wonderful Life and Fonda in Young Mister Lincoln) and then never really looked back. They became Hollywood staples now destined for big things, gorgeous starlet co-stars and future best-of lists. 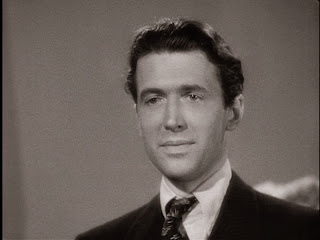 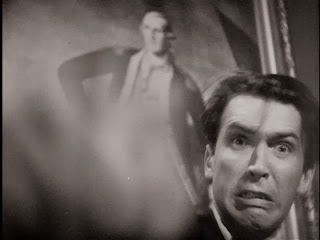 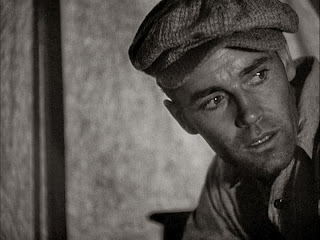 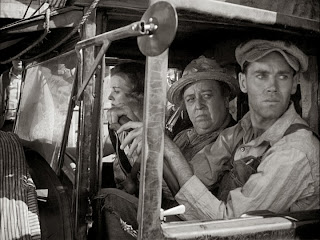 Looking at these films for the first time almost 3/4 of a century later, only one film stands out for me with a story that equals its message - John Ford's The Grapes Of Wrath. A big reason is Fonda's focused take on Joad, but it may be mostly to do with the film's staged approach to releasing its message about the rights of workers. It's not that it's always subtle mind you, but the plight of these migrant farm workers builds throughout the story and allows you to feel more than just sympathy for these poor homeless people. Particularly since Tom becomes someone you can respect and even attempt to emulate as he learns different ways of disarming volatile situations. The junior senator Jefferson Smith, on the other hand, starts out naive as the day is long and - though his intentions are good and "wholesome" - seems to flail against whatever he can't immediately break through. Early on after his move to Washington, the press make fun of his hick background and Smith reacts by going around and punching every writer in the face (including an old man getting into a car). This transition from friendly aw-shucks yokel to rage-filled vengeance seeker doesn't really endear him to you, so when he gets frustrated that his lone idea and cause is threatened due to a bill allowing the creation of a dam (on the property earmarked for his boys camp project), you can't help feel that the day long filibuster that results is mostly a temper tantrum. He ends up on the right path fighting corruption and greed, but he stumbles into it and needs help to navigate the terrain. 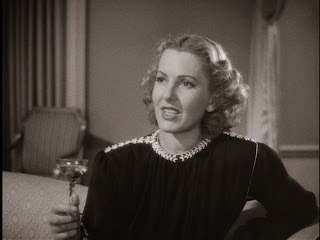 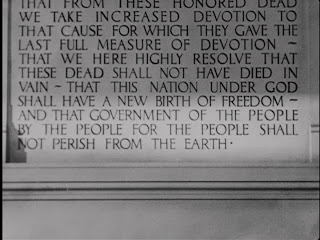 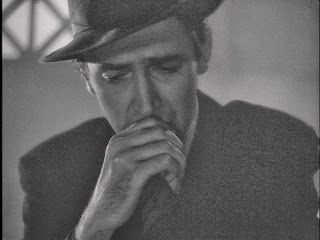 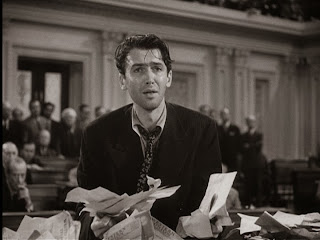 Fortunately, the help he receives is from the wonderful Jean Arthur. As Smith's assistant, she brings verve to the film when she's on screen (even if it's just reacting to those around her with her unparalleled timing) and is a gleaming shining light. Otherwise, I had little connection to the story or characters (apart from the great character actors Eugene Pallette, Thomas Mitchell and William Demarest who pepper the film). Jefferson Smith simply isn't interesting. Oh sure, his eyes are opened to the corruption in government, but there's no arc to his character. Again, he goes from one end of a spectrum to another - being in awe of his surroundings to a cynic in a blink. That awe, by the way, is shown in a cheesefest of a montage showing the Lincoln and Jefferson Memorials backed by "Glory, Glory Hallelujah" and topped by a child reading "Four score and seven years ago...". It's an obvious setup for his fall, but director Frank Capra is so heavy-handed with it that I expected Yankee Doodle to come riding by...Oh, did I mention that Yankee Doodle Dandy was played over the opening titles? Also, I have to be honest and state that Smith simply irritated me - not just with his black/white reactions to everything, but also due to his male-centric views. Granted, this was 75 years ago, but Smith goes from publishing a boys magazine to flogging the benefits of a boys camp and states that his main desire is to "make the Capitol come to life for every boy…". He does appreciate the value of his assistant though and lets her know that "for a woman you've done very well...". If it sounds like I'm being harsh on a beloved classic, it's because my frustrations with the film lie mainly in its black and white perspective. The cronies are bad, the politicians and newspaper folks are cynical, etc. It leaves no surprises for the story and frankly makes his "impassioned" filibuster rather dull. 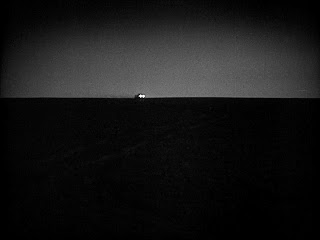 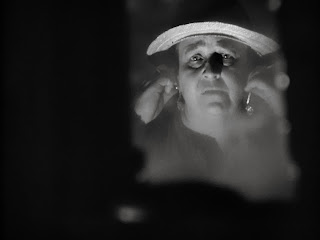 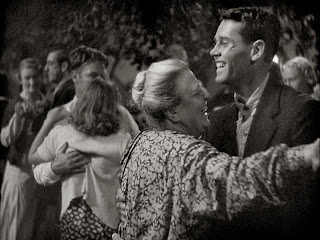 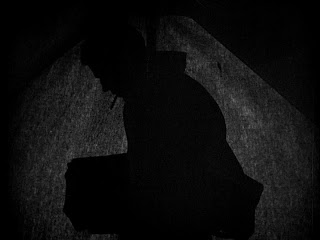 By contrast, Tom Joad starts out having just left prison (with the simple hope of not having to "knock anyone down") and eventually gets to a position of optimism even in the face of hardship ("we're the people that live...") - but he does this in a gradual fashion through difficult circumstances and by listening to others and learning from them. It's immediately easy to react against all the land owners forcing out their farming tenants, but Joad realizes that not all of them are necessarily evil. It's the system that's broken and the owners are actually having their own hands forced by the banks. This is one of the areas where Grapes shines as it acknowledges that not everything is cut and dried. Though the film certainly puts Tom and his family through some pretty rough paces as they travel to California and end up in the migrant farmer camps, it never feels like plot is being dumped on them to drive home any points. Their travels end up not just highlighting the history of these farm workers, but view the variety of opinions and people across the land. When Tom's family pull out of their homestead, they offer to bring along Preacher even though they are all but destitute. It's a lovely moment, but it's quickly followed by Tom's mother taking a last look at her home and stating "never had to lose everything I had in life...". The film wants you to see both sides of the country and everything in between. Later in the film Preacher tells Tom that he can't be a preacher any more since a preacher has to know - and he simply doesn't anymore. "I gotta ask."

Grapes Of Wrath and Mr. Smith Goes To Washington try to show "both sides" of America - the good and the bad - but only Grapes seems to understand that there is a pretty large grey area between the two. 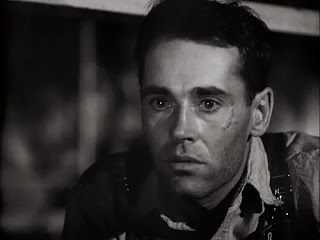