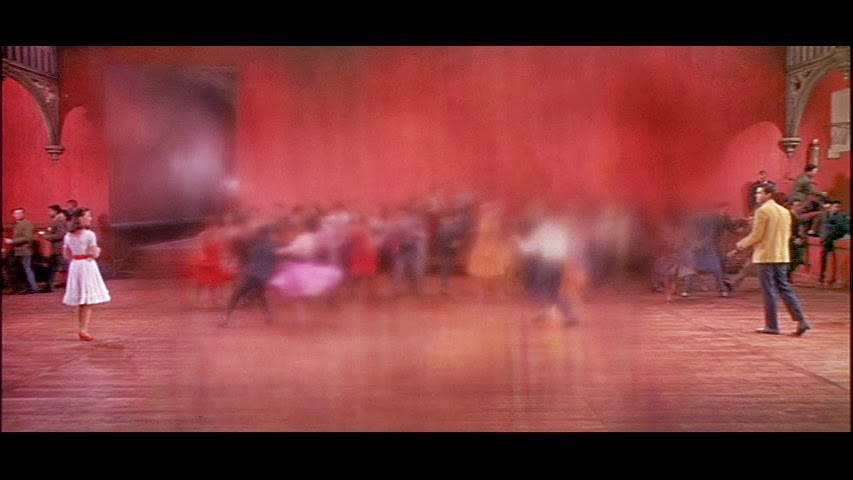 One of the reasons why you may not often hear as much about plot or character when discussing musicals is that they tend to use age old stories at their core. More often than not it's all about those tunes and performances, so those familiar tales are used to provide a familiar landscape from which to launch the song and dance routines. As I sat down to catch up with a couple of classic musicals with well-worn structures - a re-telling of Romeo and Juliet set in the big city and a backstage look at the lead up to a performance's premiere with a big break for a young ingenue - I wondered if either of these tales could be given new life via more than just their music and production numbers...While each brought moments of wonderful creativity and sparkling entertainment (in different amounts), the stories were, for the most part, still born. 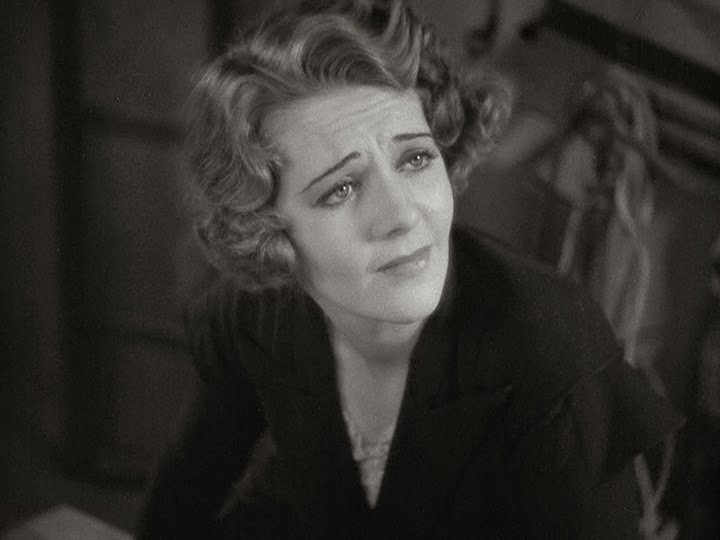 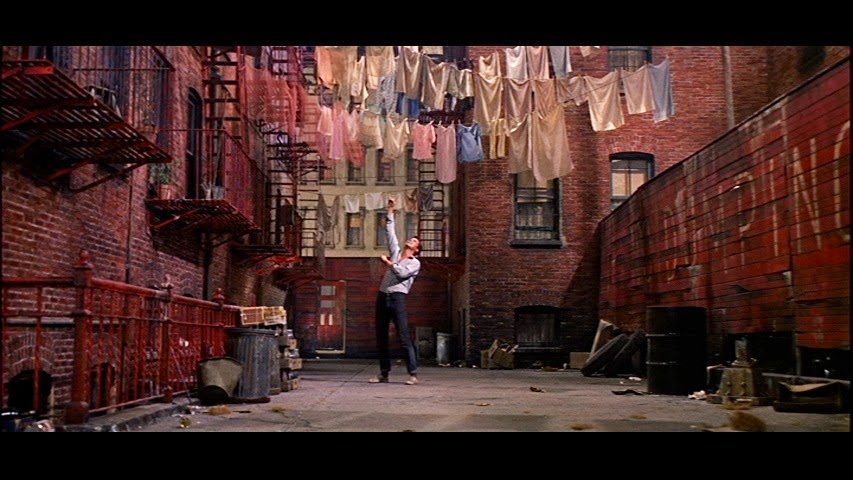 That's not enough to dismiss either film though. In particular, West Side Story is a monument to production design and choreography. Just about every shot in the film is packed with colour from mixed pastels to bright primaries to everything in between in just the right combinations. As a series of stills it would make for an incredible photography exhibit. Of course, much of the secret to the film is its motion in the form of Jerome Robbins' choreography (he's also credited here as a co-director along with the master of many genres Robert Wise). It feels novel and exciting even 50 years down the road. It's sharp and quick and powerful - in short, it's incredibly physical. It's an expression of the character's youthful energy and their inability to find a place to put it, and so it ends up working perfectly during the confrontation and fight scenes where the dancing is essentially the fighting itself. If not every tune fully landed with me, the vast majority did and mostly kept me with the 2 and a half hour runtime. Mostly. 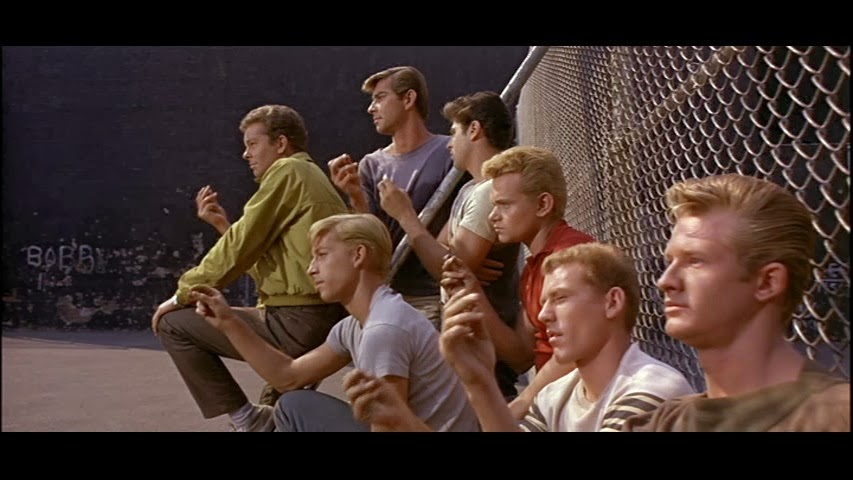 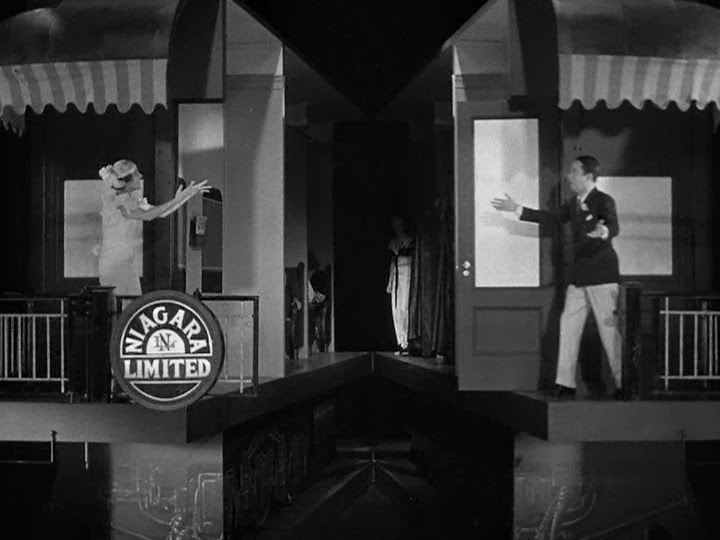 42nd Street, on the other hand, barely kept me focused for its first 75 minutes with a mix of occasionally cute, but mostly dull characters and situations. But then, the final 15 minutes came to life and I was left wanting more. Much more. Again, a great deal of this is due to the brilliant choreography and staging - this time by Busby Berkeley as he opens up the musical within the film (the premiere everyone has been working towards in the previous 75 minutes) into a space that would blow out the walls of most theatres. It's a surreal shift from the blandish happenings we've seen behind the curtain, but since the players are suddenly playing to the camera as their audience, it's an easy shift to make. Berkeley starts with a bride and groom off to Niagara Falls on the back of a train as it splits open to reveal its insides and numerous passengers. From there we move to a stage full of well-attired male and female dancers working through geometric patterns on a revolving stage and then on to a full city street scene (42nd that is), complete with buskers, a subway and even a murder. It's a bit of wonderful fantasy thrown onto the end of the banal. 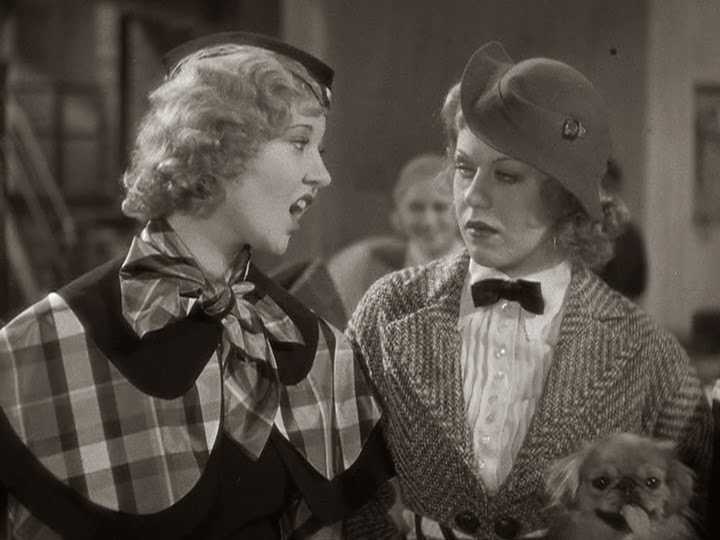 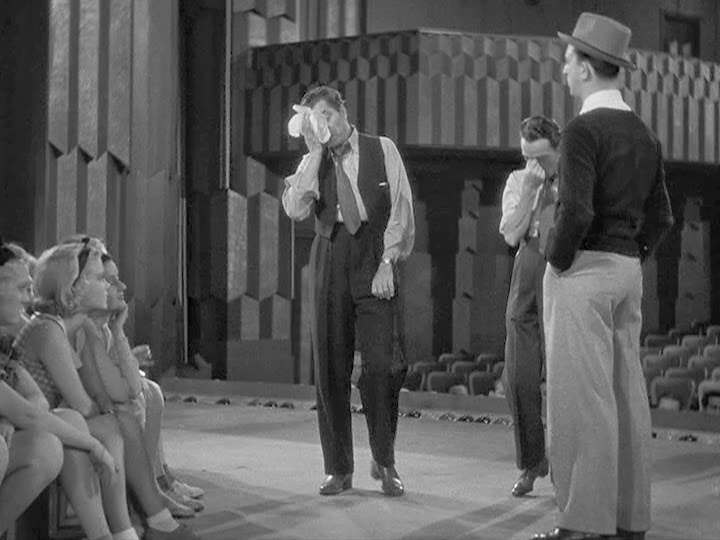 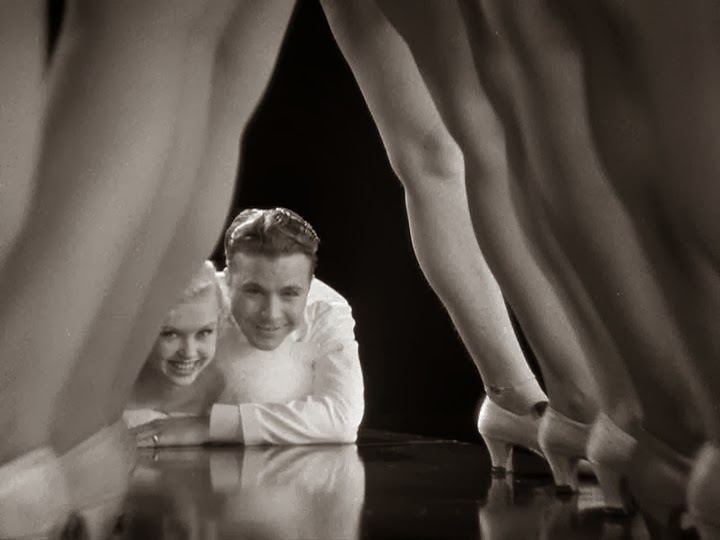 It's a shame too. The backstage story starts off decently enough by focusing on the tyrant director Julian Marsh (played by a fine Warner Baxter) and his attempt to make one more hit play to get back in the black before his doctor stops him from doing any more. His cast infuriates him, the dancers have no rhythm and he needs to make sure his starlet keeps her attention on the man with the money and not her secret boyfriend. Meanwhile a duo of wise-cracking dancers (played with sharpness by Una Merkel and Ginger Rogers) befriend a first-timer (the flat and, frankly, rather dull Ruby Keeler) as they all get put through their paces. But whenever Baxter, Merkel or Rogers aren't on screen, there's such a lag in spirit that everything feels in slow motion - even if you decide to fast forward. Plot ideas are left by the wayside, characters stranded and dialogue left dangling as it fizzles. There was a template here - an old comfortable one to be sure - that could have yielded some nice surprises or nuggets of gold (especially when you have several of the cast members willing and able), but it's rather perfunctory overall in bringing us to those final 3 musical numbers. But what numbers! 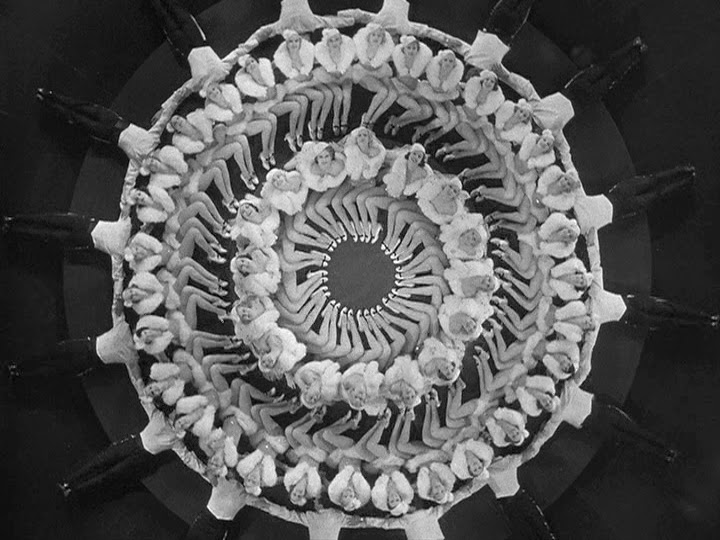 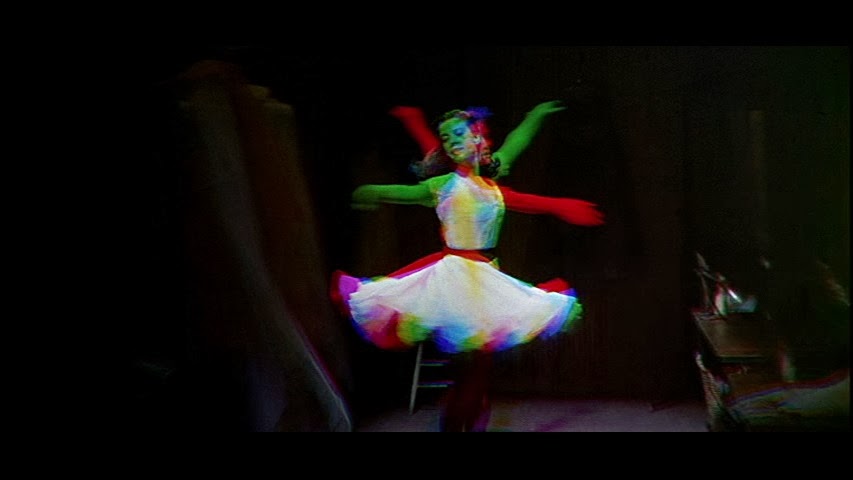 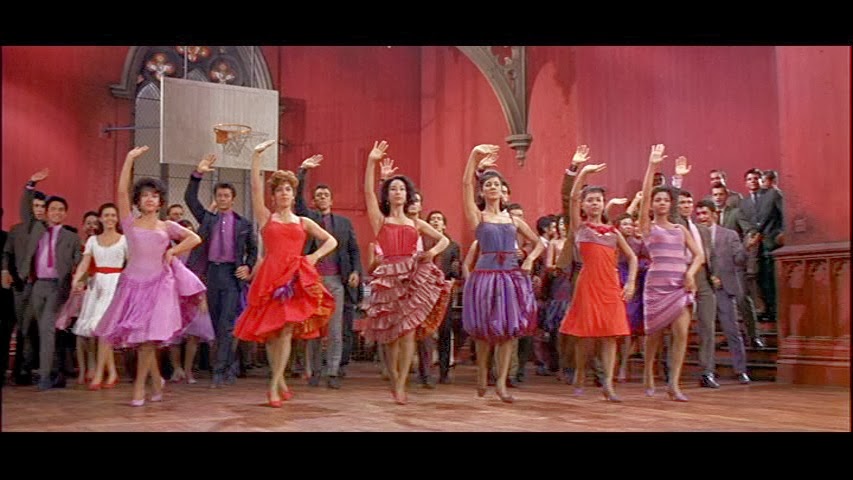 Over on the West Side, the big set pieces and routines are spread much more evenly throughout the film, but the star-crossed lovers drama (one from the Puerto Rican neighbourhood, the other from the Polish district) is half-baked from the get-go. The film handles the visual aspect of "love at first sight" in great fashion (when the two see each other for the first time, the entire rest of the dance floor is blurred on screen except for themselves as the whole world melts away), but once either of the couple gets the focus of the camera (outside of any singing) time slows to a crawl. Tony is as uninteresting as uninteresting gets and Natalie Wood (as lovely and charming as she has been elsewhere) doesn't quite deliver the spunk one would hope from Maria. The rest of the cast is game though - Rita Moreno almost rips her skirt off during her fireball dancing in "America", Russ Tamblyn sets the tone with athleticism in "Jet Song" and a whole mess of those Jets knock the best number ("Cool") right out of that underground parking garage with a few random exclamations of "Pow!". It's damn invigorating actually. Which is helpful while you're watching Tony and Maria coo at each other and waiting for the next number. At least there's always some fine scenery to gaze at in the background. 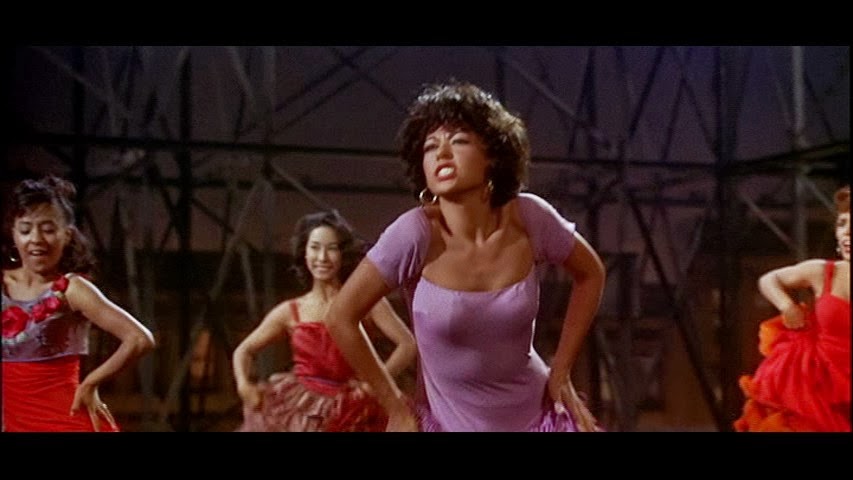 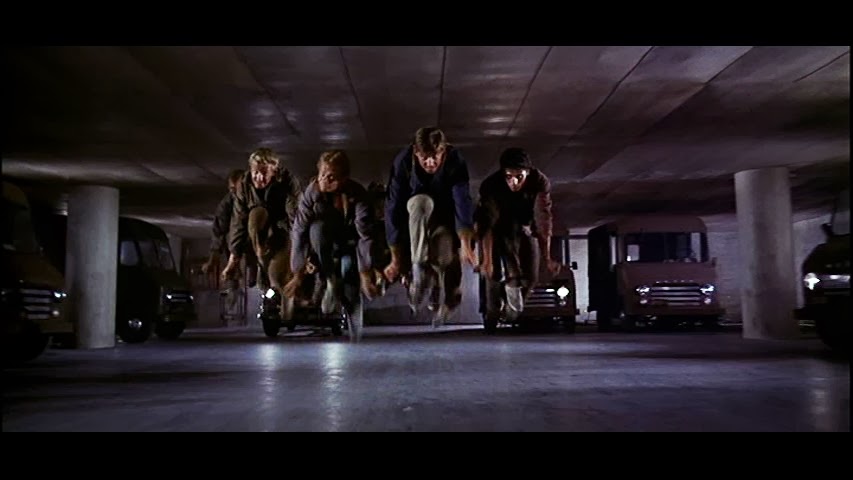 Despite its failure to do anything of note with the Romeo and Juliet plot, West Side Story manages to impress with a unique, engaging and artful approach to transporting a stage play to the widescreen. And while 42nd Street did similar things to alter the audience's notions of what a musical could be on a big canvas (albeit in 1.33:1 and in black and white), it ultimately fails by pushing almost everything of interest to its very last act. Of course, that last act (and even bigger stage-defying fantasies Berkeley created in later films like Footlight Parade and Dames) enabled West Side Story to exist in the first place, so I guess it did provide some new life in the end. 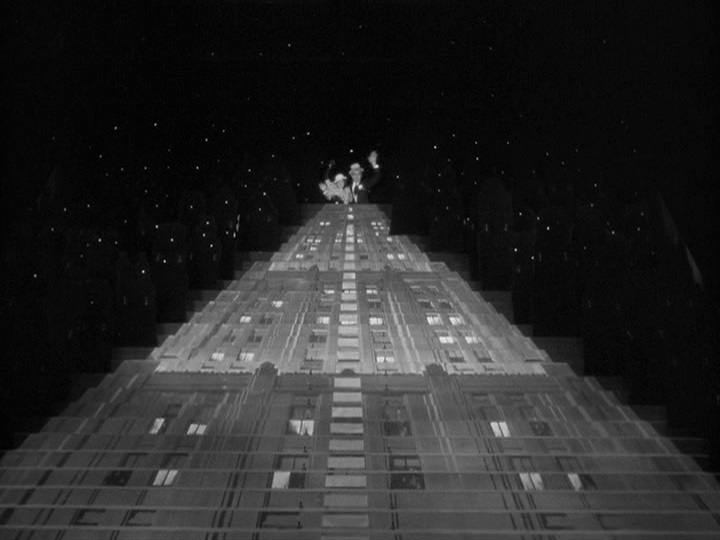 West Side Story was a film that I never was fond of but as the years go by. I started to enjoy it more though there were still some flaws. Mostly in the leads as I don't buy Natalie Wood as a Puerto Rican nor did I care about Tony. Everybody else though I was more into as well as those songs.

Bob, I haven't seen 42nd Street but did catch West Side Story back in 2012 as a blind spot. You're right on about the two leads, who are so dull. What saves the day are the dancing and production design, but that's not enough when you consider the running time. It was not that thrilling for me. I really like the way you set up this post!

For as much talking as we did last night (I'm hoarse today), I feel like we didn't discuss this much...

Something you've tripped over here that I find interesting is the way film as a medium is so multifaceted. You'd think, for instance, that an artform so heavily invested in telling great stories would NEED to tell a great story to succeed. And yet, as you've discussed here - that's not the case.

There's movement to consider, spectacle, imagery, mood, etc. There are so many amazing things that film can offer us, that it can short-sell on one or even more elements, but still make up for it by delivering on one or more others (in these cases, music, dance, staging, and scope). As I get ready to record a podcast about August: Osgae County, I find myself wondering about what a film needs to do to be a worthwhile adaptation from a stage production, and here you give two examples.

As you mention, 42ND tales place in a theatre unlike any physical theatre in the world - one whose stage seems the size of a hockey rink. As for WSS, it ditches the stage altogether and uses the (fake) streets of New York for its playground...allowing a staging unlike anything any stage show could ever achieve.

Great start to 2014, and fun fact: few pieces of music get me in as good a mood as the overture to West Side Story

West Side Story didn't really work for me. The songs are great, and the best thing about the movie. It lost me almost at the beginning with the ballet dancing street gangs. I just couldn't take them seriously after that.

I agree 42nd Street builds towards those final three sequences, but I found humorous moments leading up to them that I enjoyed. There were many double entendres that they got past the not yet fully enforced Production Code.

Thanks all for commenting!

Void, I totally agree on the leads. They really add very little. I actually kind of enjoyed Wood's Puerto Rican accent, but not in the way that the filmmakers intended...B-)

Dan, yeah the length of the movie can certainly be an issue when those leads are indeed so dull. I guess I got just enough bursts of energy from Robbins' choreography that they just carried me through.

Ryan, I was pretty hoarse the next day too - and like you, I felt we didn't close on enough threads (there was more to say about your Charade post too). I don't want to have to box a film into any specific set of parameters: "it has to have a good story", "focus first on the actors", "always storyboard first", etc. Those things certainly work for some films and filmmakers, but others have created great works using totally different approaches.

Chip, I can totally see how you could get pulled right out of the film in that early schoolyard scene. Neighbourhood gangs rarely do pirouettes while acting tough...But it's just one of those cases where it was early enough in the film that I felt they were simply saying "In the world of this movie, tough guys dance" and then they stuck with it. I loved the way their movements worked well with the music, so I was sold. As for 42nd Street, yeah I suppose I might have been overly critical - you're right in that they snuck a few pre-code things in there (Ruby Keeler's character seemed VERY open to random male solicitations for example) - but the contrast between that section and the Berkeley numbers was just too drastic for me.