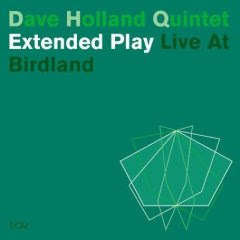 
This 2 disc set of one of the Quintet's dates from 2001 contains long extended workouts of their studio work - only a single track is under 10 minutes and two clock over 20. The length of the tunes gives the band ample space to really flesh out all aspects of the music. The more intense sections are some of the most muscular jazz playing I've heard and the band stays fully in tune with each other throughout. Relentless and always incredibly creative in their approach, this is music for repeated listenings.


Not quite a full bore noir film in my opinion, but it's a solid thriller with many elements found in that genre. Ray Milland's boss (played to slime-ball perfection by Charles Laughton) kills his mistress and then tries to frame someone he only sees in the shadows. He hands this task to Milland who, unknown to Laughton, was the character in the shadows. A race against time ensues as Milland is in the position of being framed for the murder and trying to solve it as well. 1987's "No Way Out" (with Kevin Costner) is essentially a remake of this film.


After what most critics say was a lull in Robert Altman's career after 1993's "Short Cuts" (one of his best IMO), he finished off very strong with 3 straight excellent films before his death last year - this one being the second. And even though it features Neve Campbell (one of my least favourite actresses - she just annoys me on screen for some reason) and a love story I didn't really buy, the film is outstanding whenever we see the internal workings of the ballet school around which the story is based. Campbell is actually an accomplished dancer and appears to hold herself quite well against the other ballet dancers (as far as I can tell anyway) during the many dance centrepieces of the film. They are beautifully choreographed and filmed and alone make this a film to savour. The additional storylines of other characters and the behind the scenes of the school add to the full experience.


The follow-up to Hirokazu Kore-eda's acclaimed "After Life" (which I mentioned in last week's picks), this is the story of 5 children who are left on their own by an uncaring floozy mother (each child has a different absent father). After she leaves a note and some money for the eldest boy, the movie follows their struggles to survive and stay under the radar so that they can remain together. The child actors are all remarkable and incredibly natural on screen. It almost feels like a documentary and in some ways it is since it was actually based on a true story.


Some of the most fun I've had at the movies in a long time. 5 separate stories of how people deal with life and their styles of surviving it. The pace is fast as the stories cut between each other and overlap characters. And absurdity rules with humour ranging from completely silly to extremely dark - a hypnotized man behaves like a chicken, a wife keeps coming back from the dead (with different abilities each time), mini-commercials are scattered throughout, a British hitman and his interpreter accost people and colour schemes that are just a visual treat. Because the film only got music rights for release in Japan, it's not likely to be found in Region 1 anytime soon. But here's the trailer to enjoy:

Wow. This looks amazing. I'm going to pick it up.

It's great fun...Let me know what you think Piper. I think I'm just going to pick it up as well and worry about the multi-region player later. There's a 2 disc edition available too, but I seem to remember reading that the extra features weren't even subtitled. Start brushing up on your Japanese...

hi it is very good blog.:) i like here. writings and pics are very good. if u want to see one it is http://www.terrakki.net/

bbyess
p.s. blod name is the most beatiful

Thanks for the kind words Menonita!

Your own blog has some very lovely drawings of the human body. It's quite interesting to see the different interpretations of the form.

Bob, do you know where I can pick up a region free copy.

I looked on HK Flix and Yesasia and they were both Region 2.

Hi Piper...No, I wish I knew of one, but I believe there is and likely will only be a Region 2 version (or at least not a Region 1 or 0).

What I've read so far indicates that the music rights they acquired were only for Japan and that for any other country the cost would be prohibitive...I suppose that doesn't rule it out completely, but it would be very doubtful.

I will likely just pick up the Region 2 from Yesasia and find a cheap multi-region player.

Loved The Big Clock, which I saw on television a few months back. Charles Laughton is great, isn't he?

The Company, though. Yuk. And my wife was a ballet dancer. The dancing was fine, but he should have made a documentary.

Not a big fan of "The Company", eh James? B-) Well, like I said, there were certainly some areas that don't work, but I thought the dancing was just superb. I do wish he had some more interesting lead characters though.

Laughton? He's just great...I wish we could've seen some more directorial efforts too (since "Night Of The Hunter" is so freaking great).