Ocean's Twelve - It's Not A Heist Picture


This is my contribution to The Misunderstood Blog-A-Thon. 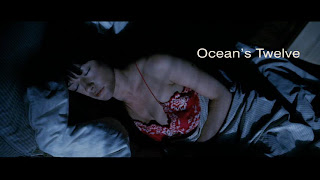 There seemed to be almost unanimous disdain and even hatred of Ocean's Twelve upon its release a few years ago. Those who loved Ocean's Eleven as a fun heist picture thought the sequel completely missed the target and that the thefts and timelines made no sense.

Well, first off, everything did make sense and the timelines match up fine. And second, it wouldn't have mattered if they didn't.

Ocean's Twelve is not a heist picture. It's an Art Film.

Although Steven Soderbergh uses film techniques to tell his story in an interesting manner, it feels like he's actually done the reverse - the story is there to serve his playing around with the techniques. That's fine by me as Soderbergh is a master at creating great looking visuals (the "Film Couleur" of The Underneath, the different film stock of Traffic, the recreation of a 40s film in The Good German, etc.). Style over substance? Well, for me, the style (at least in this case) IS the substance.

The above opening frame sets things up. Brad Pitt has just run out on Catherine Zeta-Jones while she sleeps. In a steal from the famous rain on the window scene from In Cold Blood, the shadows of rain falling by a window fall over her face like tears (hard to see in the screen capture - trust me on this one). And from here, just about every chance Soderbergh gets, he uses filmic devices: freeze frames, chopped timelines, black and white to colour transitions... 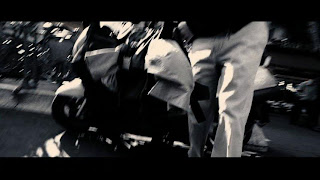 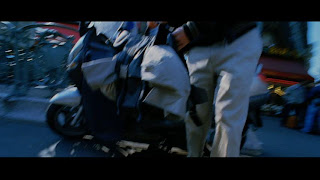 ...on screen titles describing time or location changes (in this case, we see the first 4 half second shots introducing the city of Amsterdam)... 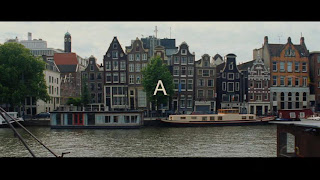 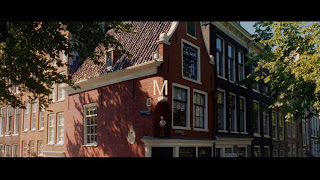 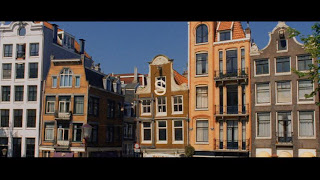 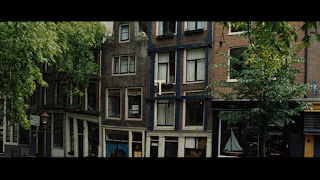 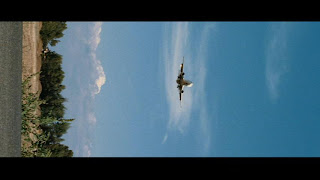 etc. But my favourite devices employed in the film are the colour filters and the terrific music throughout.

The contrasting colours of orange and blue seem to be the predominant ones used during much of the film. Why? I really don't know. But it looks terrific. 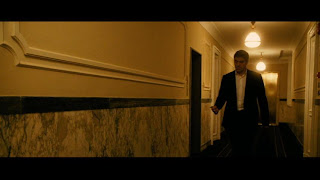 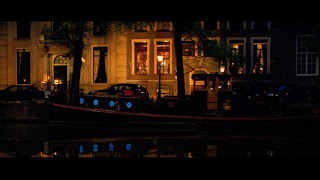 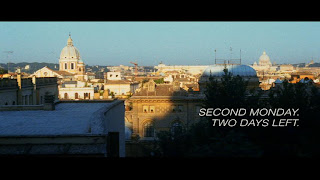 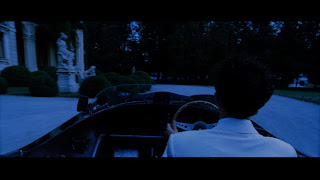 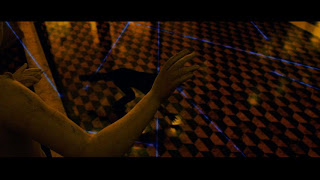 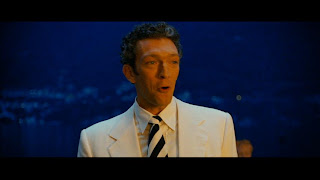 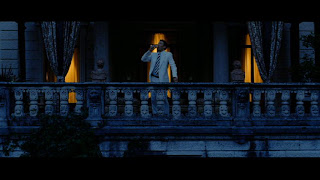 Let's go back to that fifth image in the above set. The dance through the lasers during The Night Fox's theft of the Faberge Egg. Orange and blue is the colour scheme of course, but the scene is made by David Holmes' accompanying music. It's a great match of the visuals to the music as it truly feels like the master criminal is dancing through those random laser beams while that music plays in the museum. The scene, of course, is absurd if you read the film as a heist picture. Physically impossible. And yet it brings a smile to my face every time because it is such a joy to watch how artful it is.

Indeed the other thefts in the picture are pretty nonsensical. The gang probably would've had to spend more on the entire set of equipment necessary for the raising of that building then the value of what they would've stolen. And the last heist involving Julia Robert's character? Ludicrous to even conceive of it (though perfectly valid for the overall plan hatched at the "6 days left" mark).

But it doesn't matter. Soderbergh is using the medium and a fun story to play. To create a work of art that can be rewatched and enjoyed time and again for all of its styles, techniques and composition. Ocean's Eleven and Twelve are two different movies to be savoured in different ways. And when Ocean's Thirteen comes out in a few weeks and the reviews start proclaiming how it's a return to form after the disappointing middle picture (I'm just assuming that it will be more like Eleven), it'll be yet another case of people projecting their desires for what Twelve should have been in their minds (a heist picture) instead of regarding it as what it was (an art film).

I like this. Makes me want to finally sit down and watch the whole movie.

Thanks for the comment Arden. I'd love to hear what you think once you've viewed it.

Especially after looking through your blog and reviews...Great stuff!

I really like your blog and hope you'll include my blog on your list of movie blogs.

I do agree with what you said but at the same time I don't believe that it forgives the lack of a plot. So for the part, I agree with you about: When I was watching Ocean's 12, I do remember thinking "Wow, I am in the presence of something extroadinary." You're absolutely right that there was a great feel to the film, and I liked the film up until the point where things did not get resolved.

Even many of the actors involved in Ocean's 12 have said the film was a little excessive in glitz and glamour. I am also not a believer that art and commerce is an either/or situation and that when something goes under the guise of an "art" film that it has liscence to brush over important filmic elements. A film like Mulholland Drive or a Terrence Malick mood piece I might forgive because they're not explicitly about story, but I believe Ocean's 12 was trying to be about story.

Thanks for the kind words Okonheim. Your blog seems to have a lot of interesting topics, so I'll have to dig into the meat of it later today...

By the way, I totally agree with you that an "art" film doesn't HAVE to skip over plot or other standard devices. Perhaps I didn't express it that well, but style without substance can still be an interesting and worthwhile experience. Including substance, of course, can make it even richer.

I disagree with your assertion that Ocean's Twelve lacks a plot though. I focused on the artistic elements, but the story remains consistent throughout and does indeed resolve itself. The key is to realize that after they visit LeMarque (at the six days left point), eveything they say and do is being monitored by the French criminal Toulour. Especially in their warehouse - you can see this at the end of the scene where Toulour is working out on his balcony. The camera shows a video screen that shows the inside of the gang's warehouse and you hear Matt Damon's voice through the speakers just before it cuts to that exact scene inside the warehouse with Damon continuing the same sentence you heard through the speaker. So they expected and planned to get caught in the final theft with Julia Roberts.

I know many people see this as a cheat. I like it. The film didn't telegraph this, but there were some subtle clues that make further watchings enjoyable.

Thanks again for the comments!

Excellent Bob, I just added a direct link to this article at Moon In The Gutter.
I love this film and felt it worked as a delecious homage to some of the best sixties co-productions that would combine the art and commercial film world.
I agree with everything you wrote here, and was glad to see you giving special mention to Holmes magnificent score (which I think is one of the key works in an already incredible career).
Great post, and I look forward to making your blog one of my regular visiting spots.