Geez, you take a few days off from posting and your hit count goes straight down the tubes. It's like people are expecting regular intervals of...what do ya call it...content. 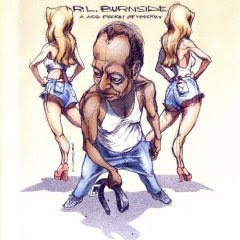 
Cranky gut bucket blues is R.L. Burnside's forte and when combined with the raw electric attack of Jon Spencer (and his Blues Explosion), you end up with an amped up shambling walk through the juke joints of the Southern States. I'm not a huge fan of Spencer's music (or his singing style), but Burnside manages to keep him in check and pulls out his strengths. Burnside himself gives an appropriate summation of the album in "The Criminal Inside Me" when he says If you don't get outta my face quick/I'm goin' kick your ass, you son of a bitch. And dammit he means it. 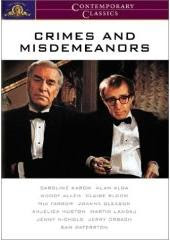 
Two men at different stages of their marriages (one trying to end an affair and the other considering starting one) are the focal points of the crimes and misdemeanors taking place in one of Woody Allen's best post 80s films. Martin Landau is terrific as the medical professional who kills his girlfriend just as she is ready to spill the beans about their long term relationship and then has to live with what he has done. Allen's character (a documentary filmmaker) also faces his own moral quandries - though smaller in scope. In order to earn some money, he takes on the job of filming his slimy TV producer brother-in-law and this necessitates the shelving of his dream project. With the job comes production assistant Halley (Mia Farrow) who becomes the object of his desire since his own marriage has become quite stale. The sharp, funny and occasionally sad script is solid from start to finish.


As with the previous "Ocean's Twelve", this most recent entry in the series is not really about the plot or the heist. Don't get me wrong, those elements are great fun and (if you are willing to let reality take a short holiday) have consistent stories whose convoluted threads manage to sort themselves out in the end. But the films are really playgrounds for director Steven Soderbergh - they allow him to experiment with new techniques (ways to introduce characters or impart information), dabble with colours and essentially get his buddies together to have a party with very expensive equipment. Though some may feel it to be a private exclusive party, I always feel quite welcomed. 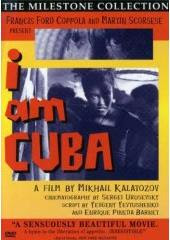 
The stunning black and white cinematography of this Russian directed film stood out from just about everything else at the time it was made. And so did its propaganda - unflattering portrayals of Americans, the plight of the working class, etc. And though the messages of the four individual stories within the film are far from subtle, you get to see a great deal of the people, places and ideas of Cuba at that point in history. The camera work and visuals are the true stars here though - in particular two separate tracking shots that have influenced many directors (Scorsese and P.T. Anderson to name but two) and remain marvels of technical achievement even today. It also doesn't hurt that the land and the people are so incredibly photogenic... 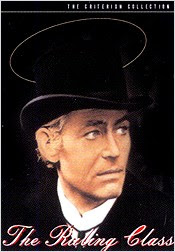 
Peter O'Toole plays a young British man who gets pulled into duty in the House Of Lords after his father dies accidentally. Considering that he sometimes thinks he's Jesus Christ and other times believes himself to be Jack The Ripper, you can see how the rest of his family may be somewhat concerned. And so what do you do when insanity is all around you? Well, you break into song! What better way to poke fun at the British class system than to do it through a black comedy murder mystery musical. This is the kind of role tailor made for O'Toole - he clearly relishes playing a character who is obviously bonkers but who may very well be smarter than anyone in the room at any given time.
Posted by Bob Turnbull at 16:39

I'm totally curious about I Am Cuba so thanks for the review. Hopefully I'll get a chance to check it out soon.

And yay for The Ruling Class! I love that film but I haven't seen it in many years. I really should give the Criterion DVD a look.

Re. Ocean's 13, "As with the previous "Ocean's Twelve", this most recent entry in the series is not really about the plot or the heist. Don't get me wrong, those elements are great fun and (if you are willing to let reality take a short holiday) have consistent stories whose convoluted threads manage to sort themselves out in the end. But the films are really playgrounds for director Steven Soderbergh...." So, so true. Soderbergh seems to tiptoe along that art/entertainment line better than anyone else. I liked Ocean's 13 a lot, but it's time to put those films to bed. Bring on the Che pictures!

Bob, I own The Ruling Class and have yet to see it. I purchased it a while back due to its subject matter and just haven't gotten around to see it.

Thanks for all the comments...

Kimberly, I'd love to hear what you think of "I Am Cuba". I haven't been able to see the new DVD, but I hope it's a much cleaned up version of the relatively crappy old one. The audio/subtitles were kind of a problem as well...The dialogue is in Spanish, but with Russian dubbing on top of it (so the both mix in together). There are English subtitles, but when there is English dialogue (with the Americans), the subtitles stop - but the Russian overdub is still there, so you can't really figure out what is said...

With all that, it's still a glorious thing to see.

Chet, I would be happy if Soderbergh kept cranking out the Ocean's movies, but yeah, he needs to do other stuff as well...Take the experimentation and incorporate it into other films. So, you know, Che in oversaturated colours doubling down...B-)

Piper, I haven't seen "The Ruling Class" in a few years myself, but O'Toole certainly leaves an impression...I've just recently had the inkling to see it again though.

Been wanting to see I Am Cuba for ages...

You know Thom, I think it would be right up your alley...The cinematography and camera work is quite astounding. Could be a good pick for 1964...B-)