I hadn't heard of Carlos Saura's Flamenco Trilogy when Criterion's new Eclipse line of releases announced it several months back, but I was immediately curious. I find that dance on film can be incredibly exciting and visceral. For example, Robert Altman's "The Company" may not have a great story, but the dance sequences are glorious.

So I popped in the first of the three Saura films with pretty high expectations - and had them all exceeded. I knew right away that I wanted to post something about it, but I don't know how much I can say (or even show via screencaps) that will get across the experience. The film is all about movement and rhythm and drama writ large. There's the quick, sharp, slashing motions of arms and legs for exclamation; the whips of heads turning in sync with snapping fingers; a smoothly raised leg pausing just ever so slightly at the top of its arc; pleading expressions on faces; THE MUSIC; etc. It's quite exhilarating.

It opens with a 15 minute sequence of the dancers and musicians arriving at a rehearsal hall with all their gear - makeup, outfits, personal belongings. We watch them slowly prepare to move out to the dance floor. 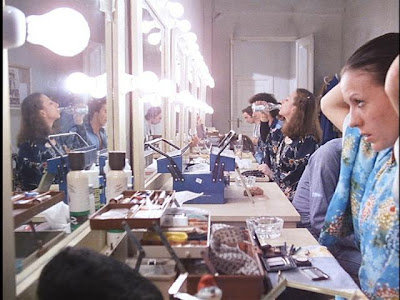 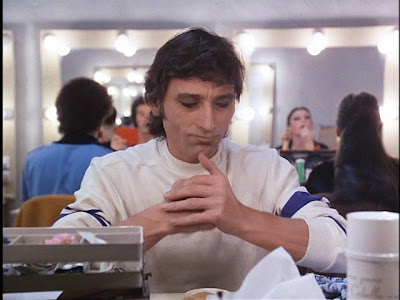 The leader of the troop is Antonio Gades - a striking figure who leads the group through some warmup exercises throughout the next 10 minutes of the film. The ease with which these people accomplish the moves he lays down for them is, frankly, damn annoying. Dancing for them is like breathing for the rest of us. Within the warmups, there's a section where the dancers spin across the floor one by one. Even though it's just a practice exercise, you can see several of them immediately throw grand dramatic expressions on their faces as they begin the movements. It just seems to be ingrained in them. 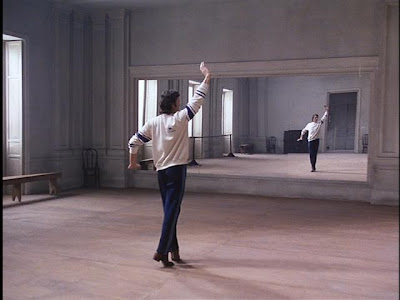 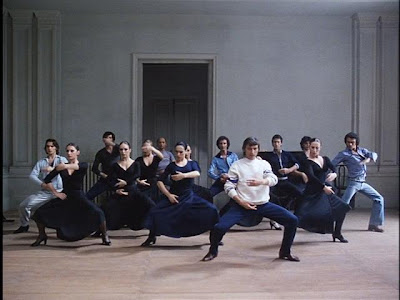 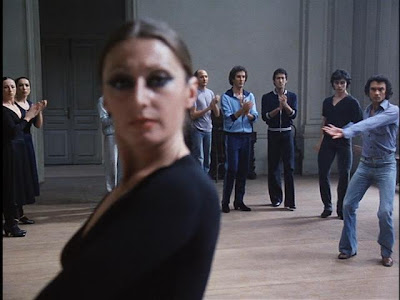 After another short prep sequence, the remaining 40 minutes of the film is devoted to a full dress rehearsal of the Federico Garcia Lorca play of the film's title - adapted for dance and song. Setting a single motionless camera to capture the whole performance would've made for an excellent film, but Saura brings the camera right into the thick of things and adds to the fluidity of the dancers' movements. He captures their expressions in closeups, slides the camera along the floor with the whole group and brings attention to various body parts. It's never flashy but it's incredibly effective. 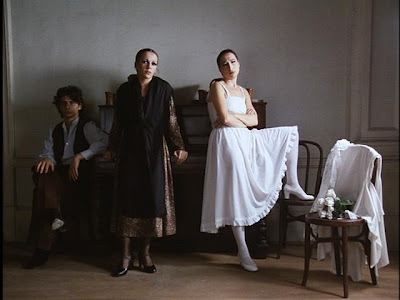 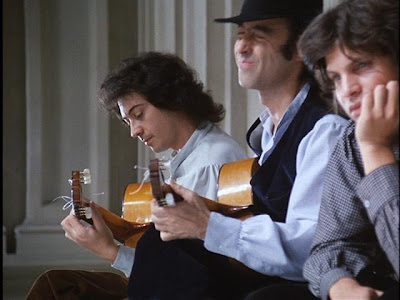 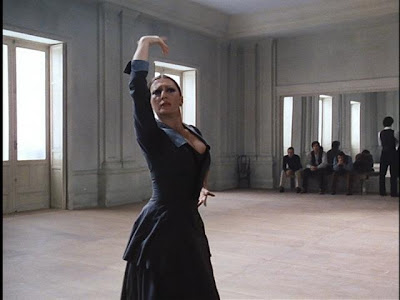 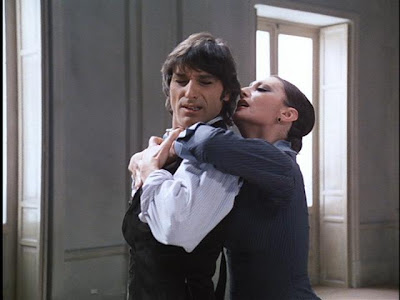 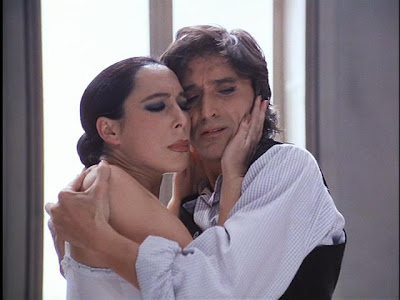 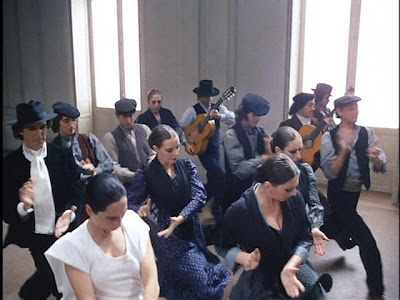 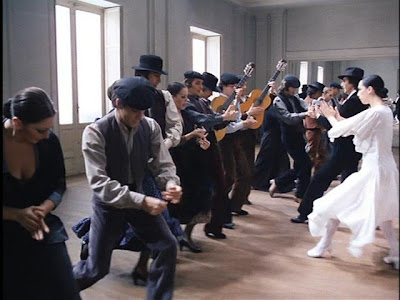 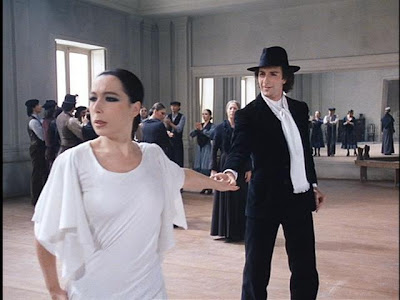 The story is pretty simple and much is conveyed via the dancers' expressions and through the lyrics of the songs (there's almost no spoken dialog in the play). On the day of her wedding, a woman runs off with her lover who has also abandoned his own spouse. The newly wed husband persues the couple and challenges the other man to a knife fight with not unpredictable results. That basic story allows for a number of other issues to come out such as the role women have in this particular society...Which is to say the role they DON'T have - that of choice makers. As well, men are also expected to take on certain roles, the biggest of which is to behave as MEN. This of course leads to the confrontation of the husband and lover.

The 6 minute knife fight that closes out the story is quite extraordinary. The entire sequence is done in silence and slow motion - not by slowing down the film, but by the dancers themselves smoothly stepping through the well choreographed fight at about 1/8 speed. I can't even imagine the incredible strength and control it must take to move like that for that long a period of time - bending, stretching, balancing and never being able to relax into normal body movements. 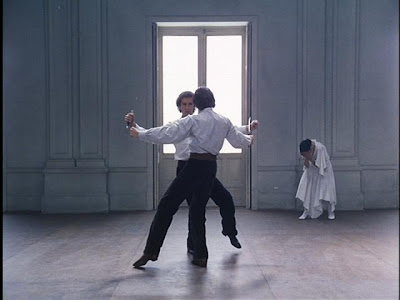 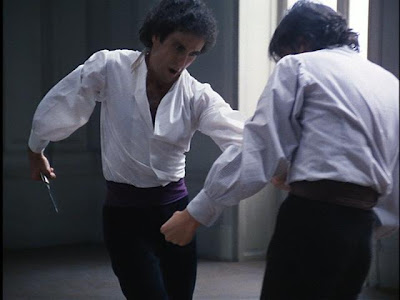 It's a remarkable work of art. I can't wait to see the remaining films.
Posted by Bob Turnbull at 23:14

Wow. I had never heard of this. Look forward to checking it out though, especially since its been given the Criterion treatment.

Added a link to your blog in the link list of my page today. Hope that's cool with you. Feel free to do the same if you're up to it. Ha.

Hey cg...I'd to hear what you think if you see it. Just to clarify, it's part of the Eclipse line from the Criterion folks - so the discs have no extra features and they don't spend as much effort into the transfers (though it looks fine).

Thanks for the link! Yep, I've added you too...

This looks amazing. I love the Lorca play (and the others in the triology) and I've seen a version of the play without song and dance live, but this will be on my queue now.

Bob - I've been a huge fan of Saura's since I saw Carmen way back when. I had the thrill of my life when I got to hear him speak in person at a screening of his film Iberia. He said that he has made many films, but seems only known for his dance films. Interestingly, he was a dancer before he became a filmmaker, thus his affinity for the subject. The trilogy is one of the best in dance cinema - interesting to see Cristina Hoyas as the lead in this one and "marginalized" in Carmen>

Thanks for stepping this one up for the blogathon.

Hi Whitney. I hope you like the film if you see it. All three in the trilogy are great and contain terrific emotional dance scenes.

Marilyn, I'm guilty of only seeing his dance films so far (this trilogy and "Flamenco" - which I didn't like as much though Storaro's cinematography is stunning as always), but at this stage I'll watch anything he's done.