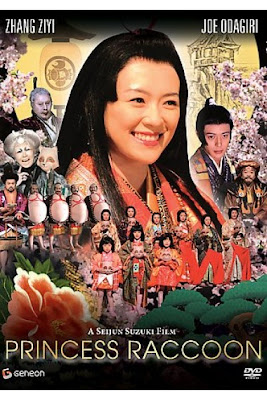 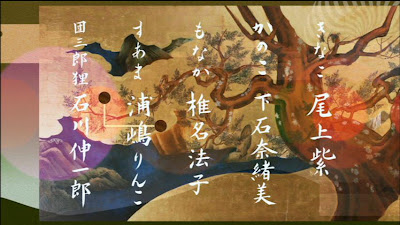 "No man should love a raccoon".

Perhaps that opening line of Seijun Suzuki's 2005 film "Princess Raccoon" (or "Operetta Tanuki Goten") may sound like obvious advice. Or maybe something that really kinda goes without saying. But since this is a Seijun Suzuki movie, you can't just go around assuming things... 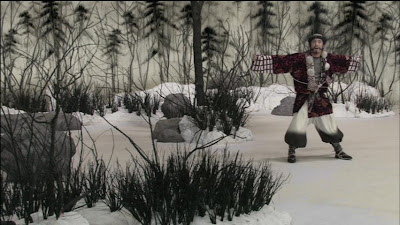 Working with several different Japanese folklore tales, the film presents the story of young Prince Amechiyo who encounters and falls in love with the lovely raccoon spirit of the film's title (played by the - did I already say lovely? well it bears repeating - lovely Zhang Ziyi). 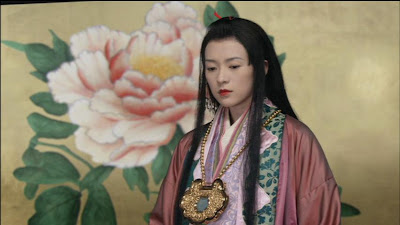 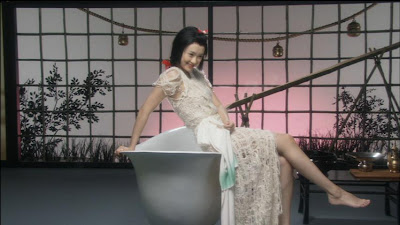 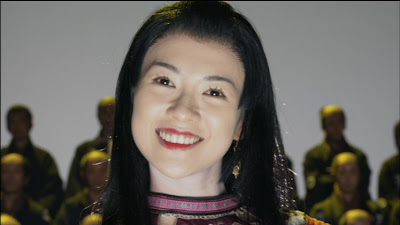 More important than the plot really is the staging of the story - as its Japanese title indicates, it is indeed an operetta and the story unfolds through numerous songs (in many different styles) with broad acting, broader gestures and brash sound effects as well as the occasional comic relief character. To further emphasize things, it is actually staged as a play would be with typical sets and props. 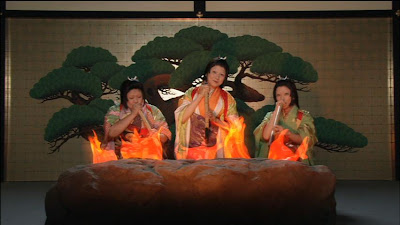 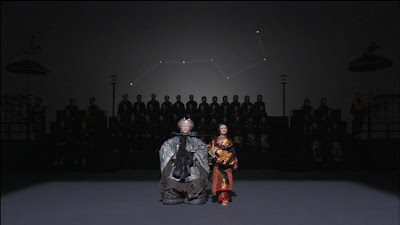 However, Suzuki uses the fact that he is filming these staged events in order to superimpose backgrounds, move figures around and do many other little tricks that obviously couldn't easily be done during a play. And yet he still keeps it very simple - the effects are distinctly on the cheap and add an air of "cheesiness" and fun to the whole thing. 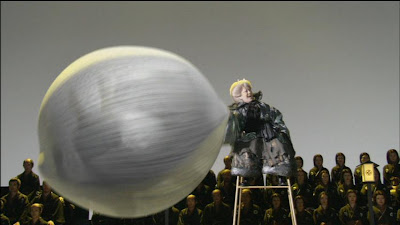 The numerous song styles are a clear indicator of the lack of seriousness. My first thought when the short "rap" number began with the two old characters was, well, horrified fascination. But when I put it together with the short tap dance routine, it made more sense...It's taking the standard stage/musical cliches and reworking them all into a fantastical tale. 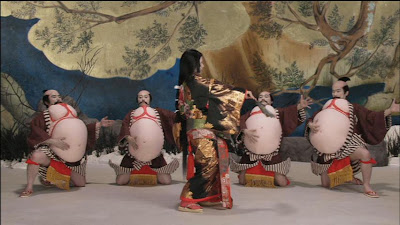 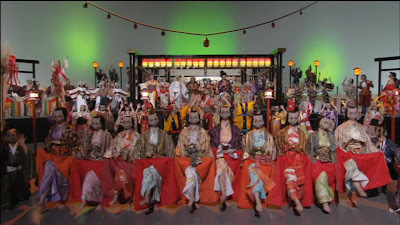 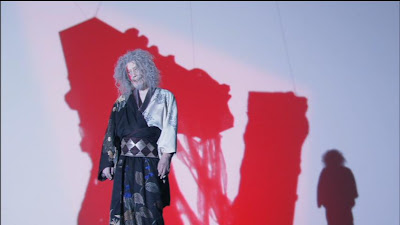 If you accept that these are design points for the film (through limitations Suzuki has set for himself) and have a sense of humour about it all, you'll likely do fine...If you want to approach this as linear storytelling or try to put a standard movie watching framework around it, you'll fail miserably and walk away shaking your head.

At the very least though, it's a gorgeous film to look at. The beautifully coloured sets, wonderful background visuals and inventive lighting are alone enough to keep the viewer's attention. 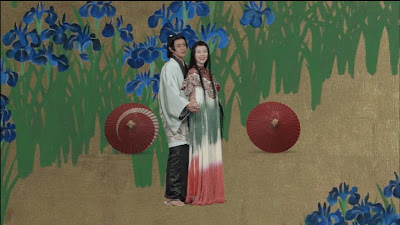 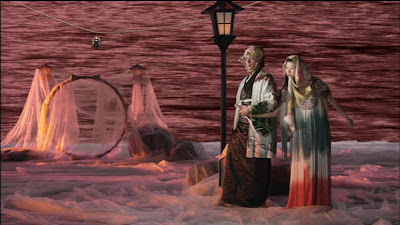 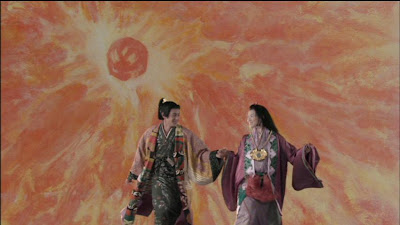 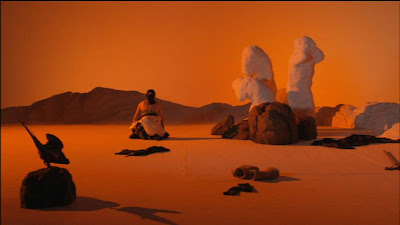 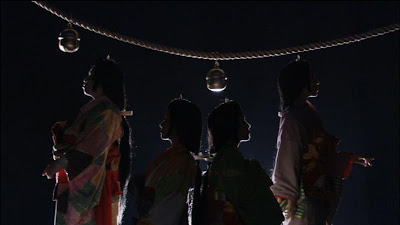 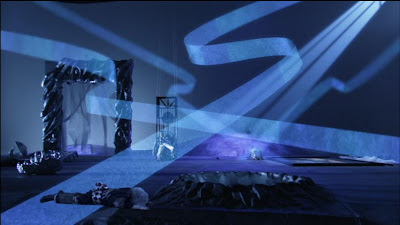 But there is also a story under it all. We've been forewarned that any love between a human and raccoon should be doomed, but apparently during the thirteenth moon there may be a chance for our lovers. It all begins poorly for young Prince Amechiyo though, as he has been banished to Mt. Kairasu by his father, the Lord of Garasa Castle (just as his mother was many years before for disobeying her husband). His son's crime? He has finally reached the stage where he may outshine the Lord as the fairest of them all. After being put to sleep, Amechiyo is carried to the base of the mountain but ends up being dropped in Raccoon Forest. The raccoons who find him are very mistrusting of humans and believe them to be the bearers of disease that will eventually destroy their forest. As the prince and the princess begin to fall in love, the raccoons may prove to be right as the Lord decides that he will wipe out Raccoon Forest so that he may build a new castle on the mountain. 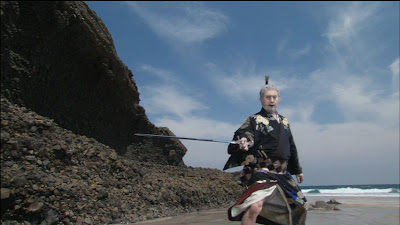 If this all sounds a little whacked out - it is. But I found it heaps of fun. In the end, I probably found "Pistol Opera" a bit more entertaining since Suzuki plays with storytelling conventions in it a great deal more by adding subtext and context via his images. As well, setting it in a world at least somewhat akin to our own gave it a greater surreal feeling. "Princess Raccoon" is straight fable - but still an entertaining and beautiful one to watch. Just don't try to guess what you might see next... 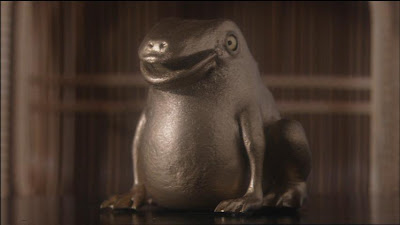 I like your viewing choices because they generally tend to be movies that I don't plan to see. After reading your posts though, especially with the terrific screencaps, I often have an itchin' to go out and find them.

Thanks Thom...That's why I throw out so many screencaps - I think they speak far better for some of these films then I could.

Just be in the right frame of mind if you plan on watching "Princess Raccoon". The kind that is slightly askew and preferably a bit warped.