Out of necessity (likely in order to preserve his sanity), sometime in the early 1960s director Seijun Suzuki began a somewhat different way of telling the B-movie scripts being handed him. Depending on your point of view, he either became a master of indirectly moving plots along via visuals and non-linear scenes or he just no longer cared about his audience and perhaps had lost a grasp of reality. I'm in the former camp, but unfortunately his studio in the late 60s was more in the latter. They fired him after he delivered the terrific Branded To Kill - the story of an organized crime killer who becomes a target of his peers after failing an assignment. He had previously been warned to get back to more straightforward storytelling. I expect Suzuki had his walking papers within the first 10 minutes of the studio viewing Branded To Kill. 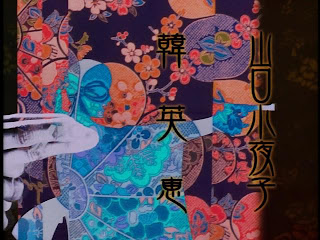 Now I suppose a director who has had 6 of his features released by The Criterion Collection may not qualify as being misunderstood or as the maker of trashy films. But his 2001 release Pistol Opera is typically considered (if at all) as an example of a director losing his freaking mind. Or perhaps more simply going overboard with no idea of what he wanted to accomplish.

Bah I say! It's glorious art. Not just for the colours bleeding through from one scene to the other or the, ahem, unique acting stylings of his cast. But it's his unconventional and essentially experimental method of telling the story that seals the deal for me. 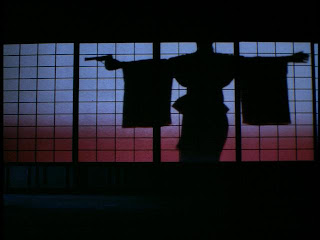 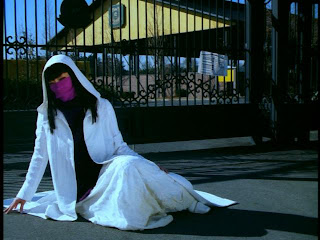 I guess some discussion of the story couldn't hurt. Stray Cat is the number 3 ranked killer within organized crime syndicate The Guild. There seems to be some infighting and jockeying for position going on as the killers end up getting pitted against each other. There are a variety of other characters - her agent that gives her assignments, the retired killer who gives her advice, a young girl giving help who wants to be taught how to kill as well as a raft of other professional killers (with names like Hundred Eyes, Painless Surgeon and Bumbling Man). The No. 1 killer is Hundred Eyes who seems to be dispatching most of the other ranks and has given Stray Cat notice. 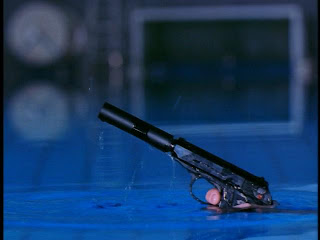 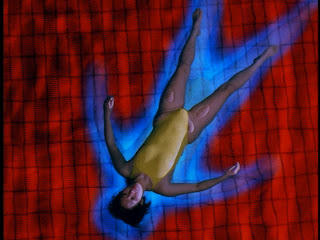 A follow-on of sorts to his last studio picture of the 60s (the above mentioned Branded To Kill), Pistol Opera pushes Suzuki's style right to the edge. That style focused less on the need to carry the viewer through the narrative via dialogue but instead using visuals that implied the action. It's carried to its absurd limit here. But that's what's great about it. There's enough information provided so you get an idea of the plot and then you can sit back and enjoy the visuals. Each individual scene is its own piece of art - sometimes surrealistic and sometimes like modern pop art. So the story is really just something on which to hang the beautiful images. 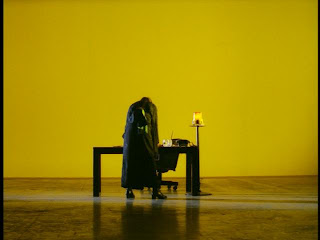 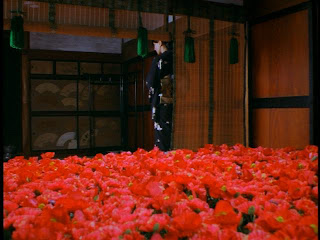 The dream like nature of the visuals adds a great deal to what is otherwise a well-worn genre. Strolls across boardwalks with orange seas behind and wandering ghosts. Blue painted men dancing with a character before she is fatally shot. A huge backhoe dumping red flowers into a house. The constantly changing background colours and spatial relationships between people. All this serves not only to give a feeling of what the characters are imagining but it also keeps the viewer in a perpetual state of amused bewilderment. 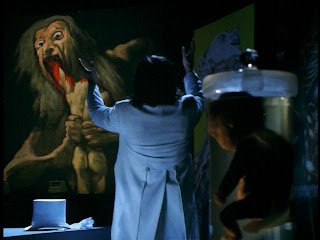 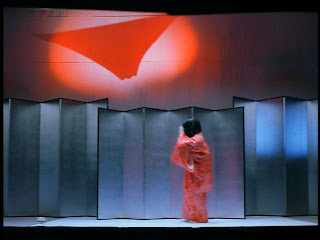 Want Sexual imagery? You might just find a few examples throughout the film...The gun, of course, is ever present. Stray Cat states at one point it is her man. But her agent, who seems to long for a lesbian encounter with Stray Cat, denies her the gun. And then there are the less subtle scenes...But they're all stand alone instances and don't necessarily add up to a grand statement or work towards a unified theme. 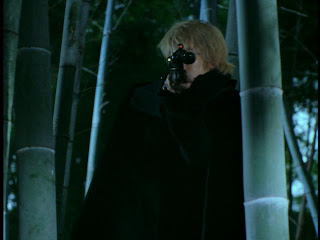 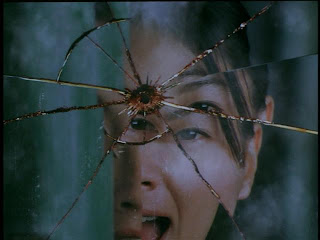 And that's fine. It's great actually, because the film absolutely wants you to enjoy and revel in the craziness. You can't help but laugh with the glorious absurdity of it all. Let it wash over you and know that you simply will not be able to predict what will come next.

The music oddly fits the film, though again, it's nothing you would really expect. Jaunty reggae rhythms and loungy jazz riffs dominate the incidental music throughout. The opening theme song kicks the film off in appropriate style using an off kilter 30s swing and really sets the mood for what is about to follow (if you seriously think something normal is about to occur after that opening blast, then you just aren't paying attention).

You can hear it here as part of the film's trailer. 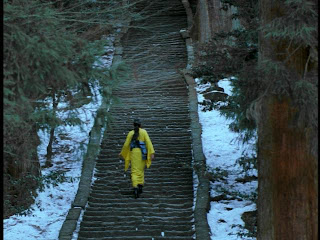 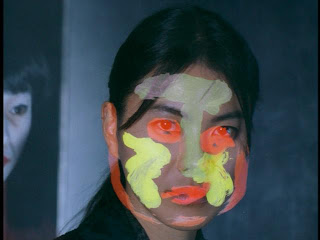 Prowl IMDB and you'll certainly see a range of opinions with many posts proclaiming this the worst film they've ever seen. That's fine. But for those of us who love it, there's no claim that it's deeper than others can fathom. Don't try to understand it scene by scene or line by line. Just let it roll over you. It's no wonder that I've included so many screen shots that do a much better job describing the film than my few words... 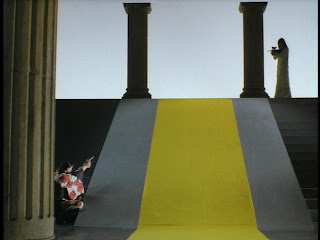 It's nice to see Suzuki celebrated here! I think people forget that before Criterion started releasing his films he was really considered a "trashy" exploitation filmmaker by a lot of critics. Some film snobs still wonder why Criterion is releasing Suzuki's movies, but I think he's brilliant.

Thanks for the response Kimberly...

I can understand people not enjoying Suzuki, but I'm always amazed when they completely miss his sense of fun. "Branded To Kill" puts a smile on my face every time I see it.

By the way, I love your Cinebeats blog. Your recent DVDs of 2006 pointed me towards "The Fifth Cord" which I quite liked (in particular because of Vittorio Storaro).

I agree that it was indeed a terrific choice and a wonderful review.

I love the way Suzuki walks unafraid in the ground of art and trash, able to occasionally please, occasionally alienate both audiences while making bold movies that are uniquely his own.

Thanks so much for the nice comments about my blog Bob! I'm glad I could help you discover The Fifth Cord since it's a really great film that deserves a wider audience.

I enjoyed discovering your blog and have just added your link to my blogroll so I can keep up with your posts.