Yamauchi Kazuhiko is a first time candidate for city council in Kawasaki Japan. He's eager, full of energy and willing to do just about anything to get across his party's message of government reform. His campaign consists of impassioned speeches via bullhorns to commuters, learning how to bow properly and having his wife take extended vacation from her job (their only source of income at the time). Oh, and he has to pay for all expenses out of his own pocket.

His experience navigating the traditions, processes and people of the Japanese political system are documented in "Campaign". As well, we get an additional look at pieces of Japanese society and culture via city scenes and the personal interactions. And as interesting as the campaign was, those additional scenes are my favourite part of the film. It's not a deep look at the society, but the glimpses of little children at play, the packing of passengers into the subway and Yamauchi's stops at different cultural events create a feeling of wanting to experience Japan directly. 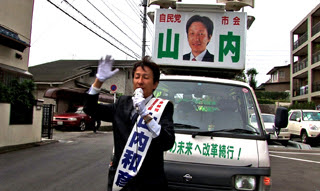 Unless of course you want to get into politics...Though there are a number of female politicians and candidates that we see in the film, the general environs seem to be strongly patriarchal. So much so, that when Yamauchi's wife joins the campaign trail, she must refer to herself as his housewife and not his wife. She's a strong, intelligent and independent woman - and it doesn't sit well with her.

But Yamauchi is willing to go along with the Liberal Democratic Party's rules. He bows and defers in all cases and really tries hard during speeches to show his political meddle. But he's not a politician. You can see him slowly wilt throughout the movie as he gives in to the party's standard approaches and campaign tactics. Tradition and hierarchy hold sway over just about everything. And that seems to hold for the other parties and candidates since they all follow the same techniques (somewhat limited by Japanese rules about using TV and other media for campaigning).

Although somewhat long at 2 hours, it's an excellent look at an entirely different political landscape than anything in North America. Not necessarily better or worse, but most definitely different.

What's the first thing you think about when someone says "Brazil"? Soccer? Beaches? Beautiful women? Beautiful women playing soccer on a beach? And likely every move choreographed to a Samba beat. With nudity.

This, at least, seems to be Hollywood and many other filmmakers' perception of Brazil. "The Foreign Eye" documents through interviews and clips from many films (many really bad films at that) how these stereotypes are reinforced over and over via movies. Looking for an "exotic" locale to set your story in or perhaps a getaway spot in which your character can lose themsleves in the free spirited locals? Apparently nothing beats Rio! 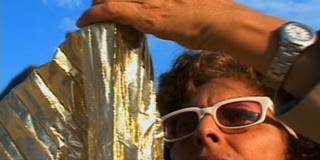 Director Lucia Murat uses her stature as a Brazilian filmmaker to get these interviews and confronts her subjects about their usage of these stereotypes. There's a broad range of reactions including denial, rationalization, embarassment and humour. The French directors in particular seem to have no regrets about their knowing usage of exaggerated generalizations to get across their intended settings and comedy. Hollywood folks tend to either address the issue with backpedaling or self-deprecating humour.

Speaking of humour, there is still much to laugh at in the film. Specifically the number of clips from the cheese-oid cluster of craptastic movies. More well known fare like "Blame it On Rio" and "Anaconda" are shown alongside lesser known titles like "Lambada". The audience laughter during the clips of the latter title indicate that perhaps I'm reading it wrong - nothing that generates that kind of joyous response can be all bad...Amongst all the drivel, though, there is one excellent film - Brad Anderson's "Next Stop Wonderland" is featured due to the appearance of a Brazilian "latin lover" type character (whose accent was apparently really awful). Apart from that, it's truly a well-constructed romantic comedy.

Adding to the generalizations from these movies, throughout the film we see random requests of different people for their thoughts on Brazil. Unsurprisingly, they tend to fall into the exact same stereotypes. But what is surprising is that Stanley Donen - director of "On The Town", "Singing' In The Rain" and "Charade" - also made "Blame It On Rio".

Now that's hard to rationalize.
Posted by Bob Turnbull at 00:38