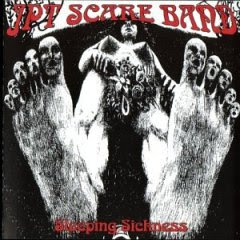 
Imagine you're in the Fillmore West around 1969 or so. Maybe Mountain is playing or some other bluesy stripped down band who likes long exploratory tunes with a certain amount of "wanking" on guitar (but controlled wanking over chord progressions that still sounds good). Might sound a whole lot like this. This CD is a compilation of their first 2 releases in the 90s (which were both on vinyl). JPT is an acronym of the first letters of the band members, but it's the only short thing about this release - 4 of the 7 tracks are over 12 minutes in length and 2 of the others around 7 minutes. That's a lot of glorious fuzz and wah wah feedback.


Barbara Stanwyck plays a happy homemaker type columnist who describes to her readers the idyllic farm life she and her family share (with old fashioned recipes, garden tips, etc.). Thing is, she's a single city girl living in an apartment. At Christmas time, her boss decides that she should host a war hero for the holidays and her secret is in danger of being exposed. Thus begins the screwball antics that lead to misunderstandings, confusion and an elaborate ruse. It's all quite silly, but it's deftly handled with some sharp writing and the antics aren't ever too over the top for me so they remain funny and quite endearing. And Stanwyck is as radiant as ever.


This movie actually made some people angry as they wanted more of the same after "Ocean's Eleven". That initial film (a remake of an old Rat Pack heist film from the 60s) was a whole lot of fun as a caper flick, but for me "Ocean's Twelve" was even better. It took the fun caper and added an art film around it by using different editing techniques (used in introductory segments for people and places), lots of flashbacks, subtle clues and spiffy camera tricks. Too much technique for some folks, but I love how they spent time on scenes just for the fun of it. The plot demands you really pay attention if you want to follow the twists and turns of the group's attempt to steal the Faberge Eggs. Outstanding cinematography (using light to terrific effect in many scenes) and a superb soundtrack puts this into my favourite films of the 00's so far. Hmmm, I think I need to watch this again tonight...


Takeshi Kitano is a Japanese Renaissance Man. He's a painter, author, poet, comedian, TV personality (in North America known for the redubbed "Most Extreme Elimination Challenge" or MXC on Spike TV), actor and director. He took on those last 2 roles in 1993's "Sonatine", where he plays a member of a yakuza gang who is getting tired of the life. He and his followers are sent to stop a gang war, but when things don't quite work out as planned, they retreat to a house by the sea. Much of the film is quite slow paced and almost playful in showing these gangsters bonding, killing time by the beach and playing tricks on each other. But the violence (depicted in brutal, quick and non-stylized terms) is never far away. 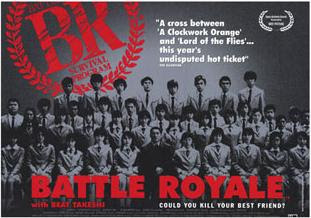 
Kitano reappears in this Japanese blockbuster directed by Kinji Fukasaku. Because of the breakdown of Japanese society in the fictional future of the film, the youth have turned to violence, school boycotts and other measures that have frustrated the government. To counter this, they choose one Grade 9 class every year to compete in the Battle Royale which is a fight to the death between the kids on a remote island. Only one can survive and there is no escape...Kitano plays the former teacher of the class who presides over the students as they run through all the possible reactions - denial, panic, banding together, becoming lone assassins, etc. Kitano also lends cynical encouragement to the students via loudspeakers on the island as he gives regular death toll results. If you can buy the concept, it's a terrific film.
Posted by Bob Turnbull at 12:44

I watched this movie on a plane to LA. You can imagine that I had the screen sheltered most of the time as I couldn't believe what I was seeing.

I purchased this movie on premise alone. I heard the plot and knew I had to have it. It did not disappoint either.

A bit more cartoony then I was expecting, but I think if it weren't it would have maybe creeped a bit too dark for me.