This year's target of the Focus On series at Hot Docs is Canadian filmmaker Kevin McMahon. With over half of his films tackling uniquely Canadian subjects and perspectives ("The Falls", "Cod: The Fish That Changed The World", "An Idea Of Canada", etc.) as well as not being widely known, he appears to be a great choice. 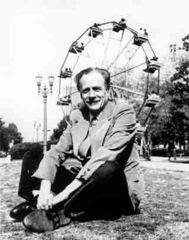 Another of these Canadian subjects is Marshall McLuhan - he of the pronouncements on media, communications and culture ("the medium is the message", etc.). Like most people, I had just a vague knowledge of McLuhan and his theories, so I was really hoping to get a better feel for his field of study and his contributions to it. So I had expectations going in...

As a director, McMahon's style has been described as a "poetical, lyrical approach to the essay film" and this seems to fit spot on. Though this same style works very well for another of McMahon's films - the broad topic of "Intelligence" that I saw a few days later (I never promised timely reviews...) - it just doesn't work as well here. At least not for what I was expecting.

There is some great footage of McLuhan speaking in interviews and lectures, but these short snippets just aren't enough to give you much of an idea of either the man or his views. Then again, that may not be possible - several interview subjects stated that they rarely actually knew what the hell McLuhan was saying. But he certainly drops enough interesting tidbits that keep you curious...

The film does actually try to set up a few frameworks to guide us through McLuhan's ideas. It opens by showing an animated take on Edgar Allan Poe's "Descent Into The Maelstrom" and returns to the central part of the story (a young fisherman whose boat is being pulled into a vortex) throughout the film. It also shows us his Laws of Media (the theory that all media and human artifacts do 4 things --> enhance, retrieve, reverse and obsolesce) and dives down into each of them. Everything else in the film is shoehorned into both of these frameworks and ends up making things harder to follow instead of clarifying any specific theme.

Again though, that's probably more my desire to hear McLuhan do more of his own speaking and to get more than just a surface idea of what he was trying to say. The film does throw out some interesting ideas and information from the interviews. One of the interview subjects states that McLuhan's many TV appearances - he much preferred to talk about his ideas than write them down - actually harmed not only his arguments but his overall standing within the field. As well, we learn that the sudden dissolution of his curriculum at the University of Toronto really hurt him in his later years. Perhaps it's just a very difficult proposition to pigeonhole McLuhan in any timeframe whatsoever. At least I've come away from the film with a greater sense of wanting to understand McLuhan.

The jury awards for Hot Docs have already been handed out and the Best International Feature was declared to be this film about the Chinese purchase of a German coke producing plant. Coke in this context is a solid carbonaceous material derived from destructive distillation of low-ash, low-sulfur bituminous coal. The film documents the dismantling of the facilities by Chinese workers with supervision by German engineers. The Chinese are to bring the skills they learn back home to build their own coke plant. 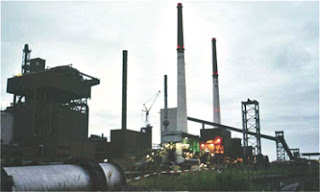 Of course, you can tell already that the film will be about more than just the specific transfer of a single plant...We begin by getting to know a few of the German engineers who seem to be resigned to the task at hand - tearing down their work environment of the past 8 years and handing it over. But there is also some resentment. Not only are they losing their jobs once the demolition is finished, but they are helping to speed that process by training those that are doing it.

The two cultures certainly clash along the way. There are condescending comments towards the Chinese by the engineers, but it really feels to be coming directly from radically different approaches to process and not any racial issues. The Germans are sticklers for details and safety. The Chinese just want to get the job done. In the early stages, the frustrated Germans continue to hammer home the proper steps for cautious work and mandate filling out safety forms. They opine that they won't be able to watch the work all the time because the Chinese will be working 7/24. Fed up at one point with the dangerous practice of tieing two ladders together, one engineer knocks down the only ladder up to the roof - stranding the workers currently up there. 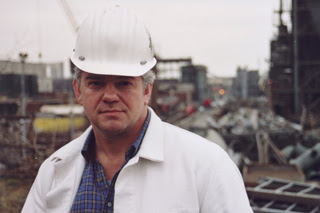 The Chinese aren't intimidated though. They've done this before and are more than happy to take the technology and skills back home and further refine the business. The plan is to rebuild this plant in China - and then build even more of them. They are equally confused at times with their hosts. They don't understand the need for regulations and the shorter working hours. They are, however, impressed with the respect for the environment...As one Chinese manager says, "If we had this many doves at one of our sites, by now they would all be killed, cooked and eaten". To this he adds a big hearty laugh.

Much of the middle of the film is focused almost entirely on the Chinese as we get to see what it's like to work extremely hard in long stretches and be that far from home. This leads to a few requisite scenes of calls home and shots of the Chinese workers sticking out in the German towns. One of the directors mentioned after the film that they didn't really get much footage of how the workers meshed with townspeople because it was pretty rare that it happened at all. Certainly none of the workers were encouraged to go exploring individually. 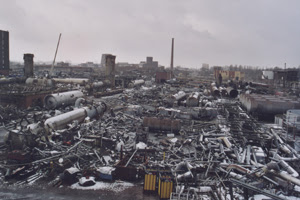 Another interesting part of the film is the plant itself. It's immense. And what a disaster that site is after the deconstruction has taken place. To think that this same plant, and more just like it, will pop up in China soon with their rapid growth makes you wonder about an environmental cost we may be paying up front (there was reference to environmental cleanup issues in the film, but we never actually find out if either side took the pains to get it done).

Although I ended up missing the interactions between the two cultures as the focus stayed with the workers, it's a film that works on several levels at once and remains entertaining and informative.
Posted by Bob Turnbull at 14:07