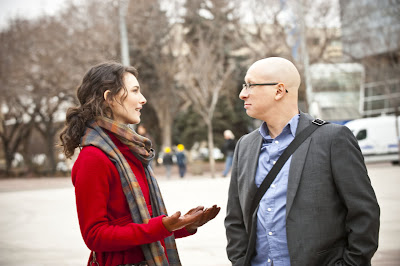 There's something to be said for "talking head" movies. When intelligent people discuss interesting or novel ideas in passionate ways, you don't necessarily need an overall story arc, narrative thrust or cinematic quality to the proceedings - smart people saying smart things can be engaging enough. Certainly none of those other elements would hurt, though, and the addition of them can lead to fascinating viewing. So I had my hopes up for Gary Burns and Jim Brown's latest film "The Future Is Now!". It purported to have a bevy of experts (in fields of architecture, art, evolutionary science, etc.) talking about what the future might have in store for us and how our lives might change. To do this, the film wraps the fictional story of a disconnected cynical man being shown what humanity might achieve as he gets to interview these thought leaders. I bought into this rather odd concept and the claims of "a cinematic voyage through endless future possibilities" partially due to the directors' previous film - the fun and very sharp "Radiant City" - which combined wonderfully staged interviews of urban planners with the story of a suburban family trying to cope with the many pros and cons of living in their neighbourhood. So I expected "The Future Is Now!" to be filled with smart people, clever structural devices and superb filmmaking.

Though I can't blame them for trying something different, the only thing that works are the actual talking heads - and only when they are allowed to go off on their own tangents and aren't forced into answering specific questions. Had they but only filmed these curious thinkers chatting to a single static camera, the film would've been far more thought-provoking. The artificiality of the construct that a Woman Of Tomorrow (a TV news reporter) is able to line up all these people to convince this one cynical guy (dubbed the Man Of Today) that the world has hope finally sinks the film. That's not to say it doesn't occasionally induce a certain amount of percolation of ideas in your brain: the architect Shigeru Ban does pro bono relief work that has far reaching benefits, the author Rivka Galchen briefly mentions the concept of parallel universes spawned every time a decision point is reached, Richard Dawkins sees genetics as "a branch of information technology" and even Jean-Paul Sartre (as the ghost of yesterday) chimes in to point out the logical fallacy of seeing oneself as completely different from everyone else. Whatever inspiration evolves from these moments is constantly undermined by the framing story and its unfortunate proclamations.

The film opens with several person on the street interviews about what their greatest fear is. Most are poorly acted and immediately dilute the desire to really pay attention to what's being said (except for the guy who was concerned about "mystery moisture" - one of the better potential conspiracy theories I've heard of late). The reporter comes across a man who claims not to have any fears because he doesn't think about it much and really has no hope for the future. He simply wants to live out his life without causing too many problems. She's never met anyone like him and convinces him to attend a poetry reading that night to engage with intellectual pursuit and new ideas. He agrees and is brought from one new person to another (though sometimes, like with Ban and Dawkins, the interviews were done with other people and his questions are spliced in). The reporter, as the Woman Of Tomorrow, feels she must convince this man that there is always a future ahead and it holds, if not something better, at least something interesting.

I can't argue with that concept and quite like Galchen's later position that we should "take ludicrous ideas somewhat seriously" if only to find the kernels or truth or beauty contained within them. An example of this is the poet's idea that he wants to write a poem that will be converted to a genetic code for a protein which in turn when created will trigger a new protein in response and therefore "the organism becomes the living embodiment of my poetry". Not much practical benefit, but an interesting nugget to sit back and ponder. It's moments like that which frustrate me most about the film though - it could've followed so many of these flights of fancy down their paths, but always stops short in order to get back to the reporter's job of convincing the central character of the good in humanity. The conversation flow between the two of them just never feels honest and tends to kill any momentum the film had built up. It culminates in some heavy handed preaching by her complete with cuts to school children at play. Does the future not contain any subtlety?

"I have to fight sometimes to keep steering my emotions to the positive" says the Woman Of Tomorrow in her final sermon. A pretty good summation of my feelings about the film. 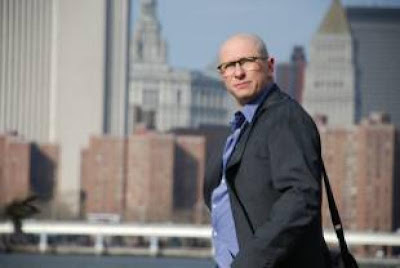