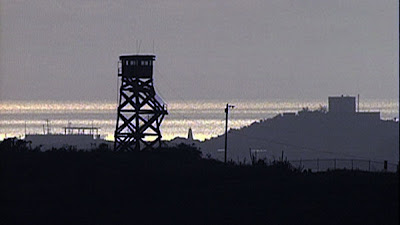 "The Guantanamo Trap" signals early on (with some rather poorly intoned narration) that it has a bias to it. Hell, it's title alone gives that away. Fortunately it's strength is that it mostly tucks that bias away when the people are talking - in particular, when the person who wrote the "torture memo" (the letter that suggested many "enhanced interrogation techniques" should be used at Guantanamo) lays out her views.

Not that you need to be completely even-handed when discussing torture, but it's quite fascinating to hear Diane Beaver (appointed legal advisor to the camp command at Guantanamo in early 2002) talk about why she wrote that initial memo and why she does not believe that any of those techniques bordered on torture (by what she terms as "any definition" of the word you'd care to name). The film itself is quite careful to never explicitly state that any of these methods are actually torture, but it's hard to escape that conclusion when you hear people who have experienced it talk to the camera about it.

Murat Kurnaz is first up. Kurnaz, a German-born Turkish National, was picked up in 2002 and eventually fed into Guantanamo as he was under suspicion of being part of the worldwide al-Qaida network. He was left, without charges, in Guantanamo and suffered through 25 hour long interrogations, no food for days at a time, humiliation and other such tactics for a period of 5 years. Turns out there was no shred of real evidence against him. Rumours and speculation plus being in the wrong place at the wrong time (a trip to Pakistan to immerse himself in Islam) sealed his fate. One of the German al-Qaida cells had apparently been a major part of 9/11, so when they heard things like Kurnaz had condoned the attacks (he was "said to have" anyway), had always wanted to fight and had bought a combat suit and boots, he was a prime target (much of that information was learned from his mother). His blank expressionless face as he describes his lengthy stay speaks volumes - he had essentially given up life while incarcerated. 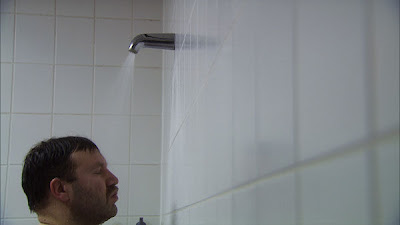 Michael Diaz was also at Guantanamo. In his case, they actually had him cold on his crime. He leaked the names of the prisoners at Guantanamo - information he knew because he was a judge advocate for the Navy and stationed at Guantanamo. His job at the facility was to ensure that another Abu Ghraib did not occur and that they treat the prisoners humanely. Clearly, he says, the people there were not the "worst of the worst" and that many were actually there because they were in the wrong place at the wrong time (including Kurnaz). He saw conditions he thought were wrong and against the law, but realized feeding it up the management chain would result in nothing. So, after seeing a plea from a human rights lawyer to find the names of these individuals, he decided to send them to her - he couldn't stand to see these conditions and knew this was his only chance to help. When this lawyer received the info, she turned it over to the military police...And thus Diaz was caught. Though he didn't go to Guantanamo, he served 6 months in jail and after being on the receiving end of similar tactics that were used at his old base, he realized that Guantanamo didn't invent these interrogation methods - they learned many of them directly from their country's own prisons.

And then there's the Spanish lawyer (Gonzalo Boye) who is trying to bring George W. Bush and Donald Rumsfeld to some form of justice. He believes that Kurnaz's testimony can help implicate Beaver who will then roll over on her bosses (in reality, not an insane plan - Beaver was indeed hung out to dry by her superiors). He has also done time in a jail where certain tactics were applied to him in order to coax out information. He spent almost 8 years in prison for a role in a terrorist kidnapping (which he denies) and was tortured by Spanish police. He's not the most trustworthy figure, seems to have his own personal agenda and doesn't even seem to notice the irony of bringing Kurnaz to a bullfight (the movie is not subtle about comparing Kurnaz to the bull being stabbed to death). His life, however, has been profoundly impacted by torture.

It's fascinating enough to listen to these people's accounts, but the film goes a step further by juxtaposing their comments with a set of interviews with Diane Beaver. Though she never seems to address any of the issues of innocent people being held in Guantanamo or how she can possibly consider the actual implementation of these interrogation techniques as not even being close to torture, she comes across as a truly honest and thoughtful person. She really feels that she did what she needed to do for her country - at the time there was concern over another imminent attack and that any details the prisoners had might be of use. Their standard line of questioning (plus sleep deprivation and solitude) wasn't as effective as they'd hoped, so the memo was created in order to provide her superiors with legal advice on what were acceptable (and much more "aggressive") methods. It was then out of her hands as to which methods they chose and how they actually implemented them (among the ones considered were: "positions of stress", use of individual phobias, removal of clothing and several other techniques), but she's positive that no one ever over-stepped their boundaries and that torture was not committed within the walls of Gitmo. She also seems pretty positive about the prisoners too - she views Kurnaz as a "bad guy" who was associated with some of the worst terrorists around. Wrong place at the wrong time? "That just doesn't wash" she says.

She's erudite, genuine and seems a pleasant sort, but there's additional back story to her life that certainly indicates a less than smooth journey for her. Her current struggles to get her own doggy daycare facility opened provide a complete picture of a woman determined to push through. There's little overt political talk in the film, but at one point she uses the old party talking point that the prisoners in Guantanamo received better health care than the citizens of the U.S. (her family members at her backyard BBQ nod and agree). That's an astounding statement coming from her...

The film shows you these 4 different people with widely different backgrounds who have all been, in one way or another, affected strongly by torture and possibly going through a variety of rationalizations for their actions in the past. Director Thomas Wallner is effective at using news reel and file footage of the camp as well as terrorist incidents (9/11 obviously, but also an astonishing moment captured during the terrorist bombings of trains in Madrid), but also captures some current day footage of these people's new surroundings (Diaz in Times Square, Beaver in her small community, Kurnaz riding is bike, Boye driving through Madrid, etc.) that opens the movie up and shows them trying to interact with the rest of the world.

It's a fascinating study of torture and its wide ranging effects. It never completely delves into black and white statements about the right and wrong of any of the characters' actions and thus becomes, even with its own biases, a healthy jumping off point for discussion.
Posted by Bob Turnbull at 22:47