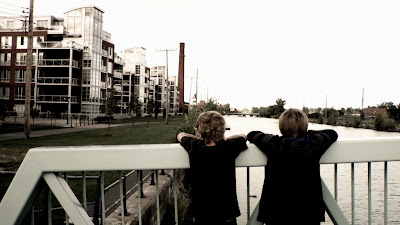 St-Henri The 26th Of August (2011 - Shannon Walsh) - As a kid growing up on the South Shore of Montreal, the only part of "the big city" I was familiar with was the downtown core which contained the big department stores. When I began attending post-secondary school in downtown Montreal, I used to get lifts into the city with my Dad and every day we would drive through the neighbourhood of St-Henri - an area that is surrounded by the Lachine Canal and expressways. I found it a fascinating and somewhat sad part of town - it seemed to be filled with huge abandoned factories (all with their windows smashed out), but had lovely bike paths along the canal and promises of condos, coffee shops and everything the young urban professional wanted. Watching Walsh's single day view of the area (filmed by 16 different filmmakers), I can see that certainly some of those promises were kept, but many more were broken. Cutting between several different subjects, the film gives us wide coverage of the spectrum of St-Henri - the nationalities, the age ranges, the working classes - and a feeling of what it might be like living in the community. It's not always pretty, but seeing so many slices in a mere 90 minutes (even though you never get a real strong attachment to any of the characters) reminded me how fascinating St-Henri was. The film is a tribute to the 1962 documentary (by Hubert Aquin) "St-Henri The 5th Of September". 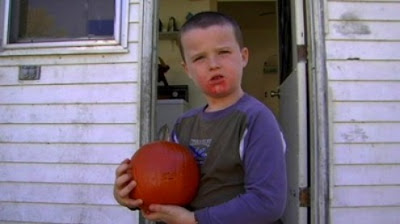 45365 (2009 - Bill Ross IV, Turner Ross) - Staying on a similar tack as the above, the Ross brothers 2009 film covers about a 7 month time span within the confines of the 45365 zip code in Ohio. The brothers hometown of Sydney is within that virtual border and may explain the access they had to some of these people's lives since it's just so very intimate at times. Though filmed over a much longer time period, it shares with "St-Henri" the desire to cover the breadth of its subject - from top to bottom. "45365" pulls off something remarkable though - fully fledged characters that surprise you, disappoint you and engage you while simply going about their lives. And it's all done with some absolutely gorgeous camerawork. Shots are artfully framed whenever possible and stunning cinematography is pulled off seemingly with little effort. A truly wonderful film and little surprise that Roger Ebert picked it for his Ebertfest this year.

Abendland (2011 - Nikolaus Geyrhalter) - And if you haven't had enough cinema verite focusing on specific environments and the people who live in them, "Abendland" takes things one step further. Covering far more ground (and with much less specific focus), Geyrhalter's film segues through different parts of Europe at night. Border patrols in Spain, Oktoberfest revelers, a massive crowd of rave dancers, a crematorium and an old folks home all roll across the screen in this mesmerizing and beautiful film that, even though it sometimes seems to flow from one random scene to another, gives a strong sense that Europe after dark is a lonely place and quite disconnected. Geyrhalter uses every inch of the screen to create his visuals and you can't help but feel that he had many of them in mind before he even shot them. Filmed over a couple of years, "Abendland" brings you to some places that you either never thought you would see or didn't even know existed. If its overall message isn't completely sharp, it'll leave you with memorable images and the feeling that you need to go have a conversation with someone and connect.
Posted by Bob Turnbull at 20:01