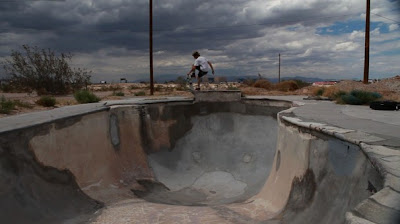 Dragonslayer (2011 - Tristan Patterson) - Winner of this year's Best International feature at Hot Docs, Patterson's debut feature is in many ways a simple film - it follows skateboarder Skreech through several weeks of skating, hanging out, travelling and living a hand to mouth existence. It's much more than that though. The well deserved accolades the film is receiving (Sundance had praise for it too) come from the way it tells its story, which uses a fractured timeline and slides effortlessly between lovely cinematography and hand-held shakiness, as well as the full picture it gives of Skreech's life. Broken down into 11 different sections (each numbered), we follow the skatepunk through various empty backyard pools in California to numerous minor skateboard contests on the West Coast and all the way to Denmark while occasionally side stepping to spend time with his baby son, his new girlfriend and a lot of alcohol and weed. He's not the most sympathetic of main characters, but is still somewhat charming at times and you can't help but hope he finds his way. The sections focusing on Skreech and his girlfriend sometimes have a bit of a feel of a low-budget Indie film (though a well executed and shot one) and if they managed to capture and frame these shots "on the fly", it really is a remarkable achievement. The craft of the film really accentuates what must be a blurry day to day existence. 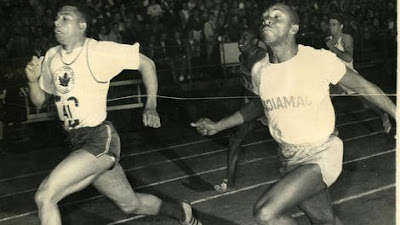 Mighty Jerome (2010 - Charles Officer) - Using a completely different set of aesthetic and story-telling choices (black and white cinematography, news footage, recreations, etc.), "Mighty Jerome" is equally as good as the prize winning "Dragonslayer" at conveying a sense of the life of its subject. In this case it's Harry Jerome, a Canadian track and field star from the 60s who held world records in the sprint and was a flawed yet fascinating individual. Though setting his first world record at 19, he seemed to battle negative press for the entirety of his career (even when he had suffered major injuries and staged an amazing comeback). He also ran into a variety of racism while at school in the U.S. and also back home in his native Canada (as the film points out, the more polite racism of Canada - ie. typically not as overt as what Jerome encountered south of the border - was sometimes much worse). The film meshes present day interviews with recreated scenes from his childhood and young adult life (when he met and wooed his caucasian wife) and loads of archival competition and interview footage. By keeping the B&W look to the entire film, Officer not only maintains a consistency across the narrative, but creates a superb looking documentary about a man who was certainly more than a sports hero (his name lives on in the form of awards and scholarships for outstanding black Canadian youth). 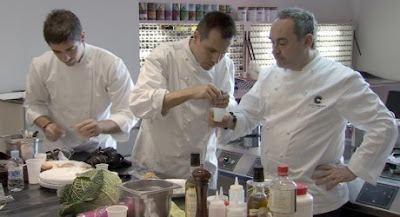 El Bulli: Cooking In Progress (2010 - Gereon Wetzel) - Ferran Adria is a controversial world-renowned chef known for creating odd combinations of foods and "deconstructing" the art of cooking. His famous restaurant "El Bulli" (a 5 time winner of Restaurant Magazine's best restaurant in the world award) provides more than just a meal to its patrons (who have to wait literally years for a booking), but a sensory experience. It's about more than just the taste, but the feel, the texture, the smell and the presentation. The film follows Adria and his chefs during one season, starting at the point when they have closed their restaurant for several months while they move everything into their lab. They spend months breaking down individual food items and combining them together to derive new sensations. After the experimenting comes the difficult task of building a new menu - a set of over 30 individual dishes that link from one to the other to provide the full journey. There are some great moments captured (particularly later in the film as they prepare for the opening night), but due to the numerous paths their experiments take them down, I would have preferred either some narration or separate interview segments to give us a fuller story of what they were attempting, what worked and what failed. I hate to ask for a conventional film to document a very unconventional chef and method of cooking, but since I actually wanted to know more about the subject itself, I needed something a bit different than straight observational documenting.
Posted by Bob Turnbull at 14:04