I'm running behind on my Hot Docs coverage...Considering they just announced the Award winners today, I'm going to try to catch up with some smaller capsule reviews of many of the films I've crammed in so far. 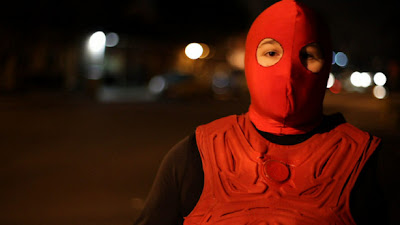 Superheroes (2011 - Michael Barnett) - The regular average-joe playing at superhero is a bit past its freshness date as a central plot point in fictional film at this point (four films in the past year or so made use of it), but what about in documentaries? You knew there had to be a few "crazies" running around in the dark with their homemade capes, so a feature length film about them sounds like a blast right? Well, yes and no. Barnett's "Superheroes" is at times a fascinating look at a good 20-30 different people who patrol their streets (almost always in a costume with a mask) from all over North America and can be a great deal of fun as we see the different approaches to crime fighting, weapon choices and costume design. It's more than just tinged with sadness, though, as we hear some of these people's back stories and find out why they feel compelled to help protect their neighbourhoods. I found there to be a few too many stories to get completely wrapped up in the individual characters, but there's enough in the film to still penetrate the most robust of defenses. Also, who knew that even superheroes weren't beyond the occasional bit of entrapment? 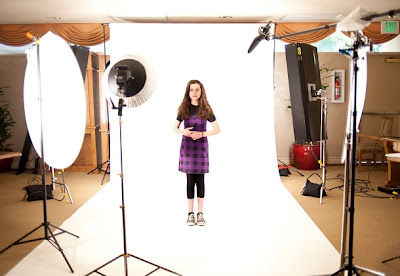 Hollywood Complex (2010 - Dylan Nelson, Dan Sturman) - No matter how often I have to remind myself that I shouldn't judge other parents in how they choose to raise their own children, occasionally I just can't help it. And "The Hollywood Complex" - which covers the better part of 8 months in an apartment complex for families looking to break their children into television stardom - had me handing down sentences like Judge Judy trying to clear the docket on a Friday afternoon. In many cases, one of the parents stays with the child in a small apartment for the entire period of "pilot season" (when the networks are looking to cast their new shows and regularly look for new faces) while the other stays far away at home. In one somewhat upsetting case, the mother and daughter had been living at the complex for 3 full years (not even going back home to the rest of their family during the summer months) hitting auditions, casting calls and the like - with nary a job to show for it. The film provides some interesting behind the scenes looks at the process, the different types of coaching and training the kids get and a diverse set of opinions by professionals. The most galling are the rah-rah coaches who feed the kids and parents' heads with dreams of fame and fortune when in reality the business is rather unforgiving. There's not a great deal special in the way the film is shot, but it does what it needs to do. The unfortunate thing is that films of this type really need their central characters to be not just people you root for, but ones you feel a connection to in some way. For the most part, all I felt was frustration and even disgust. 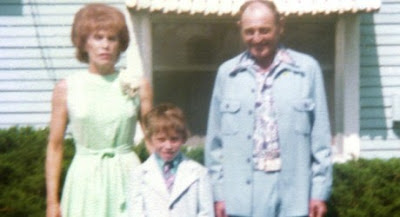 Open Secret (2011 - Steve Licktieg) - Director Licktieg turns the camera on himself and his family to tell the story of his upbringing and a little secret about his parents. Can you really call it a secret, though, when everyone knows it? Everyone except Licktieg that is - until his teenage years, he assumed his parents were his parents and he just happened to have been one of those "ooops" babies who popped out years after the couple thought they were finished having kids (hence the slew of much older siblings). Not only did Lickteig discover he was adopted, but that his real mother had been with him the whole time in the form of his "sister". There's some fascinating material to work with here - his real mother was more interested in getting away from the family than really helping raise her son while his grandmother was a controlling and cold caregiver - but unfortunately Licktieg is too close to the subject and as a first time filmmaker (coming from his job at NPR public radio), he never really explores some fundamental questions and occasionally drops into self-pity. It must be difficult to try to rebuild your own idea of who you are and I give him credit for attempting to use the film in that capacity, but "Open Secret" ultimately fails to provide much mystery, answers or sympathy.
Posted by Bob Turnbull at 20:42