While perusing NetFlix the other day, I scrolled passed Roman Polanski's The Ninth Gate and then backed up to bring it into view again. I don't know if it was the urge to start diving into Polanski's, uh, middle years (I hadn't seen any of his films between The Tenant and Ghost Writer - a gap of about 35 years) or simply to see Johnny Depp without scads of makeup and CGI, but I decided to dive right into it.

A good decision as its a pretty fine thriller and was exactly what I was looking for that evening. The following day I stopped by my fave local video store Videoflicks (yes, I still frequent actual physical video stores) to catch up on some titles missed in theatres. I came home with Dragon, Dead Man Down and Robot & Frank. The last of those was my most anticipated since I liked the concept and had heard strong reviews. Turns out it was pretty damn good with Frank Langella giving an outstanding performance as a thief whose memory is slowly fading. He gets some healthcare assistance from a robot and turns it into his partner in crime.

Langella being in both films back to back was a great happenstance, but it was a bigger coincidence that caught my attention...

In Polanski's film, we learn early on what kind of man Johnny Depp's book dealer is as he undervalues a rare 4 volume set of "Don Quixote" and buys it. He walks away with an incredibly valuable tome for a pittance. 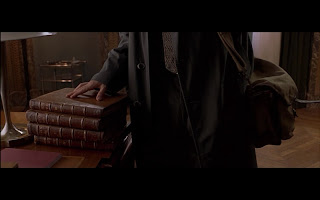 In Jake Schreier's Robot & Frank, Langella's old timer is an avid reader who loves to acquire armfuls of books at a time from the local library (though it's hard to say if the fact that Susan Sarandon also happens to work there actually trumps his desire for new things to read). On one visit, as he worries that the books are being replaced by new technologies, she shows him one of the building's most prized possessions. She unlocks a small glass encased box and pulls out a rare and incredibly valuable copy of..."Don Quixote". 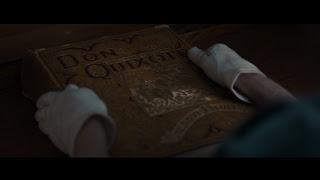 Coincidences should be expected, but it's still pretty satisfying when you find them. Think I'll go rewatch Lost In La Mancha now...
Posted by Bob Turnbull at 22:45

Email ThisBlogThis!Share to TwitterShare to FacebookShare to Pinterest
Labels: Coincidences