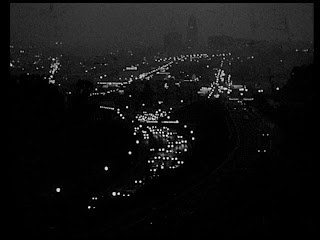 The score begins - like many typical crime/noir films - with blaring horns signifying caution and trouble ahead, but it doubles as the cacophonous soundtrack of the nighttime drive on the freeways of L.A. that we see on screen. And suddenly - ahem, without warning - the title card whooshes into full view... While the rest of the standard credits roll, the score shifts to a slower pace and adds some sultry sax to the mix (likely indicative of the parts the blonde ladies on the DVD menus will play), but then - remembering that mysteries will be popping up - shifts again into the deeper sounding horns that bring a rhythmic "bum-bum-bum". We immediately get the feeling this will be a fast paced movie (especially since it clocks in at 77 minutes). Fading out, we get two final blares during producer and director credits - just to remind us that danger lurks around the next title...

And bang - there it is: a Motel sign, a view outside a room and a narrator telling of random vicious crimes done for no reason (all done with that classic noir voice over style). The light in the room clicks off and we cut to a male figure cradling a knife in none-to-subtle a fashion. The shot is full-on Noir with a capital 'N': viewed from low down with shadows coming from all angles. He runs off leaving the radio blaring and the hotel manager comes to see what the ruckus is about. After not getting any response to keep the noise down, he enters the room while the scene fades out. The music cuts out shortly after we've gone black and then there's the shortest of pauses before we jump to a dead woman's close-up face upside down on the bed. 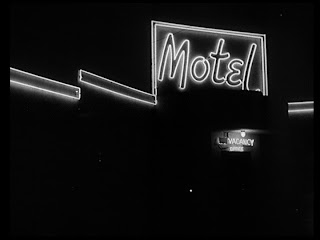 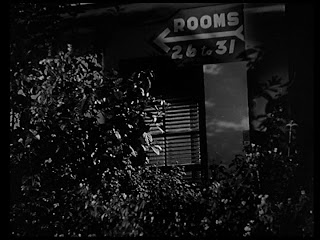 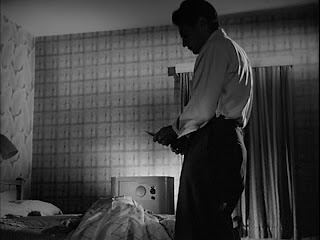 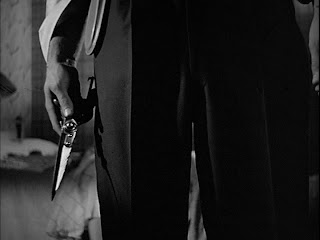 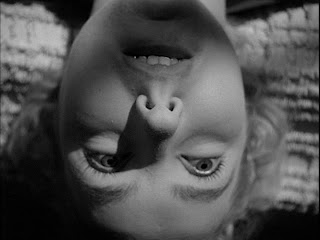 A fantastic quick set-up to the film - particularly that last bit that drops the music out to silence before jumping to the corpse. There's no need to show the manager or the complaining guest's reactions to discovering the body - the silence and sudden appearance of her face in the frame (unexpectedly rotated 180 degrees) gives us all the info we need about what happened after the body was found. The movie wants to jump right into its story and I'm right along with it.

The film actually becomes more of a crime/police procedural (as the narrator talks about the sweat of tracking down clues that lead to dead ends), but uses much of the noir style and stays effective until it peters out a bit in the last 15 minutes (some coincidental timing and an ending that should've been more satisfying). But no matter, my initial instincts were right. Sometimes, out of nowhere and without notification, you just know a movie's gonna be good.
Posted by Bob Turnbull at 23:45

Email ThisBlogThis!Share to TwitterShare to FacebookShare to Pinterest
Labels: Two Minutes In