Love At The Twilight Motel 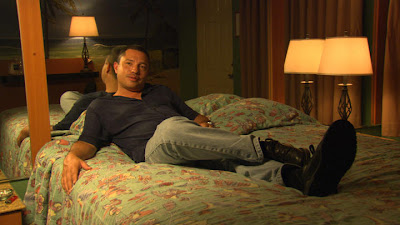 Alison Rose's "Love At The Twilight Motel" was initially pitched as being about the 20 motels on 8th street in Miami that set their rates based on hourly occupancy. One can easily envision a rogue's gallery of characters and bizarre situations to be found at these motels that might provide a glimpse into the vast depravity of humankind. Instead, we get seven very intimate stories from seven different patrons of these establishments - all of whom are indeed missing something in their lives. If perhaps they don't realistically believe they will find love at the motel, every single one of their stories touches on lost loves, hopes for love and love betrayed.

The people are without a doubt the focus of the film, but the motels themselves are worth a few words as well. They aren't the cockroach infested pits you might have in mind, but come across as extremely clean, freshly painted and quite lovely. They have private garages and back entrances, but otherwise look like reasonably nice places to stay - as long as you don't need a suitcase stand and don't mind mirrors on all sides. If you're looking for a last minute room, though, avoid trying to check in between noon and 2PM on a weekday. During this peak time, according to one of the motel's guests, many office workers in Miami go to these rooms instead of restaurants. Apparently they are used to dealing with their hunger pangs and look to satisfy other urges. For all that client traffic, though, you rarely see anyone but the cleaning staff use the outdoor hallways that connect the front doors of all the rooms.

The whole film looks gorgeous and is beautifully composed. As the camera occasionally roams those outdoor hallways, the parking lots and even Miami itself, you get a feel for the rich colours of the distinctly Cuban environment. On the inside, those ever present mirrors help make the cramped rooms feel much bigger than they really are, but also allow the characters to be shot from several angles so that we can see all the sides of their double lives. The visuals stay dynamic by occasionally showing only portions of their faces or having audio out of sync with what's on screen. This only further highlights the duality of their lives. The editing pieces their stories together wonderfully - allowing for long unbroken explanations and well-timed revelations that keeps us involved with all seven characters. Not that these filmic devices are really needed - these people are fascinating all by themselves. Sure they all have problems and I wouldn't want to be in any of their shoes, but they are smart, engaging, well-spoken and simply natural born story-tellers. They touch upon numerous common themes across their stories: the need to fill the voids in their lives, definitions of fidelity, absent or abusive parents, the effect drugs had on the paths they chose, etc.

One of my favourite people in the film is Gigi, a 46 year old escort who is by her own admission slightly heavier than she used to be. Though pessimistic about sex and her opportunities for finding respect and romance, she still clings to some hope. Her tales of the treatment she received from her father are sad and heartbreaking - particularly when she talks about the mental abuse she suffered from her father. Though still a virgin at 23, he called her a whore and accused her of all kinds of immoral behaviour so much that she eventually just decided to start dressing and acting the part. She reached the point of wishing she would be found murdered in a sleazy hotel room just so that he could see where he had pushed her. She also relates one of the more darkly funny anecdotes of the film regarding a suicide attempt gone awry. It results in a 911 operator asking "You tried to commit suicide by shooting yourself in the foot?". Of course, Gigi tells it a whole lot better...

There's also Rose, a beautiful young woman from Haiti who seemed to be on track during her early high school days. She was studying in an enriched program, but never felt like she belonged to the group and eventually fell in with the wrong crowd simply because she was accepted by them. As if to underline that point, she describes how she did ecstasy the first time at the urging of her boyfriend: "I was scared and I thought I might die, but I didn't want him to stop being my boyfriend". After a falling out at home, she struck out on her own at 14. Her current job is being a "connector" (attaching people to others that can help them score drugs or sex) and is hoping this may provide her enough distance from her previous issues so that she can get her children back.

Mr. B is, by all accounts, a total jackass. He claims to love his wife more than life itself, but will have sex with pretty much anything that moves ("man was not made to be monogamous"). He's a rationalizer's rationalizer. He also happens to be a heroin addict (another of the activities he engages in only at the motel), but considers himself a "functional junkie". Touching again on the dual lives these people lead, he believes that "man has two faces, one outside the home and one inside". And yet, he fully recognizes and admits all his double standards, regrets choices he made and knows the consequences of being caught.

I haven't even mentioned Richard the Cuban refugee massage giver who adores married women or Sara the small town Christian-raised swinger. All the characters have equally compelling stories with many sad moments as they search for something that will fulfill them. "We're not talking about love here" says Gigi about her encounters at the motel. True enough about her typical business, but love is indeed very much at the root of every single one of these stories. 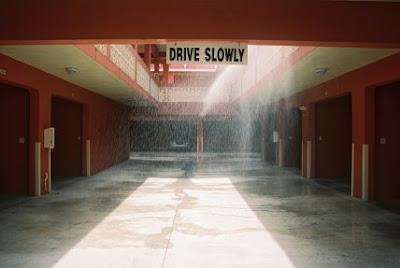 Email ThisBlogThis!Share to TwitterShare to FacebookShare to Pinterest
Labels: HotDocs2009

I just finished watching this. I was on the verge of tears when the update said Gigi had left the escort business and was with a man who loved and respected her - I was so happy that she'd gotten herself out of the destructive cycle. The entire time I just wanted to give her a hug, tell her how beautiful she was and assure her everything would be ok (if only such a thing could be a guarantee).
What a moving documentary...
Romany
xx

Excellent! I'm glad to hear that Romany! Yeah, Gigi's story is one of the more emotional, but they are all quite amazing.

I hope more people manage to see the film...