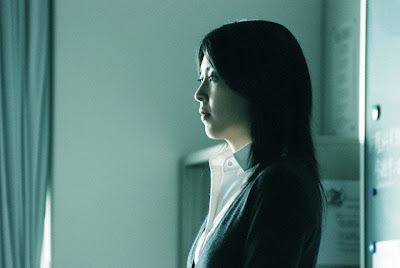 A lot of people are going to have problems with Japan's submission to the 2011 Foreign Film Oscar race. I know I do. There are levels of cynicism, cruelty and exploitation that run very deep. And yet, if I'm being totally honest with myself, the film grabbed my attention from the start and kept my level of engagement in it as it went along. Its style and pacing are remarkable - in particular the opening 30 minutes, which consists almost entirely of junior high teacher Yuko Moriguchi's monologue to her class. The oppressive greyness of the classroom, the timely short flashbacks and the non-stop barely audible pulsing soundtrack all work toward making the entire sequence riveting. By the end of Ms. Moriguchi's half hour tale of her daughter's death at the hands of two of her students, you feel completely drained. It's at this point that the rest of the confessions begin and I still haven't yet figured out whether or not it should have simply ended here and remained a perfect short film.

Yuko's class is filled with self-involved and very cruel 12-13 year-old kids. They jump at any chance to make fun of a classmate, show no respect for their elders and love to make huge assumptions about others that they quickly turn into fact. As she informs these kids, on this last day of term, that she is leaving the school they barely pay her the slightest bit of attention, except perhaps for a brief celebratory cheer. Until, of course, she begins to make the accusations. As she winds through her thought processes and sleuthing work, she claims that students A and B were responsible (she doesn't reveal the names right away to the class) - one for the initial act that was intended to cause the harm and the other for unwittingly actually finishing the job when he tried to cover things up. As it becomes obvious to the class who students A and B are, the audience reaches an inescapable conclusion: the entire class of kids is really screwed up. Not just because they're rude and selfish, but because they don't appear to have any capacity to care for others. Yuko wonders if they can actually appreciate the preciousness of life at all. As the film shifts from Yuko's monologue and initial revenge to the individual confessions of the others, it seems to state that they can't. 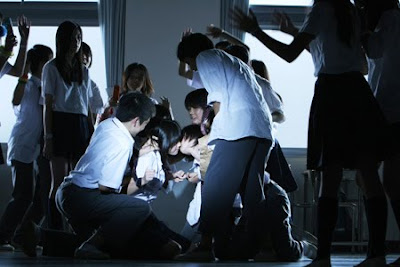 "No one taught me not to murder" says student A. There's no shortage of blame being tossed about with parents, teachers and the entire education system receiving their fare share. After awhile, though, as the different confessional stories start overlapping and the cruelty runs deeper and deeper, it hardly seems to matter. Is the film trying to make a case for proper education of young people or is it simply looking to entertain via shock and titillation? The longer the film runs, the fuzzier the distinction gets - particularly given the spectacular style used to deliver the twists and turns. There's loads of slow motion (the beautiful over-cranked smooth variety, not the choppy kind) that's effective in heightening the drama of certain events and there's wall-to-wall music that stops only occasionally to highlight a statement from one of the characters before starting up again. It's frankly a bit odd to hear Radiohead during some of the scenes, but otherwise the soundtrack does its job well.

Yuko's plan for revenge slowly unfurls itself as she uses the children to do her dirty work by provoking them and trusting in their ability to be vicious to each other. The movie has been a box office champ in its home country and it's likely that these kid versus kid scenes have been its biggest selling point. There's little genuine emotion in any of the scenes since the characters either speak in completely dispassionate voices or scream and yell at the top of their lungs. It's all a bit wearing and, in my opinion, terribly cynical. Yuko laments that these kids can commit murder with no fear of reprisal since the juvenile offenders act will protect them. Her replacement teacher has a completely opposite style of teaching (he wants to be friends with the kids, tries to be funny and asks them to bring him their problems), but he is respected and liked even less than she was. By the end of Yuko's plan, it doesn't appear that any of the kids have learned anything. There aren't any winners in this universe. As depressing as that sounds, its slick presentation and unrelenting pace make it never less than completely involving and, yes I confess, entertaining.