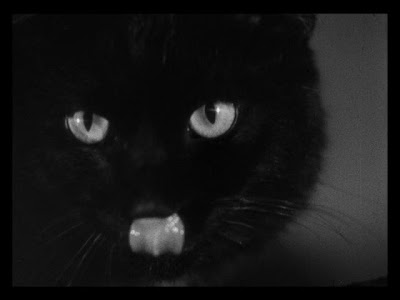 I'm licking my chops to get at this next set...

Tales From The Darkside (1990 - John Harrison) - By whatever name this film is known (it's also been called "Creepshow 3" internationally), it still follows the standard conventions of the horror anthology film: a single wraparound story allows for several disparate short tales (20 - 30 minutes each) to be told. Pros and cons abound with this approach of course, but the high watermark for me has always been the Amicus films from the late 60s and early 70s which perfected the style (for the horror genre anyway) with titles such as "The House That Dripped Blood" and "Tales From The Crypt". The law of diminishing returns seems to hold if you consider this one to be the third Creepshow entry - the first wasn't perfect, but had some very entertaining stories and a few fun "scares". The second left the inspiration behind, but still zipped it's way through it's three stories. With this edition from 1990, none of its three segments are out and out bad, but each fails to really pay off. The first is probably the best - a Mummy inflicts the same procedures done on it on others - and has the biggest name stars (Christian Slater, Steve Buscemi and a very early role for Julianne Moore), but it doesn't really have anywhere to go once it completes its first couple of kills. Still, it's well directed with some solid moments. The second (starring David Johansen) is far less effective as we watch a hit man get contracted to kill a cat. The last is really only interesting on two fronts. The first being that it is essentially a remake of "The Woman In The Snow" - my favourite of the four stories from the classic Japanese film "Kwaidan" - though it doesn't attempt to mimic the gorgeous and surreal look of the original. The second is that it provides some fine creature effects. Otherwise it was deadly dull (granted, as soon as I realized it was a remake I knew exactly where the story was going, but that's still no excuse for being dull). The less said about the wraparound story with Debbie Harry, the better. 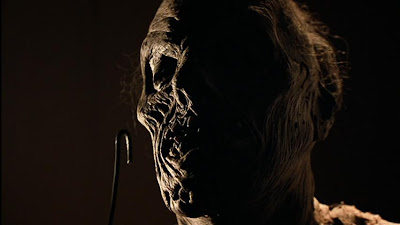 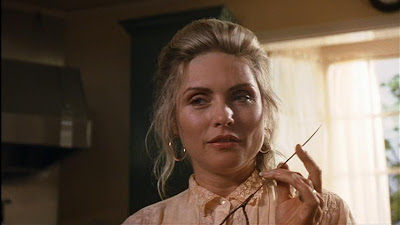 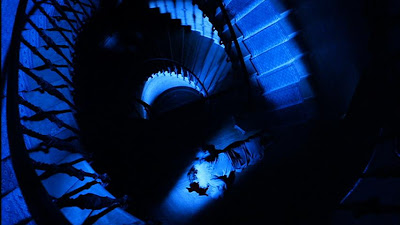 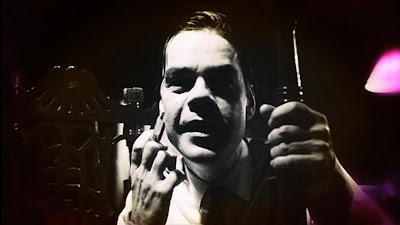 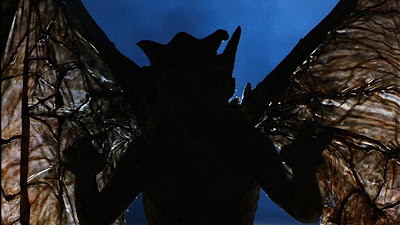 In Dreams (1999 - Neil Jordan) - Neil Jordan tries his hand at the horror-dream film with this story of a woman who is haunted by dreams of children underwater. The true horror of these visions shows itself when she realizes that she is somehow linked with a serial child murderer and that her own young daughter may be at risk. Though the film boasts a solid cast - Annette Bening, Robert Downey Jr., Aidan Quinn and Stephen Rea - the acting is its biggest issue. Particularly the performances of Bening and Downey Jr. who both obviously try too hard. They don't necessarily have to come across as "being natural", but I shouldn't be pulled out of their scenes as I notice them "act". Having said that, the movie has many solid things going for it: the cinematography (especially underwater) is wonderful, the story (though slightly convoluted) is both surprising and engaging and the horror isn't thrust upon you in undeserved jump scares (which I admit I assumed would be the case). The frightening moments in the story are when you think about what just happened and you put yourself in the character's shoes. 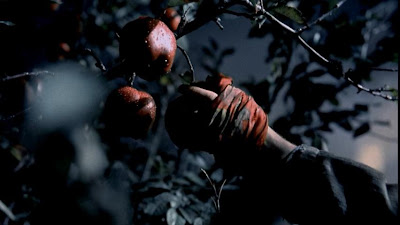 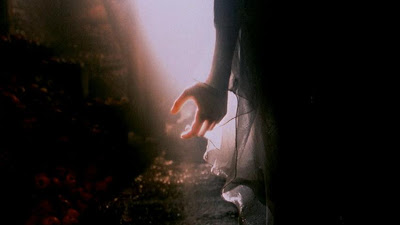 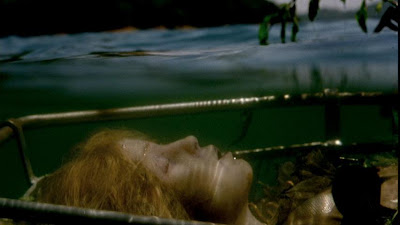 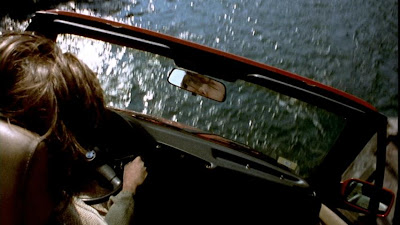 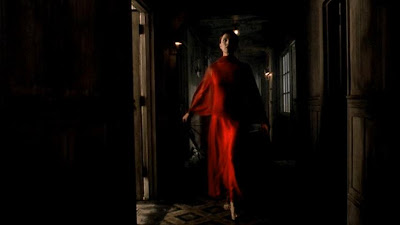 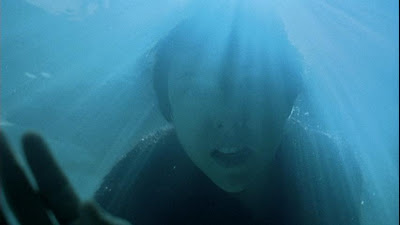 Mill Of The Stone Women (1960 - Giorgio Ferroni) - This Italian film is much more Hammer gothic than Giallo (which, given its 1960 date, makes a whole lot of sense). Though it borrows heavily on Italian set design and use of colour to light tense scenes filled with anticipation, the pace and story are much closer to how the great British studio would have handled this material. The story is set around a windmill in which sits an old carousel of mannequin women who rotate around the stage whenever the wind blows and the mill's arms turn. The women appear to be models of famous women throughout history who were killed (Joan Of Arc, etc.). A young writer is hired to pen a story about the 100th anniversary of the mill and while there he meets the very ill daughter of the caretaker. She suffers from a disease that may cause her to expire almost instantaneously with any imposed stress and so she remains in the mill with her personal doctor. The young man feels that something is not right, but then wonders if he is losing his mind when he witnesses the daughter die and sees her alive and kicking again the very next day. It's a slowly paced movie that creates its mood around the mill itself. Slow camera dollys, ominous creaks and the nighttime hues all chip in to make the mill become an additional character in the film. The broad acting and overdubbed dialogue might be difficult for some to handle, but the film proves rewarding if you have the patience. 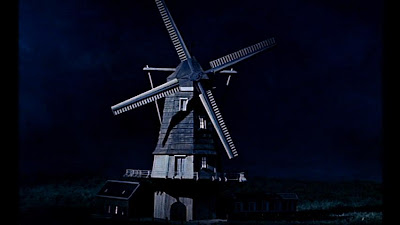 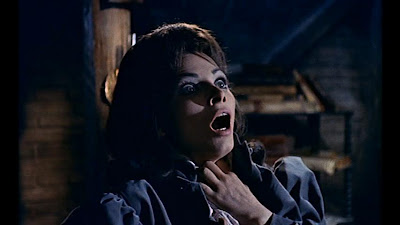 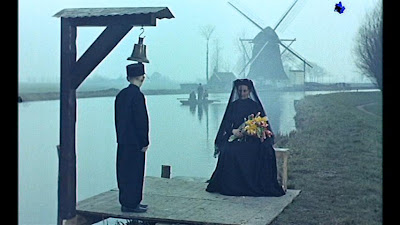 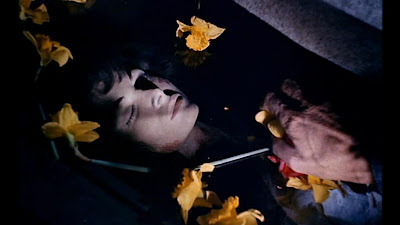 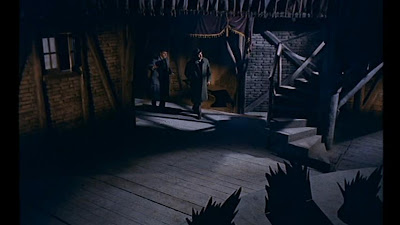 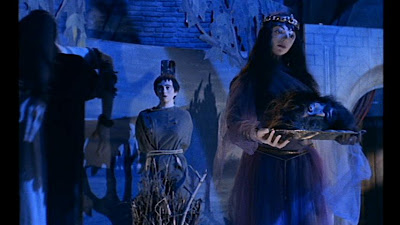 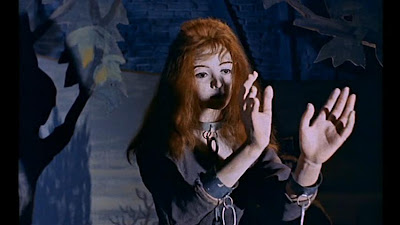 The Black Cat (1941 - Albert S. Rogell) - The second of two "The Black Cat" films that feature Bela Lugosi, this 1941 feature is a mix of comedy and haunted house similar to something like "The Old Dark House". It's a bit broader in some of its funny business (some of which is far too forced from star Broderick Crawford), but is definitely memorable for the creaks and moans the house provides, several key scenes and a great finale. I've owned the movie for well over a year (as part of the Universal Horror: Classic Movie Archive 2 disc set of 5 films), but assumed it was the earlier Black Cat film that I had seen and so put it aside for later. Fortunately there was discussion about it at both Cinema Styles and the great Arbogast's blog (if you aren't following Arbogast's 31 Screams feature throughout October, you are frittering your life away), so I dug it up. Despite some misgivings about the style of comedy, I'm still very glad I did. 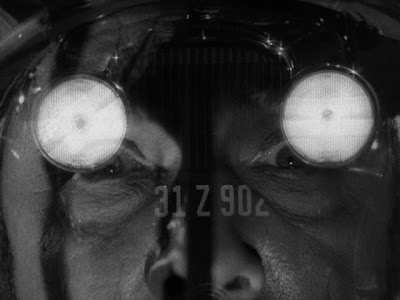 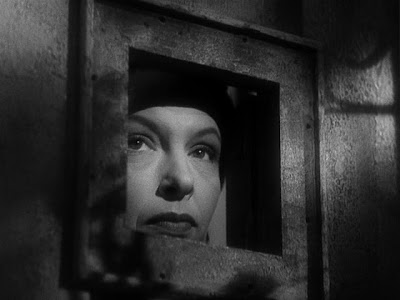 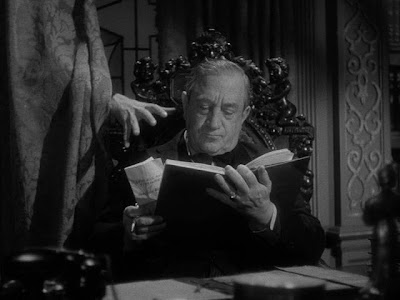 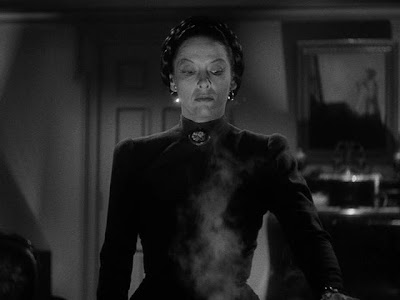 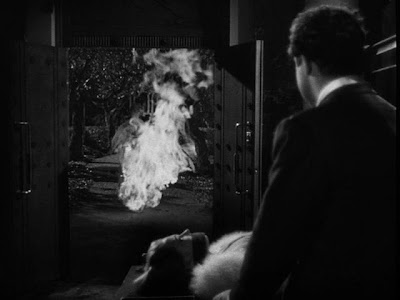