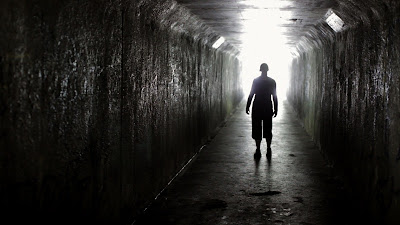 If there was one piece of hype that was circulating during this year's Toronto After Dark festival, it was that the relatively low-budget horror film "Absentia" would shake us all, was easily the scariest thing we would see all week, possibly all year and that we should prepare ourselves...And if there was one thing that the crowd (at least those that I talked to afterwards) mostly agreed on after seeing the film was that the hype had improperly set everyone's expectations. The film didn't actually scare the pants off anyone or make them jump out of their seats to the rafters as advertised (except for one early scare that was executed brilliantly and made several people actually cry out). However, it did end up being the kind of real horror movie that lets its concepts sit and stew with you and provide fodder for the deep dark corners of your mind to pick up and play with when you aren't paying attention. This applies not only to the specific horror on screen but to a larger thematic look at the idea of being abandoned. So though there was a great deal of consensus that the film wasn't as outright scary as expected, there also seemed to be almost as much agreement that it was an excellent dramatic depiction of deeply felt horror.

The title comes from the decision to call someone dead after they have been "in absentia" for a period of time. Essentially, if after 7 years (in this case) a missing person hasn't shown up anywhere and it's just like they dropped off the face of the Earth, then they can be declared legally dead. The film opens as Tricia struggles with just such a decision so she can close the final chapter of her husband's own disappearance 7 years ago. Her younger sister Callie has come to visit in order to help her with the final "death in absentia" paperwork and some packing before she moves out of the house to start a new life. Considering Tricia is pregnant, she should really be ready to move on, but the final submission of the papers and acceptance of her husband's death (even if their marriage wasn't completely successful) is a big step. So big, in fact, that she begins to see a ghostly version of him at almost every turn - his hollowed out eye sockets still fixing on her in an accusatory manner. Are these simple manifestations of her attempts at closure or is his spirit really trying to break through back to her? The answer might lie in a nearby walkway tunnel that seems to be a focal point for several disappearances. 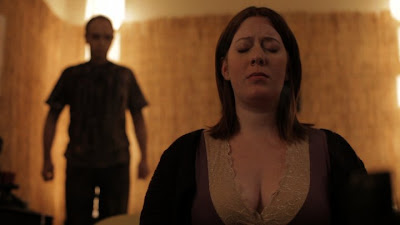 This initial section provides the majority of the film's spookiness via these apparitions and it leaves the viewer in a distinct state of tension as Tricia waits for the final death certificate and packs up the house. As mentioned above, one particular moment delivered a solid jolt to the audience - but not simply as a loud jump scare. After several of the apparitions had already built up a level of dread, one particular reveal gave a solid punch to the gut due to both surprise and a deep concern for the character. The crowd's reaction of laughter afterwards was a mix of release as well as a group admittance that "they got us" and it's one of the great things about watching horror with a packed audience. If you build up to those moments via character and tension, you can pull the audience even further into the story. This is why the crowd stayed involved with the film even though it eventually moved away from the spooky apparitions and focused the horror on things both more personal and more concrete. Particularly after a specific event happens that throws Tricia's life into turmoil yet again.

Tricia and Callie talk about the main theme of the movie in several scenes and from different angles - not just from the point of view of being abandoned by someone, but also feeling the temptation to just walk away from a situation yourself. In other words: to leave it all behind, drop your problems and abandon the people currently in your life that feel like a burden. Callie left home as a teenager and has roamed from one location to another getting into trouble and falling into drugs (yet another form of escape). She has found religion, but even it isn't always there to help her. Tricia takes a more buddhist slant and meditates to calm herself and prevent her own desire to flee. The different ways that the film brings in the characters' feelings of abandonment and their desire to do the same to others is its main strength. How horrific would it be to lose your spouse without knowing why? Or even worse, your child? And how crushing would it be if there was hope they had returned only for it to be quashed yet again? It becomes easy to sympathize with the desire to pack it all in yourself at those points. It's made even easier in this case due to the very strong performances by Courtney Bell and Katie Parker in the lead roles. They interact wonderfully well together whether it's love life discussions or nasty fights. They make the characters wholly believable and so when they are in jeopardy (real or imagined), you easily slip into their shoes with them. When a horror film can do this, it removes the necessity for the big special effect or the crashing scare. As evidence, two particular scenes had the crowd curling up in their seats just a little bit more than they already were. One involved a bathroom with a billowing shower curtain and another a very slow zoom into pitch black darkness while a character's face remained just in frame to the side. If neither scene really "paid off", the horror you felt for the characters in the moment was very real.
Posted by Bob Turnbull at 09:22