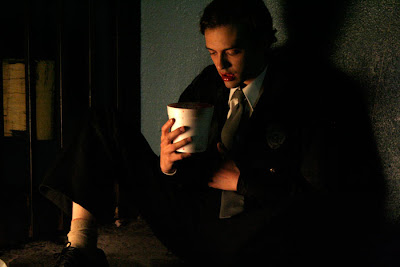 The vampire mythology continues to retain its hold on our collective imaginations as it works its way through film, TV shows, literature and, as many North American doorsteps will undoubtedly encounter in about a week’s time, fashion and costume design. There’s good reason – it taps into some deep seated fears of death reaching out to you anywhere, the intimate turning into the violent and your own life’s blood be drained away. Not to mention the promise of eternal life. It also comes with a whole variety of different aspects to the myth that can be added or modified to the same basic premise to allow for countless possibilities of stories to be told. Whether you like your vampires with wings, fangs or sparkles, the legend remains and the stories keep spawning from it. The latest example is Scott Leberecht’s many-years-in-the-making Midnight Son which takes yet another approach – strip the myth down to its basic elements and drop it into the real world. Akin to George Romero’s best film (IMO) Martin, but with superior acting and even more sympathetic characters, Midnight Son succeeds on just about every level as a storytelling vehicle: a genre exercise, a different spin on a well-worn legend, an examination of several themes (loneliness, self-realization) and a simple love story. It is easily the best told tale of the festival so far.

Jacob is a 24 year-old nighttime security guard at an office building. He’s pale, skinny and a fairly blank slate. His “skin condition” has forced him out of the sun since he was quite young and his apartment is sealed tightly from any external shafts of light. However, he seems to be undergoing even more health issues of late – though he eats everything in sight, he simply can no longer satiate his hunger. His sallow complexion is of concern to his doctor until one day Jacob stumbles on draining the juice from a raw meat package. He immediately notices how his system reacts to the red liquid and starts making regular visits to a local butcher for containers of animal blood (which he sneaks into work inside his coffee thermos). It’s yet another stumbling block on the road of life for Jacob and things become even more complicated when he meets Mary. She has her own problems (dead-end jobs and a blossoming coke habit), but the two have an easy rapport upon their first meeting. On their first date, they don’t even leave the apartment as Mary jumps him after stealing a rather large snort in the bathroom. This results in a nasty nose bleed that trickles into Jacob’s mouth and an even more intense realization from his body about what he really needs – human blood. Now the real challenge begins for Jacob. 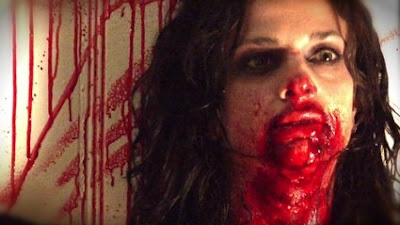 The biblical names of the characters are obviously not chosen by accident (though the commonality of “Jacob” with the Twilight films is – director Leberecht mentioned that he began the script before “Twilight” was a known entity) and Jacob indeed meets many personal struggles. Though he initially finds a possible source of human blood at the back of a local hospital in the guise of an orderly, he finds that it will be at the expense of others. His job is at risk due not only to his health but because his temper and inability to control a new strength may get him in trouble. He also worries that he may have killed a woman in the parking lot outside his office building, but he can’t quite remember. Most frustratingly perhaps, is the inability for he and Mary to actually make it through a lovemaking session as his vampiric tendencies keep trying to take over. To help ground the story in a “possible” reality, Leberecht has made an excellent decision to limit the vampire characteristics to two basic elements: need for human blood and aversion to sunshine. However, the strongest part of the film is the relationship between Jacob and Mary. They converse easily and the attraction between them is wholly believable. The dialogue feels natural and helps to create characters that keep you engaged. The performances by both Zak Kilberg and Maya Parish are exceptional and they carry every moment of the story. The whole cast though – from veteran Tracey Walter to relatively young newcomer Arlen Escarpeta – is superb, so credit must land with Leberecht as well in preserving the proper tone across a story that could easily fall into using standard genre tropes.

If there are any issues with the film, they are mostly minor. A somewhat flat look to the picture occasionally dilutes the otherwise quite beautifully lensed and composed images. As well, there are several plot points that seem somewhat forced or perhaps a tad too convenient. To nitpick is to miss the point though – this is a character based story whose theme of overcoming loneliness by being true to yourself makes use of familiar genre elements. Movies like Midnight Son ensure that the myth of vampires will be as eternal as Dracula himself.
Posted by Bob Turnbull at 07:43