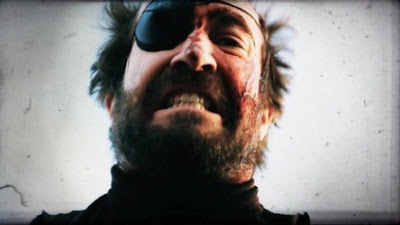 "Father's Day" is pretty much the perfect exploitation film. It will offend many with its graphic images and content (both bloody and sexual) while it embraces the anything-goes aesthetics of many of the films from the 1970s that range from impressively realistic gore to ridiculous use of stock footage. Its plot begins with a search for a serial killer and from there mutates with a speed and force rarely seen outside the viruses found in bad sci-fi movies. Strippers, priests, male prostitutes, bears, chainsaws, hallucinogens, demons, a visit to Hell and probably even a kitchen sink or two are smashed together, blended until each has been reduced to gooey chunks and then splattered back up on screen with a joyful exuberance. It's sick, gory, disgustingly gross and very, very funny.

However, let me be very clear up front: The opening 10 minutes of the film is extremely nasty stuff and enough to thoroughly repulse just about anyone but the purest of gorehounds. A rapist of fathers (it's explained that he doesn't like woman, but never stated why he only goes after the Dads) is on the loose and we join him in the middle of a particularly, um, gruesome violation of another human. Having seen the faux-trailer for the film last year (which led the Canadian filmmaking team Astron-6 to make a full version of the film for the folks at Troma), it wasn't really a surprise - that trailer is full-on Grindhouse at its ickiest - but that first section began to validate my fears that the movie was going to be completely in that same vein. A strange thing happens after a few minutes of this type of gore though - it's pitched so way over the top that you can't actually take any of it seriously and it becomes more of a parody than anything else (though a disgustingly Lurid one). Of course, nothing remains very stable in this movie for long. Even though a team of three band together to stop the evil Fuckman (yes, occasionally they stoop to juvenile humour), the father raping aspects of the plot mostly disappear. Not only was this rather welcomed, but it also fits right into the standard templates of the exploitation films - how many were actually faithful to their original concepts by the time they had run their course? There's still loads more bloodshed and what you might call "vivid" images, but once the humour kicks in it all meshes into somewhat of a thank-you card to these grindhouse style films. The actors (most of them members of the Astron-6 team) occasionally go for big emotional moments or speak in halting ways just like the "bad" acting that is associated with the genre, but it's obviously on purpose and isn't used to the extent that it becomes tiring or a single joke. They actually stay in their characters, have subtle well-timed comedic moments and never wink directly at the audience. Combined with the visual riffs on the genre (obvious rear projection footage during an explosion, etc.) and a willingness to change the plot almost on a whim, the film starts to pile laughs on top of absurdities on top of laughs on top of absurdities.

Which is why a description of the plot is relatively pointless. If you want to hear about where the story goes before deciding whether you want to see the film, you're approaching this particular movie all wrong. The Astron-6 folks have put together a loving tribute to 70s exploitation films that careens with controlled abandon across the genre's tropes, styles and limitations while never losing sense of the fun. Or the goo.
Posted by Bob Turnbull at 19:26