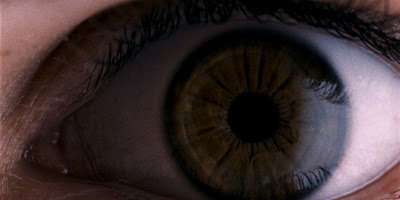 I've had my eye on Toronto After Dark the last few days (and the next few as well), so the output has been a bit slower. Some good solid movies in this batch...

Pin (1988 - Sandor Stern) - "Pin" is not your ordinary doll/horror movie. Partially because "he" is a medical mannequin (used as a teaching device) instead of a child's toy, but also because the film relies much more heavily on the psychological horror aspects of a young boy's development into an adult than any Chucky style attack. As young kids, Leon and his little sister Ursula are transfixed by Pin when their father uses it as a ventriloquist's dummy and teaches them certain lessons. Ursula realizes Pin is only a dummy at a young age, but Leon continues to think that Pin is an actual living being and part of their family. As he matures and can't count on his parent's support or help in typical growing up matters, he goes to Pin without his father being present (disobeying a strict order) and communicates with him. His father (another dose of Terry O'Quinn - that's two for the month!) decides to remove Pin from the house, but after a car accident leaves Leon and Ursula as orphaned teens, Pin becomes more and more of an influence to Leon's life. It's not filled with jump scares nor will it make you shiver in your seat, but it's something that aims at the horror of a broken individual. It's hampered occasionally by some inadequate acting in several roles (though David Hewlett as the older Leon is quite good), but it worked far better than I expected it would. 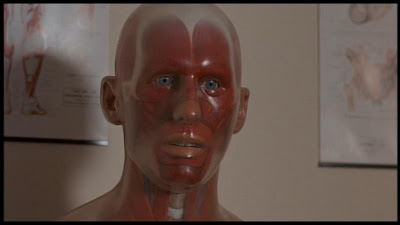 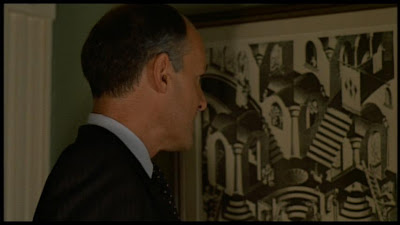 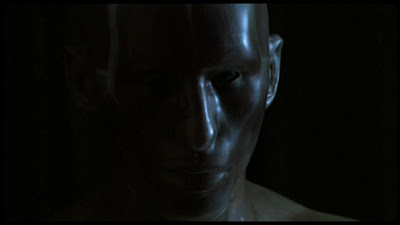 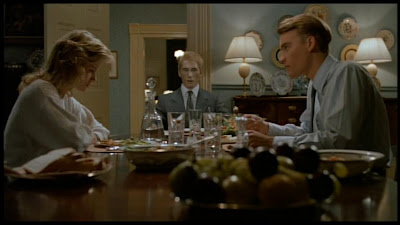 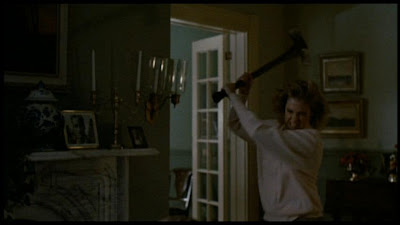 Amer (2009 - Helene Cattet, Bruno Forzani) - Gobs of style. Style piled on style over style - with style on the side. Cattet and Forzani's tribute to the cinematography and atmosphere of Italian giallos mostly dispenses with dialogue and even, to a certain extent story. It's premise focuses mainly on the sexual awakening of the same woman in three different stages - confusion (child), curiosity (teenager) & desire (adult) - with witches, murder and a variety of other real and surreal occurrences thrown in for good measure. It's quick cutting, very arty and may drive some people for the Tylenol (or the remote), but I loved it. It creates very specific moods for each of the three stages and though there appears to be very little resolution in what occurs, the trip through it all kept me completely engaged because of the tension of truly not knowing where any of the stories were going and how they would present the next images. The colour (particularly in the opening section) is glorious and pretty much every shot is unconventional. Certainly self-conscious, but still quite the beautiful thing to see - in particular if you like rampant usage of close-ups of people's eyes. Unnerving at times and a wonderful example of someone who wants to play and experiment in a given style.

Burnt Offerings (1976 - Dan Curtis) - In between making his two made-for-TV horror anthologies ("Trilogy Of Terror" and the recently viewed "Dead Of Night") director Dan Curtis snuck in this tidy slow-burn feature about a family that moves into an old mansion as caretakers for the summer. Oliver Reed and Karen Black play the parents and neither bring a whole lot of subtlety to their roles - which is perfect for a film like this. The owners of the house ask only that the couple leave a tray of food once a day for their elderly mother who lives in the room upstairs. "The house takes care of itself" they say and this becomes apparent as it slowly seems to rejuvenate as the family slowly falls apart. The father is haunted by memories of his own father's funeral (and a really creepy hearse driver) while Mom becomes strangely devoted to the unseen old lady upstairs as well as her daily house cleaning tasks. Their aunt (played by Bette Davis) is also with them and as her health starts to fail, she drives a further wedge between the couple. Her health woes certainly can't be due to malnutrition, though, since the sicker she gets, the more Davis chews the scenery. Again though, it's essentially in service to the film and its possessed house - the longer they stay, the more of themselves they give away. It doesn't all work, but it provides a perfect resolution and ends up being quite satisfying. And Karen Black always kinda creeps me out in these roles - you just never know how her characters are going to react. 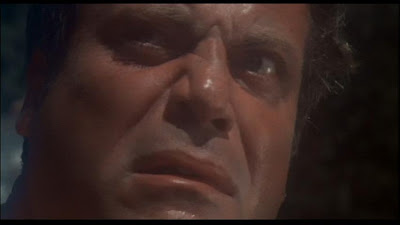 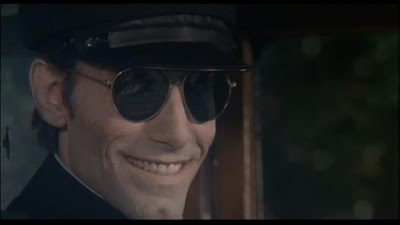 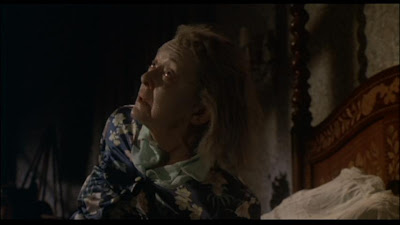 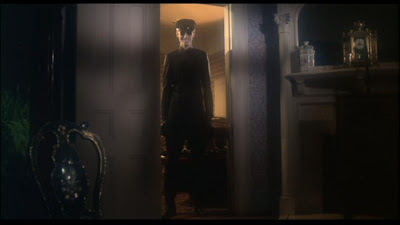 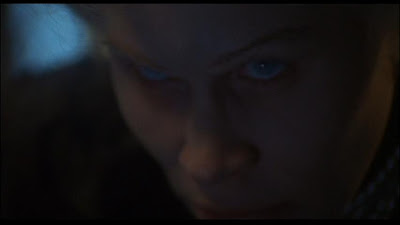 The Ruins (2008 - Carter Smith) - There were moments early on during "The Ruins" where I thought I had made a tragic error - I had heard this was one of the better recent Hollywood horrors, but during the character introductions I felt that I had seen these beautiful young people a hundred times before and therefore thought I knew exactly what I was about to see. Fortunately, I was quite wrong in my cynical assumptions. Instead of simply getting lost inside a set of old ruins while each dull character gets killed off by old supernatural ghosts, the story sets up a more horrific natural threat - the vines that grow on and surround the off the map pyramid-like structure the characters have come to visit after their week of partying in Mexico. It sounds a bit silly (and certainly is at times - particularly those flowers that mimic sounds), but along with the additional issue of being stranded on the ruins in the jungle surrounded by locals who won't let them leave (in order not to allow the plant lifeform to spread elsewhere), it sets up a fine scenario that lets you play "what would I do?" while the characters work through their own options. One of the most terrifying aspects are those locals - not because of any of their specific actions, but it's their inaction that is frightening. Instead of helping or even simply killing these trespassers, they have forced everyone who has come into contact with the plant to remain on the ruins knowing full well that the vines will take care of the problem for them. There's some needless gore in a few sequences, but overall it mostly avoids the obvious and spins out an effective tale of terror. 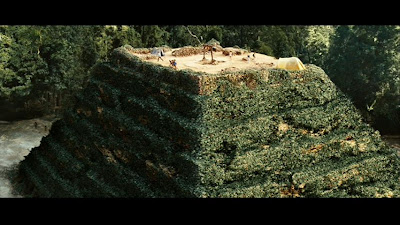 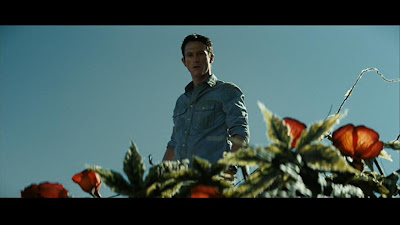 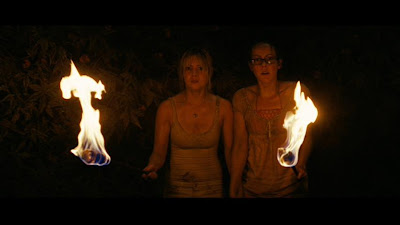 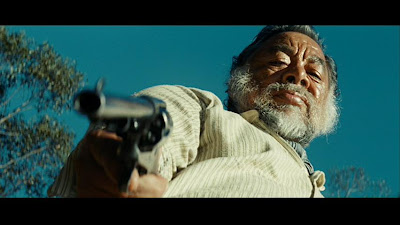 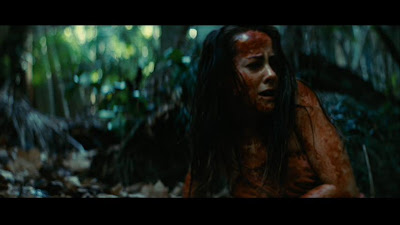 I was disappointed that Amer never got a theatrical run of any kind in Denver. I can also understand why it might not have gotten much commercial traction as audiences seem to need everything explained to them. Hopefully more people will discover this gem on DVD.