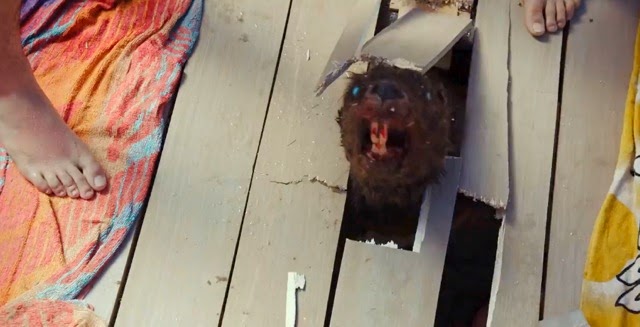 The best thing about Zombeavers is that it isn't much more than its title implies. It creates a toxic spill in a remote area then plops a bunch of college kids in a cabin right next to it. Voila - zombie beavers attacking young co-eds. It also stays true to its 80s horror antecedents by making most of the gore and effects practical. CGI beavers would have ruined the film entirely, whereas these stuffed critters with partial animatronic characteristics and clunky tails do the trick nicely. When they come crashing through floor boards, they almost feel like they could chew your foot off. Of course, they are also just slightly ridiculous enough to laugh at when they suddenly show up in a bathtub or at the front door. Especially with their light blue glowing eyes...

The worst thing about Zombeavers is, well, that it isn't much more than its title implies. Now that shouldn't be taken necessarily as a criticism...It's just that when the film works, it works so very well. So when it doesn't, it's somewhat disappointing. The film handles its action sequences very well and has moments of pretty inspired humour & gore, but then there are several scenes of bland, lengthy or even pointless chatter between the characters. Given the funny outtakes at the end of the film (some of which felt a bit like those line-o-rama special features many comedies have these days) and considering Judd Apatow, David Wain and others are thanked, I couldn't help but want a bit more ooomph to the script. In fairness, my complaints are along the lines of wanting more than I'm really entitled to or should in any way expect. But it's to the film's credit that at some point - I did expect more.

Another thing about Zombeavers is that it sometimes is actually a bit more than its title implies. Think you know who's going to get it next? Think the kills will all be based on levels of morality? Think you know how the beaver bite transforms its victim? Probably not...Not that the movie rolls out loads of surprises, but just enough so you aren't completely sure of what the next scene may bring. One might even say that there's just enough subversion of this type of genre to raise the eyebrows of those looking for simply a genre-throwback. On top of that, the cast does quite well with the material and only falter during some of those slower spots (though those moments could easily be "blamed" on pacing issues or editing). All three of the leading ladies (Cortney Palm, Rachel Melvin & Lexi Atkins) acquit themselves quite nicely through tears, screams, laughs and loads of prosthetics.

In the end, it's a movie about beavers who become zombies. That alone should be enough, but you get more (including a great final "stinger"). So go enjoy Zombeavers. 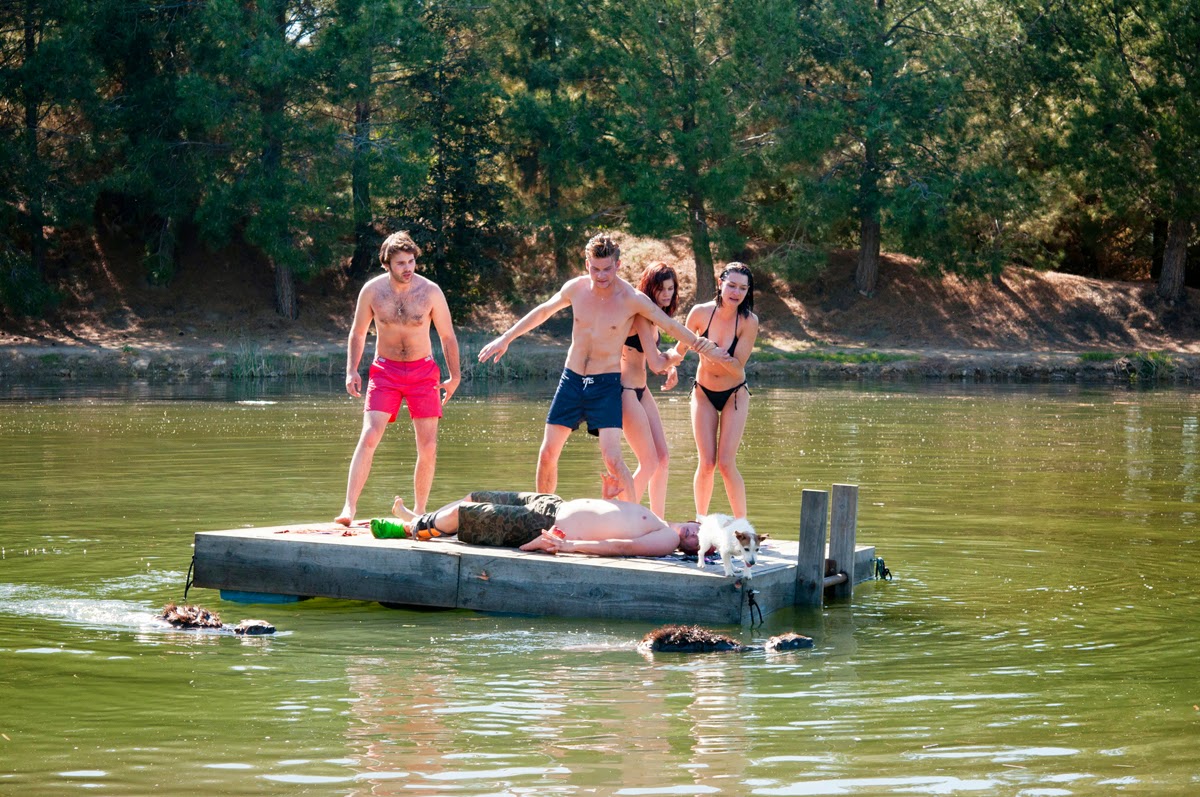