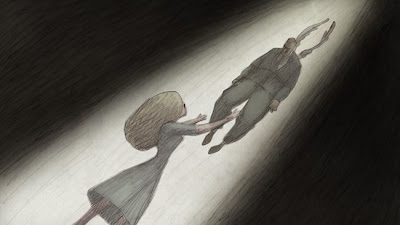 When I initially viewed the trailer for Bill Plympton's wordless animated feature "Idiots And Angels", I thought that it might be a difficult task making it all the way through its roughly 80 minute run time. The style of animation and muted palette indicated that it might wear on my senses after awhile and without any dialogue I expected a long road ahead. Within the first 5 minutes however, my expectations were totally turned around...

With all due respect to Pixar and Studio Ghibli, I would love to see a film of this variety at least get nominated for an Oscar for Best Animated Film if not win it outright (simply because it would bring more attention to a wider audience). There is a constant high level of inventiveness throughout the film that not only helps create some odd but interesting characters and situations, but plays with different angles, perspectives and transitions between scenes. There's no need for dialogue in the film - not only because you are continually sucked into these wonderful bits of animation (water drops from a shower that morph into a toothbrush which then morphs into a cereal spoon; the dancing barmaid who loves the Spanish music TV station; etc.), but simply because the story and characters are so well laid out. 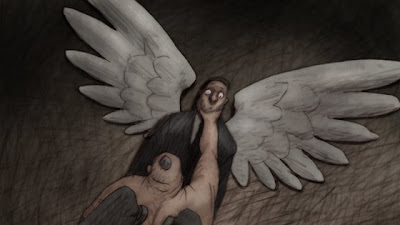 The story isn't really overly complicated though...Every morning a very angry man wakes up, throws his alarm clock at a chirping bird and grumbles his way through his day which seems to mostly include enjoying the misfortunes of others and drinking at a local bar. Then one morning he wakes up to discover two small wings growing out of his back. He removes them, but they grow back, reach fully grown size and his life begins to change. The bar patrons laugh at his new appendages, but there is jealousy as well since these wings can be used for a variety of purposes. The biggest change though is that this angry man is prevented by the wings from committing any further evil or nasty acts.

There's a wide variety of human behaviour that the film taps into, but it seems to settle mostly on the consequences of good and evil actions. Even though selfless acts with good intentions can immediately be of worth to others, the personal benefits may not be as obvious to the one performing them. So why do people choose to behave in certain ways? The film doesn't necessarily attempt to answer that specific question, but it does show that there are several ways of earning your wings.

Plympton has been nominated twice for an Oscar for Best Animated Short, but I'd love to see him move up to the long form class this year. The animation speaks for itself. 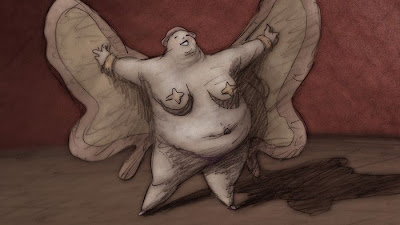 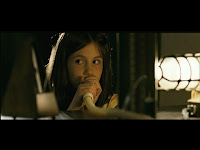 Without a doubt one of the best looking and most professional of this year's short films is David Birnbaum's Found Objects. Set who-knows-where and who-knows-when, the kids of an apartment building are trying out for some kind of musical production and are being assigned a variety of instruments. Meanwhile, bombs are exploding non-stop outside the building. There's no explanation for any of this (as with the feature, there's no dialogue) and while I'll admit I didn't fully understand what the film was trying to do, it absolutely succeeded in creating a unique environment and atmosphere.
Posted by Bob Turnbull at 08:58

Email ThisBlogThis!Share to TwitterShare to FacebookShare to Pinterest
Labels: Toronto After Dark 2008