I finally managed to catch up with Pixar's latest magical entry into the world of animated films - WALL-E. I may be late to the party, but I'm no less enthusiastic about it.

Possibly more...Several scribes have mentioned that they wish the entire film was like the first 30-35 minutes (which all take place on Earth without a stitch of dialogue) and that things aren't quite as great once more characters join the fray. I can see where they're going with that - a 90 minute animated film with two non-verbal characters would be extremely interesting and Pixar could indeed pull it off. But I love what we get here...The humans are certainly the least interesting characters of the bunch, but they do still provide a great deal of humour and some good action scenes (e.g. the captain's battle with Auto). And without WALL-E and Eva rendezvous-ing with the main ship, we wouldn't have met all the other great robots. The focus remains those two, but the outer edges of the film are nicely packed with all the rest.

Though I gave up reading the reviews awhile back (they were overwhelmingly glowing), I don't think I saw anyone mention the great end titles sequence. I suppose there's some spoiler issues with doing that, so stop now if you haven't seen the film...

The credits show the humans rebuilding their ways of life and re-learning pretty much everything - from creating fire to building structures - though this time with the help of robots. The most striking portion, however, was just before the crawl of names when we get a short sequence of a few beautifully rendered scenes (mapping to the styles of some famous artists) to show that the humans have re-learned the importance of art: 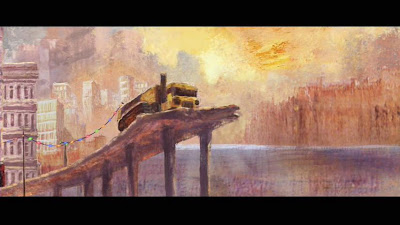 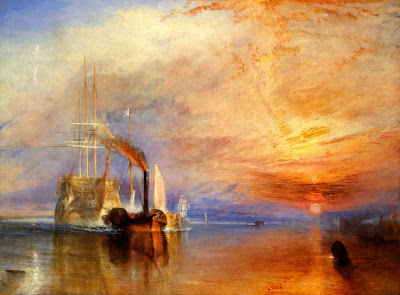 "The Fighting Teremaire Tugged To Her Last Berth To Be Broken Up"
J.M.W. Turner (1838) 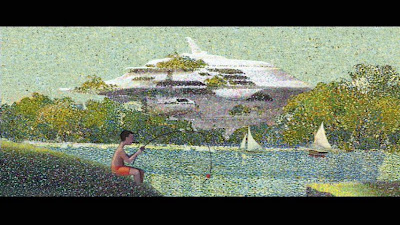 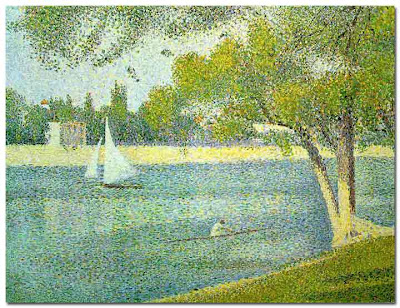 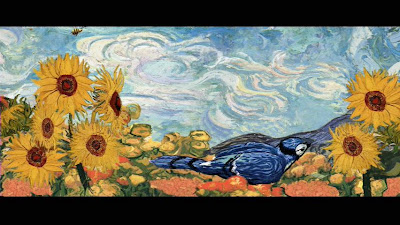 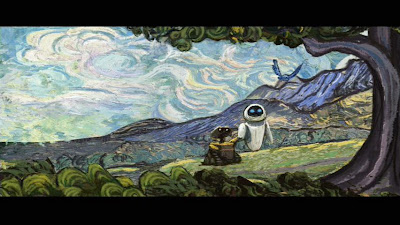 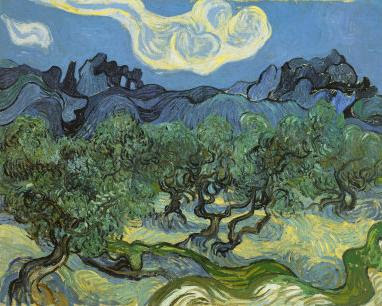 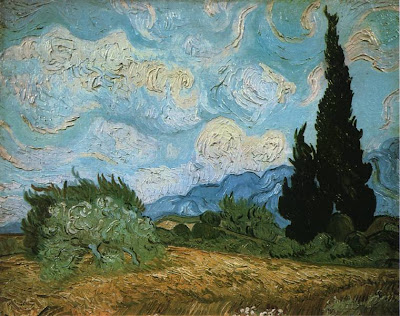 An absolutely wonderful and perfect end to a glorious film.
Posted by Bob Turnbull at 08:08

wow...thanks for putting those pics side by side!!

Glad you liked them. The credits put a huge smile on my face when I watched the film. I can't praise Pixar enough...I liked "Ratatouille", but this is one of their best.

One of the best closing credits sequences EVER. Brought a smile to my face to see these side by side, but I like that the credit sequence ties into the theme of the movie that art evolves (even pappy-sappy Hello Dolly! can be transcendent under the right circumstances). That the WallE credits gives a visual history lesson on the emotional value of art thru the ages is pretty inspiring.

When I first started hearing about WALL-E I was looking forward to it, but I wasn't sure if my 8 year old would like it. I heard a few folks say that it was too slow in the beginning and that kids would get restless. Pshaw. Not a problem - he loved it.

And the short film Presto on the DVD (which I assume was the short that preceded the film in theatres?) had us all in stitches.

Wait a minute. I saw Wall-E twice in theaters. Did I just not stay long enough? I'm not a "stick around" type of movie watcher, I guess. Were these in the theatrical cuts or the DVD? Now that I think about it, is the DVD even out yet? I might have missed seeing these awesome credits and that makes me sad.

Don't know as I only saw it on DVD (yep, it's out), but I would guess that it's part of the theatrical release too. The screencaps are near the end of the first part of the credits (the entirety of which show the humans relearning everything all over again with help from the robots) just before it cuts to the remaining credits with black background (and some of the characters running around the scrolling words).

I just watched Wall-E for the first time two nights ago and I too was quite taken by those closing credits! Thanks for posting! :)

Hey, thanks for putting these together. I've just sat through Wall-E with my 6yo daughter (for the 2nd time on bluray, plus the visit to the cinema earlier). Trying to describe to a 6yo how the imagery in the credits reflects the progression of human art is tricky, but drawing the comparisons with these great pieces of art was simple thanks to your page.

My only suggestion would be to include Van Gogh's Sunflowers.

Yeah, the theatrical release included these credits, including the "BnL" ident right at the end.

A wise word from a life-long Pixar fan (since Tin Toy, Red's Dream and Luxo Jr); always sit through the credits - since Toy Story 2 (I think) there's been fun little nuggets in the credits.

Robyn, thanks for the comment way back...Apologies for not responding sooner. Glad you enjoyed the credits too.

Thanks config. I'm glad I may have somewhat helped in providing some early education for your daughter. You know, I had initially looked at Sunflowers, but it didn't seem to fit as well and didn't have the range of colours. I decided to stick with a couple that had the swirls in the sky and some olive trees...

I found this site using [url=http://google.com]google.com[/url] And i want to thank you for your work. You have done really very good site. Great work, great site! Thank you!