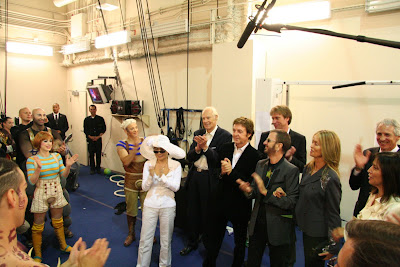 George Harrison had an idea. Well, OK, he had lots of ideas, but in this particular one he envisioned (after meeting Cirque Du Soleil founder Guy Laliberte) that a whirling musical feast for the eyes show should be built around Beatles tunes. He passed away before the concept made it to development, but his passion seemed to stay with it. Not music rights issues nor creative differences nor even the threat of massive backlash from Beatles fans could stop the idea from coming into being. This film is more than a simple chronology of events leading up to the unveiling of the final creation (eventually to be entitled "Love") - it's a celebration of the Beatles and their music.

Director Adrian Wills takes a goldmine of access (Ringo, Paul, Yoko, George Martin, all the Cirque staff, etc.) and subject matters that really speak for themselves and manages to create a whole that is larger than the sum of those parts. Instead of just a simple behind the scenes film, he skillfully weaves several storylines together without missing a stitch. In one of the main components of the film, musical director Sir George Martin (along with his son Giles) struggles with showing reverence to the original material while also creating something new. His solution was to use only music originally recorded by the Beatles, but to incorporate versions or takes that are not on the studio albums. By piecing together these bits and mixing songs together, the soundtrack becomes a brand new work. 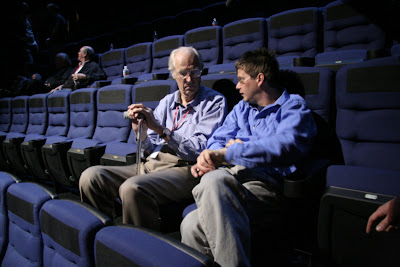 In another of the main arteries, we follow the creative process of show director Dominique Champagne. Somewhat saddled with the looming presence of Yoko and Olivia, the wives of the departed Beatles, he must keep to the original vision of the show. Cirque Du Soleil are just as fierce as The Beatles when it comes to creative control, so of course there are stumbling blocks to overcome. The wives are incredibly loyal to their husbands' legacies so it never once feels like any of the problems are of the useless meddling type. Further interviews with Olivia and Yoko add to the story and expand on the Beatles past. Of course there's also plenty of archive footage and Beatles music thrown in and this leads to interviews with the surviving Beatles. Paul and Ringo both come across as open, relaxed and friendly.

A young African dancer completes the mix of stories. Not only does he need to cope with the Montreal winter (as the show prep is handled there before everything is moved to their new home theatre based in Las Vegas), he isn't used to the gymnastic nature of the Cirque. His story falls somewhat by the wayside as the movie gets closer to the premiere date, but it still adds a great deal to the experience of putting something of this size together. His dancing fits in with the troupe though, since the show doesn't seem to be quite as acrobatic as previous ones. The bits of the final show we do see certainly are dazzling though - in particular a scene with a white VW Beetle that flies apart into dozens of pieces after striking a woman in red.

Terrific applause followed our screening and led into a relaxed Q&A with Giles Martin. He spoke of how wonderful it was to collaborate with his Dad for two and a half years on this project. Time well spent - for both him and the rest of us.


And just because I can, here's the song "All Together Now" from "The Yellow Submarine":